We’ve seen quite a few Meizu-related leaks and rumors in the last couple of weeks. This China-based company will host two press events next month, and even though we still don’t know what will they announce, we can make an educated guess at this point. Meizu will almost certainly going to introduce the Meizu M3 Note mid-ranger, and the Meizu MX6 or PRO 6. It seems a bit early for the PRO 6, but the device has surfaced on AnTuTu, Geekbench and GFXBench recently, and the company has released some official info regarding the device as well.

That being said, a new piece of Meizu’s puzzle has surfaced, though this time around not specifically regarding the Meizu PRO 6. According to the newly leaked info, the company plans to introduce 7 smartphones this year, The devices listed on this image are: Meizu M3, M3 Note, Metal 2, MX6 Mini, MX6, PRO 6 Mini and PRO 6. Now, we’re almost certain that the Meizu M3, M3 Note, Metal 2, MX6 and PRO 6 will be announced this year, but we’re not all that sure when it comes to the rest of the devices on this list. Meizu has cancelled the release of the PRO 5 smartphone recently, and we somehow doubt that both the MX6 Mini and PRO 6 Mini will see the light of day, but who knows. This list comes from a third party source, and it is possible that it is not all that accurate. Having that in mind, there are some additional details regarding every single of these devices included in the image down below. The list claims that the Meizu PRO 6 will be fueled by the Exynos 8890 SoC, even though Meizu already confirmed that MediaTek’s Helio X25 processor will ship with that device. This, of course, makes us doubt the accuracy of the leaked info, but if you’d like to check it out after all, take a closer look at the image down below.

Our sources at the company confirmed recently that Meizu plans to introduce new hardware next month (new flagship included), and that it will host two press events, as already mentioned. It will be interesting to see if Meizu plans to jump the gun and introduce the PRO 6 only 6 months after its predecessor, or will they maybe introduce the Meizu MX6 next month? Well, we’ll see, stay tuned. 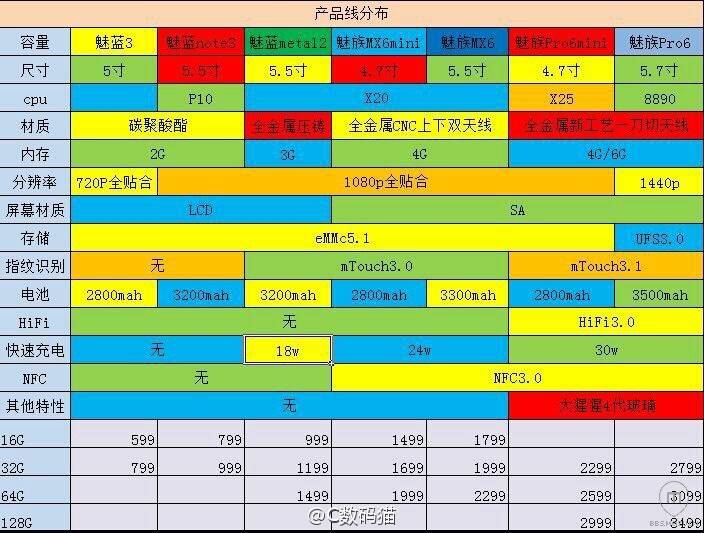