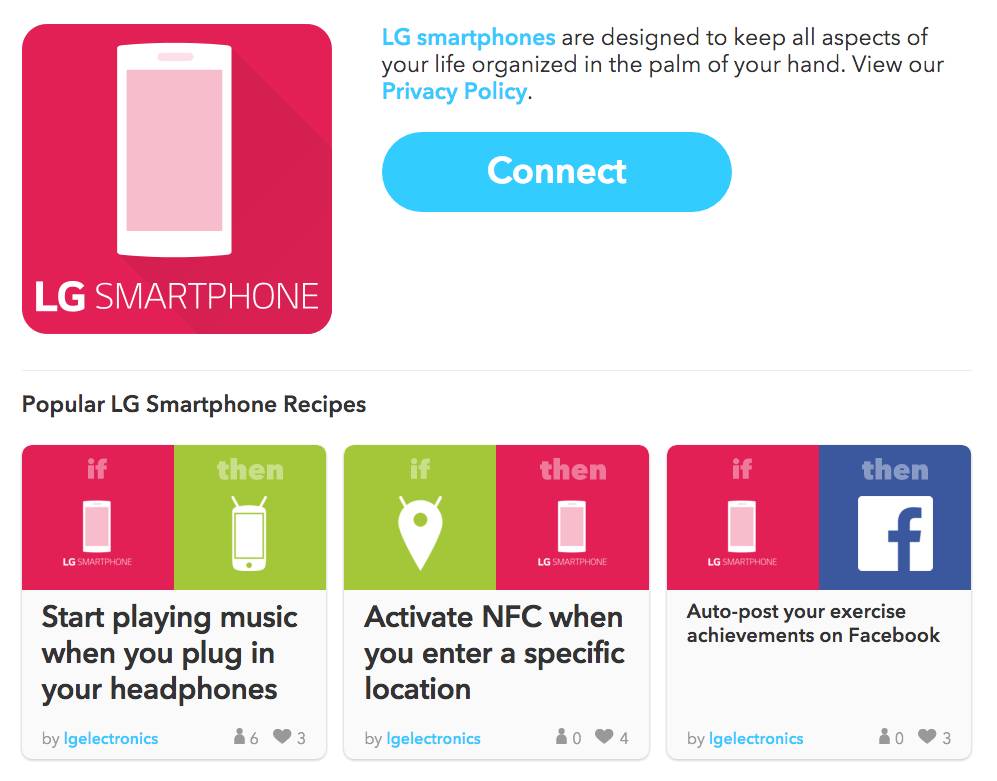 IFTTT isn't anything new, it's been around for quite some time. The thought-process behind IFTTT is to basically automate the internet for you. With IFTTT you are able to do things like automate when your smartphone will go on silent, or send your Instagram pictures to Twitter (seeing as Twitter killed the option for Instagram pictures to appear as pictures and not links on their site), and there's so much more. Especially with Philips Hue and Belkin Wemo being part of the fun. Now, LG appears to be joining in on the fun. With their own "LG Smartphone" channel appearing on the service.

According to the description:

"LG smartphones are designed to keep all aspects of your life organized in the palm of your hand."

Some of the sample recipes that are available include start playing music when you plug in your headphones, active NFC when you enter a specific location, Tweet your exercise goal achievement and so much more. With it being compatible with every other channel that IFTTT has, there's no limits to what you can do with the LG Smartphones channel. Currently, it is limited to just the LG V10. So it is a bit limited right now. However, it'll more than likely be compatible with upcoming flagship devices from LG, including the LG G5 which is slated to launch in early April. One recipe that would be really cool, especially if you have Philips Hue lights in your home, is to set your phone to turn those lights on when you pull into your driveway, and turn off when you leave your driveway.

LG has been adding some pretty cool features as of late to their smartphones. And this new channel for IFTTT is the newest. While it may be a small deal to some, or worthless to others. Those that are hardcore users, will love this feature. It's something that no other manufacturer has done so far. The others are limited to a few triggers and actions that are done with the app. And with this channel, you don't need to have the app installed. It's likely that you'll be able to do even more with the LG G5, and that the LG V10 was just to get things started.