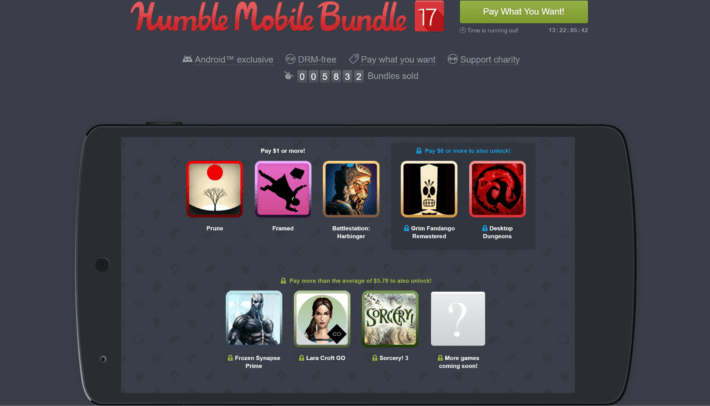 Humble Bundle is a staple in the gaming community, offering up what were once bi-weekly packs of games for various platforms, including mobile devices which would sometimes contain a themed combination of mobile game titles for smartphones and tablets running on Android. Last year Humble Bundle officially announced that they would no longer be doing a new mobile bundle of games every couple of weeks that were only offering mobile titles, and would instead focus on putting out great game packs that would contain a mix of both PC and Android games although they are usually more geared towards PC. This didn't mean that Humble Mobile Bundles were going away completely, just that they wouldn't be around as often, yet they would show up once in a while.

Today, Humble Bundle has announced their seventeenth mobile game pack with the launch of the Humble Mobile Bundle 17, which contains a collective of eight games, three of which you can have by simply paying $1 including Pruned, Framed, and Battlestation: Harbinger, while the others are available for unlock after paying a specific amount. As with every single Humble Bundle, this bundle of games will offer up three additional titles which users can unlock if the pay the average price which is currently sitting at $5.78 at the time of writing. These three games are Frozen Synapse Prime, Sorcery! 3, and the ever-popular Lara Croft GO from Square Enix. By paying the average amount, consumers also unlock any future games added to the bundle and they get those games without having to pay any extra money. These games haven't been revealed just yet, but they usually appear after the first week the bundle has been live.

Lastly, Humble Mobile Bundle 17 comes with two more games which can be unlocked and acquired by paying $6 or more which also unlocks any future games added to the bundle down the road, and these two games are Desktop Dungeons and Grim Fandango Remastered. Humble Bundles last for two weeks, and mobile bundle 17 was just launched a couple of hours ago so there is plenty of time to grab these great games before the bundle disappears. Having said that, the more time that passes before consumers pick up the bundle, the more chance there is that the average price will increase, so getting it earlier is usually beneficial to the wallet.