HTC has released some really compelling devices back in the day, and their ‘One M’ devices were amongst the most popular smartphones this company has ever released. The One M7, M8 and M9 have been launched by HTC in the last three years, and the company is planning to introduce their successor soon. HTC has already started teasing the arrival of the new flagship, and they’re using the ‘PowerOf10’ hashtag. Now, most people are expecting HTC to introduce a handset which will go by the name One M10, but that might not be the case, read on.

According to a new tip from @evleaks, HTC’s all-new flagship will be called ‘HTC 10’, without the ‘One M’ part. Now, the tipster didn’t exactly elaborate his tweet, he only shared the naming and ‘you heard it here first’ caption along with it. This is actually quite interesting considering the fact that the ‘HTC One M10’ naming surfaced recently on HTC’s website as part of the HTML code. It is possible that HTC kept the ‘One M10’ naming and is using it as a codename for this phone only, who knows. HTC has begun teasing their new flagship, but the company still didn’t reveal when will they launch it. The One M9 was introduced in March last year, so it is possible HTC plans to hold an event before the end of this month. If that’s the case, the company will surely reveal the date soon and send out invites.

We don’t have all that much info when it comes to this phone’s specs, but we do know that it is expected to resemble the HTC One A9. This handset will quite probably sport a 5.2-inch display, at least according to rumors, though it is possible HTC will opt for a bigger panel, 5.5-inch for example. This phone will pack in 4GB of RAM, and chances are we’ll see more than one internal storage variant of this smartphone. If a recently leaked image is to be believed, the HTC 10 might sport a 12-megapixel snapper on the back, much like the Galaxy S7, but we’ll see. Android 6.0 Marshmallow will come pre-installed on the HTC 10, and on top of it, you’ll find HTC’s proprietary Sense skin. 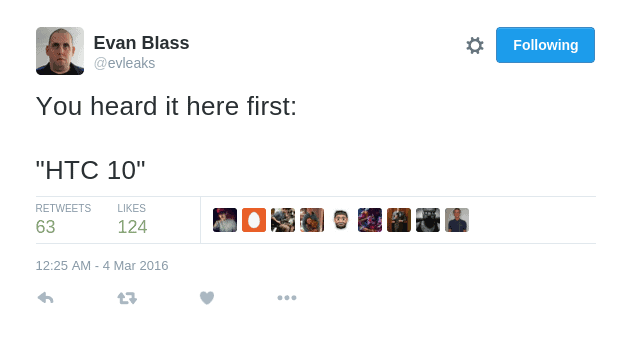