The HTC 10, which is expected to be the Taiwanese vendor’s next-gen flagship smartphone, has been leaked fairly often over the past few weeks, leaving hardly any of its hardware specs or software features unknown before its official announcement on the 12th of next month. As if previous leaks were not enough to give us a good look at the spec-sheet of the upcoming device, the handset has now been listed on the GFXBench database. This latest leak pretty much reiterates what was already known about the upcoming HTC smartphone, which is poised to take over from the HTC One M9 as the company’s 2016 flagship. However, it’s important to remember that none of the leaked specs have been officially confirmed by the company as yet, so we’ll have to wait until April 12th to know more details regarding the upcoming device.

Be that as it may, the GFXBench listing gives us yet another look at some of the important hardware specs and software features on HTC’s upcoming flagship smartphone. That includes a 5.15-inch QHD (2560 x 1440) display, along with 4 GB of RAM and 32 GB of storage. The device will be powered by Qualcomm’s brand new Snapdragon 820 chipset which comes with a quad-core CPU with custom Kryo cores and the Adreno 530 GPU that’s said to be significantly faster than the Adreno 430 found on the Snapdragon 810 SoC. As for the imaging capabilities on the upcoming device, the rear shooter is expected to sport a 12-megapixel sensor, whereas the front-facing selfie-cam will be a 5-megapixel unit.

The phone is also expected to feature an array of additional goodies, including a fingerprint scanner and an NFC chip, making the device potentially compatible with mobile payment services such as Android Pay. One interesting thing that does come out of the listing, meanwhile, is that the default camera software for the HTC 10 is apparently lacking in the HDR feature even for still images, which certainly seems a little surprising. Either way, HTC is scheduled to make the official announcement in a couple of weeks from now, so it shouldn’t be long before we get to know more about what HTC has in stock for everybody. 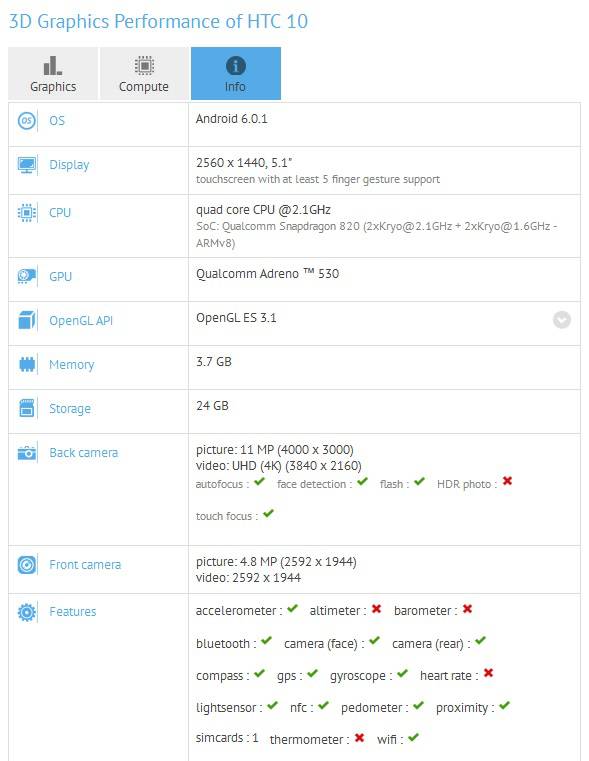