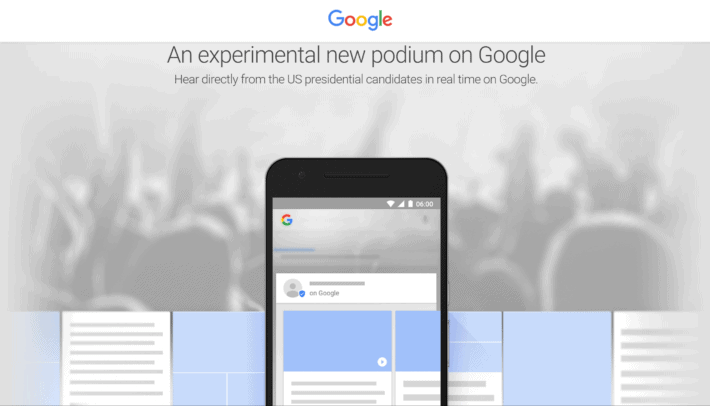 Google Search is probably one of the most used sites on the internet, and every day millions of people online use Google to find information they're seeking on tons of various topics from recipes to movie times to information about the upcoming 2016 U.S. Presidential election. Google has always tried to improve search to allow users to find the most relevant content they want, but now with a new experiemental feature for search Google is making things even easier to get a hold of important information. The new feature is called Google Posts, and it's currently aimed squarely at the 2016 U.S. presidential candidates so they can communicate with people in real-time through Google Search.

Posts allows candidates to publish text, images, and videos right to Google immediately, giving people a way to hear straight from the candidates themselves instead of the media or other outlets reporting on them. Since the feature is only in an experimental stage right now, Google is only allowing presidential candidates to use it, but they do have plans to open it up to other influencial figures in the near future. They also have plans to allow for various organizations to publish directly to Google with Posts at some point as well.

If you're someone who is interested in being a part of Google Posts, there is a way to get started, however there is one caveat. Google won't be allowing anyone else to publish directly to Google in real-time just yet, and there is a waiting list. Anyone that is interested in having this capability will have to join the waiting list as per Google's request if they want the possibility to post directly to Google search in the future. There are no details given by Google as to how long the wait list is or if everyone that requests to join will get acceptance. Considering this, it's likely a really good idea to join the waiting list as soon as humanly possible so you're on it much sooner. The longer the wait to do so, the longer the list is likely to become. For candidates, and once Posts opens up to more people, publishing according to Google is fast and anything published will show up with search results for that candidate, person, or organization immediately.