Gionee is not exactly the most popular China-based smartphone manufacturer, but consumers in China and India seem to be quite interesting in their products. Gionee has released the Elife E8 flagship phablet last year, and a couple of big battery ‘Marathon’ smartphones as well. As far as this year is concerned, Gionee has unveiled their Gionee S8 handset during the Mobile World Congress (MWC) in Barcelona, but the device hasn’t been available for purchase to this day. Well, the company has now officially released this handset in China as well, but that’s not all, read on.

The company has officially released not only the Gionee S8 in China, but the much leaked Gionee W909 as well. The Gionee W909 is actually a clamshell smartphone which has surfaced both on Geekbench and TENAA (China’s equivalent to the FCC) quite recently, and we knew that it was going to be announced today. Let’s kick things off with the W909, shall we. This smartphone sports two 4.2-inch IPS displays which are 720p (1280 x 720) in resolution. The device is fueled by the Helio P10 64-bit octa-core SoC, and it will ship with 4GB of RAM and 64GB of internal storage (expandable up to 128GB via a microSD card).. The 16-megapixel snapper is placed on the back of this phone, and a 5-megapixel shooter is available up front. Android 5.1 Lollipop comes out of the box here with Gionee’s custom UI, and a 2,530mAh battery is also a part of this package. The Gionee W909 sports a leather back, and a Type-C USB port on the bottom. The device measures 124.1 x 62.8 x 16.5mm, while it weighs 207.7 grams. 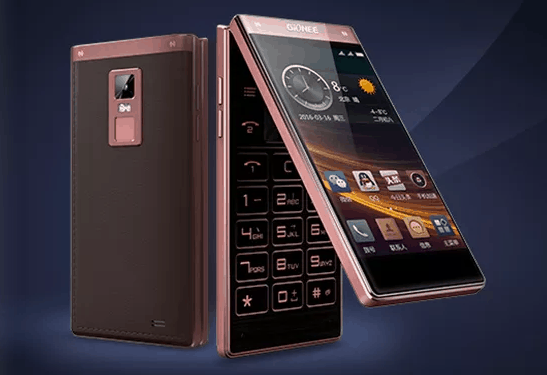