According to the latest report from Germany’s largest market research institute, GfK SE, smartphones are no longer the hot-ticket item they once were. In the final quarter of last year, overall smartphone sales increased by 6.4 percent globally, but revenues from the sector decreased nominally by around 0.2 percent. While a whopping 368 million smartphones were sold worldwide during the period, the decline in revenue is on account of the lower per-unit selling price of handsets, with vendors mostly from China and Taiwan flooding the market with high quality handsets at a third to a quarter of the prices of flagship devices from the big names in the industry, including the likes of Samsung Electronics and Apple Inc.

Global revenues from smartphone sales reportedly remained flat at $115.2 billion during Q5, 2015, as compared to $115.5 billion for the same period in 2014. As for aggregate sales, the number rose from 346 million in Q4, 2014 to 368 million during the October-December quarter of last year, powered by strong growth in the MEA (Middle East and Africa) and Emerging APAC (Asia Pacific) countries. According to Mr. Kevin Walsh, director of trends and forecasting at GfK, “Despite a record fourth quarter – and a strong performance in 2015 in general – there are mixed results across countries. Local factors, rather than regional and industry trends, are increasingly driving markets. Diverging economic trends, device saturation, mass market adoption, politics, social change and even sport have an impact on smartphone demand and prices at country level”.

While smartphone sales either slowed down or remained flat in most regions around the world during Q4, 2015, GfK notes that India remained a key growth driver for the sector during not just the last quarter, but the whole of last year, with a 34 percent growth on a YoY basis. Sales were even stronger in the country in the sub $100 price range, which saw a YoY growth of as much as 76 percent during the period under consideration. China too did plenty well for itself, with a 12 percent YoY growth signifying that there’s still some steam left in the market. GfK observes that “With a volume growth of 11m units, China contributed half of the global growth in the last quarter”.

The astounding growth in the sales of entry-level handsets, however is not just an emerging market phenomenon, if the report is anything to go by. Large Western European markets like France, Germany and the UK all grew significantly during the period, with a whopping 61 percent growth in the entry-level (sub $100) segment and 5 percent volume growth overall. GfK is forecasting that global smartphone sales will show steady growth at 7 percent during the current calendar year, thereby going past the 1.4 billion unit mark for the first time. 1.3 billion smartphones were reportedly sold during all of last year. The revenue growth, however, is expected to be only around 0.5 percent, denoting once again the increasing popularity of budget handsets worldwide. 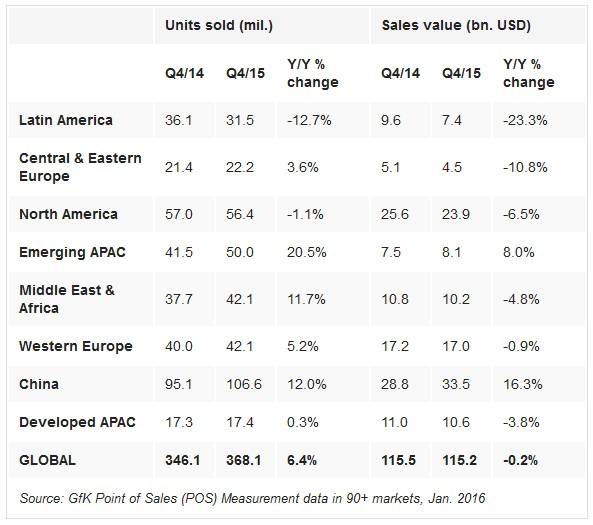 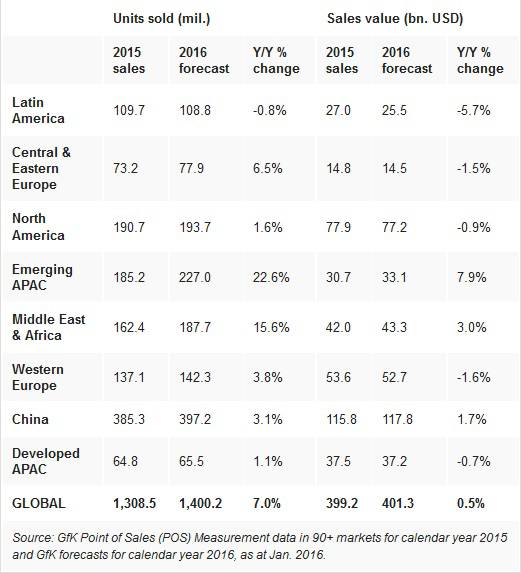