Samsung announced the Galaxy S7 and Galaxy S7 Edge towards the end of last month, and ever since, users from many regions have been able to pre-order both of the phones and make sure that they are one of the first to get their hands on them. Even though these phones are not set to be released until March 11 in many countries, some lucky users have already received their devices and it is now being reported that some users of the Galaxy S7 Edge are already receiving an urgent software update.

The Galaxy S7 Edge is quite an improvement compared to its predecessor, even though the overall design hasn’t changed that much, the new phone features a larger display which, once again, curves around the edges. The hardware of the Galaxy S7 Edge is now rated IP68, making it resistant to water and dust. Even though the battery is still non-removable, its size grew significantly and the phone now integrates a 3,600 mAh battery. Another welcomed feature included is the microSD card slot which offers expansion of the internal memory. The curved part of the display on the Galaxy S7 has gotten more useful, as the new Edge Panels feature displays twice the amount of content, when users slide their finger from the edge of the screen.

Despite the update being categorized as urgent, the only mentioned changes are expected for the Edge screen and the update only weighs in at 3.32 MB, so the improvements may not be immediately noticeable. Still, Samsung mentions that it is important to update as it prevents errors from happening. It is believed that the update brings support for additional apps designed specifically for this area of the screen on the Galaxy S7 Edge, the new apps can be downloaded from Samsung’s proprietary app store. Other users have noted that the screen is too sensitive around the edges and it gets activated by accident as they hold their device, so it would be useful if this update addressed that small issue as well. Users will likely get a notification to download and install the update, but they can also manually check for the update by going into Settings and tapping the Software Update button. 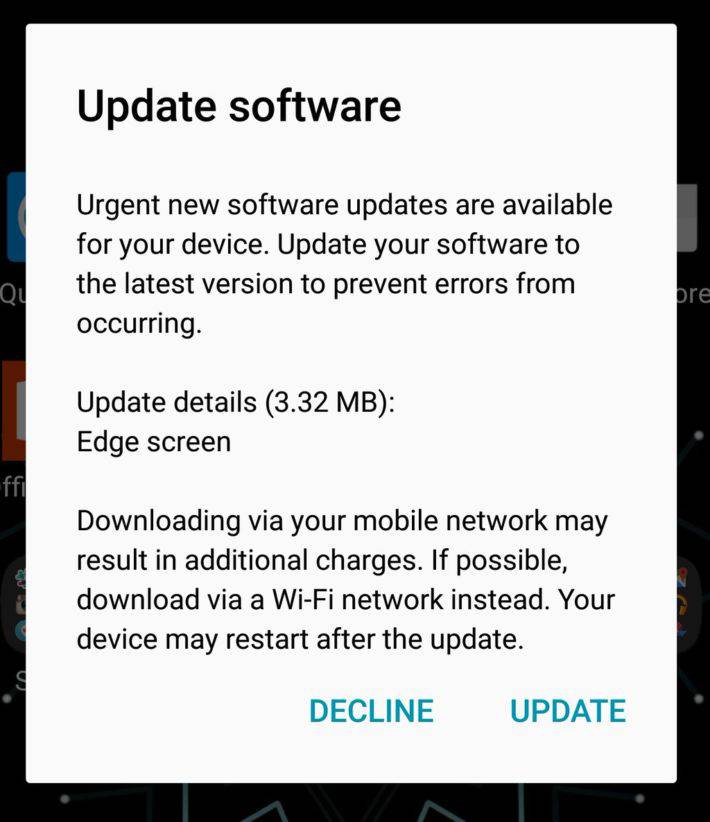