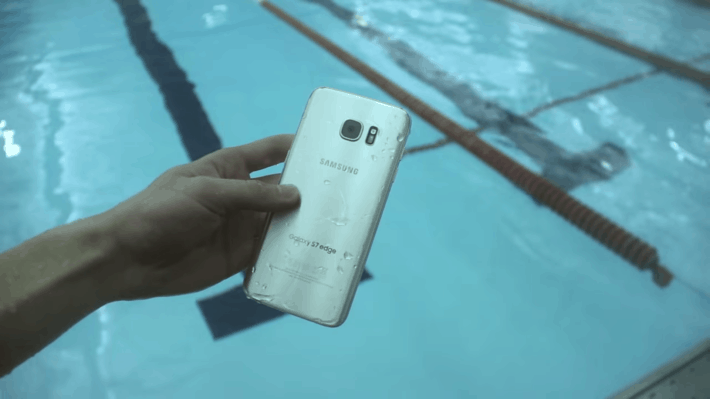 Samsung has unveiled two phones at the Mobile World Congress this year, same as last year. The Galaxy S7 and Galaxy S7 Edge were announced in Barcelona by Samsung, and some carriers have already started shipping pre-ordered units of these two devices. That being said, the Galaxy S7 and S7 Edge resemble their predecessors quite a bit, but unlike the Galaxy S6 and S6 Edge, Samsung's new smartphones are actually water and dust resistant thanks to the IP68 certification.

We've already shared a ton of Galaxy S7 and S7 Edge content with you, including the Galaxy S7 Edge vs iPhone 6S waterproof test. Well, we do have yet another test which proves that the Galaxy S7 Edge handles water without a problem. Now, before we begin, keep in mind that this applies to both the Galaxy S7 and S7 Edge, they both have the same certification, and are built from the same materials, but the phone used in this test is the Galaxy S7 Edge specifically. If you take a look at the embedded video down below, you'll get to see a YouTube user 'Harris Craycraft' test out the Galaxy S7 Edge. He has not only put the phone in a bowl and leave it there for 21 minutes, but he also dunked it in a pool. Mr. Craycraft even recorded a video while the device was in the pool, and you can check out the footage in the aforementioned video which is embedded below this article.

The handset did its job admirably in this test, as it did in some previous ones, which proves that Samsung did a good job in this regard. Aside from IP68 rating, the Galaxy S7 and S7 Edge sport QHD Super AMOLED displays (5.1 and 5.5-inch ones, respectively), and ship with 4GB of RAM. The two devices are fueled either by the Snapdragon 820 or Exynos 8890 SoC (region dependent), and sport 12-megapixel 'Dual-Pixel' snapper on the back. Android 6.0 Marshmallow comes pre-installed on these phones, and Samsung's TouchWiz is included on top of Google's operating system, as usual. The Galaxy S7 and S7 Edge will officially going to be released on March 11th, when consumers will be able to purchase these two devices.