Not so long ago, Samsung showed the world the results of its ability to think out of the box when the South Korean company introduced the Galaxy Note Edge, a phablet with an odd-looking curved screen – but only on the right side. The device was a test, and Samsung went really serious about curved screens with the release of the Galaxy S6 Edge and Galaxy S6 Edge+, one year ago. The formula worked well and this year the company came up with the Galaxy S7 Edge, with the same physical feature. However, despite its gorgeous appearance, the curved parts of the screen are yet to show their real usefulness to the point where they can change how users interact with their phones. For the Galaxy S7 Edge, Samsung added several improvements to the Edge UX, the software part of the screen, but still, most of them are Samsung’s own interactions.

One way for bringing in more features is by opening the platform for third-party developers, and it is exactly what the company did. So, if you happen to have a brand new Galaxy S7 Edge, you’d be happy to know that you can now install one of the first third-party Edge Panel apps out there. Called EHZ file explorer, the app is pretty simple and lists folders and files on your device, just like any other file explorer, so you can have a quicker access to files of your need. The app will show your files and there are a few settings to tweak its appearance and behavior: it is possible to set a background color for the panel, or leave it transparent, and you can choose a specific folder to show when the panel is activated, or continue where you left off.

In order to get the app, which costs around $1.50, you have to go to Settings > Edge screen > Edge panels > Download and search for EHZ in the Samsung Apps section for edge displays. Despite the app not making that big of a difference, it is nice to see developers jumping onboard. Samsung also brought in several panels, such as sports scores, news tickers, calendar, apps shortcuts, and even a compass. 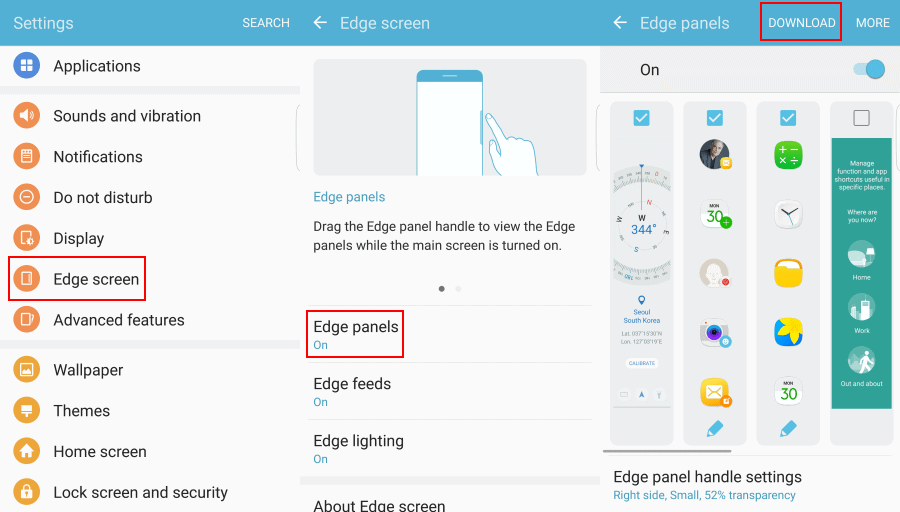