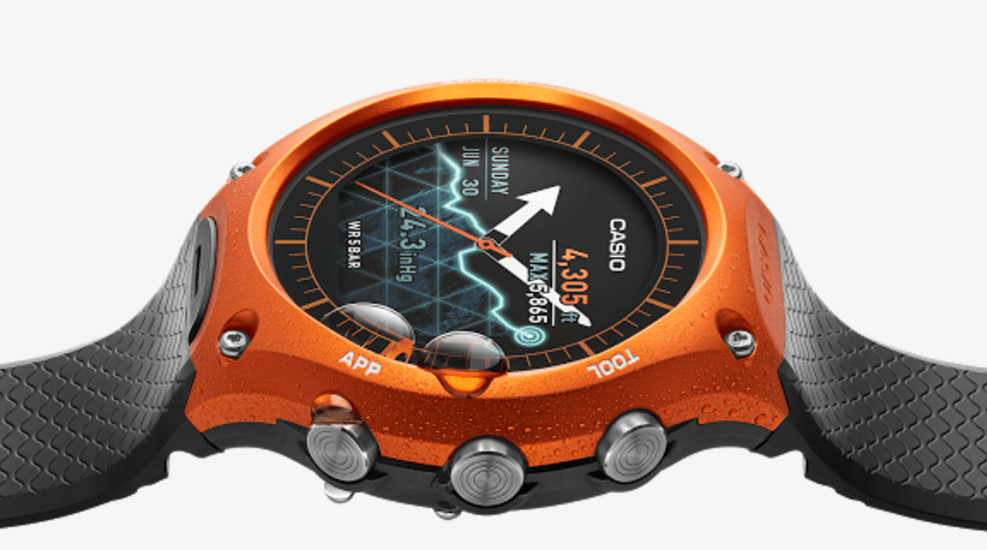 Back at CES 2016, held "way back" in January, Casio discretely announced their first Android Wear powered smartwatch. Simply dubbed the "Smart Outdoor Watch" the WSD-F10 is a rugged, outdoor-focused smartwatch that runs Android Wear, while also featuring some of its own party tricks, too. Running the latest version of Android Wear, the Casio Smart Outdoor Watch comes with all the same sort of features you'd find in a Moto 360, but it's built out of stronger stuff than most Android Wear devices. Casio is very much marketing this to the sort of wearer that isn't afraid to get their hands dirty or spend time outdoors.

Images from the Google Store show a watch that looks fairly chunky, but then again the new Casio is certified MIL-STD-810G and can withstand 50-meters below the surface. That MIL-STD-810G makes the WSD-F10 one of the most resilient Android Wear watches that's available, and should shrug off knocks, scrapes and drops pretty easily. For $499 however, you'd expect it to be pretty hardwearing. There's a flat tire circular display front and center here, which might disappoint some people, but it can also double-up as a regular watch. As in the sort watch that has a humble monochrome display that just tells the time and date, but lasts for a respectable month or so on a single charge. Software wise, Casio is bundling this with Runkeeper, ViewRanger and MyRadar however, there's no included GPS here, which might make some apps a little more reliant on that smartphone than many would have hoped for.

The WSD-F10 is very much a watch for those looking for something on the large side that can stand up to some serious punishment. The proprietary watch strap and large, large face make it clear that Casio is selling as much as a tool as it is a watch. An everyday Moto 360 to match your 9-to-5, this isn't. Regardless, Casio is a new addition to the Android Wear family, and the freedom that Google gives their partners to design such hardware as this just goes to show that Android Wear really does have great potential. Those interested can take a look at some more images below, and hit up the source link to purchase one of themselves.