The Internet has definitely changed our lives in terms of the sort of information that we can get access to, as well as how we communicate with each other. It’s also become a soapbox platform for the humble GIF. A fun way of communicating your earth-shattering displeasure at something, a way of letting everyone known it’s Friday and you’re ready to party damn it! A GIF can be a lot of things, and whether or not you’re a serial sender of them – as our own John Anon is – or someone who just lives to consumer all the GIFs they can eat, this new Top 10 list should have something for you. 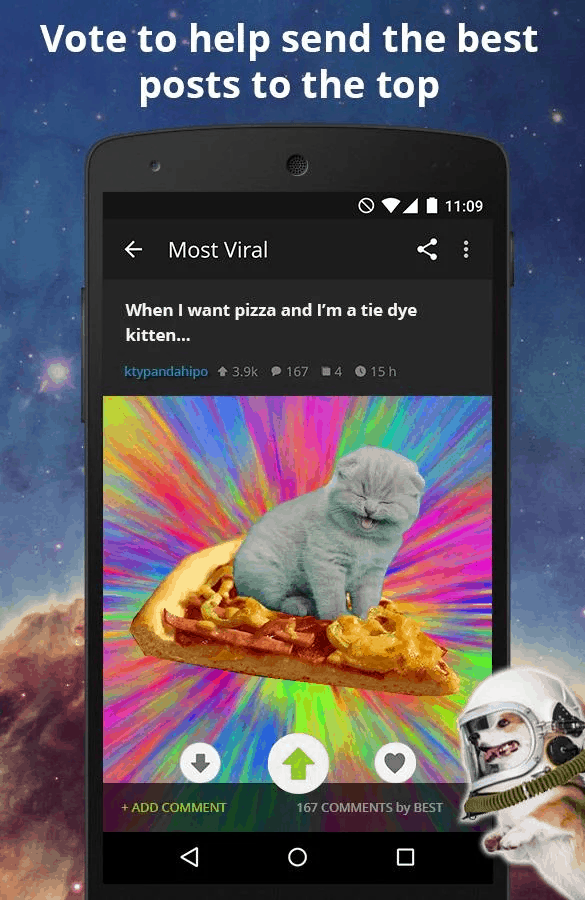 Imgur is definitely one of those apps that will help those insatiable GIF fans get their fix. Perfect for both uploading a GIF from your device and sharing with a simple link as well as finding new GIFs to quickly send to people. While the Imgur community mostly focuses around images and is often used for Reddit links, its GIF game is strong, and there’s a fairly nice community to found in the comment section below your GIFs and images. 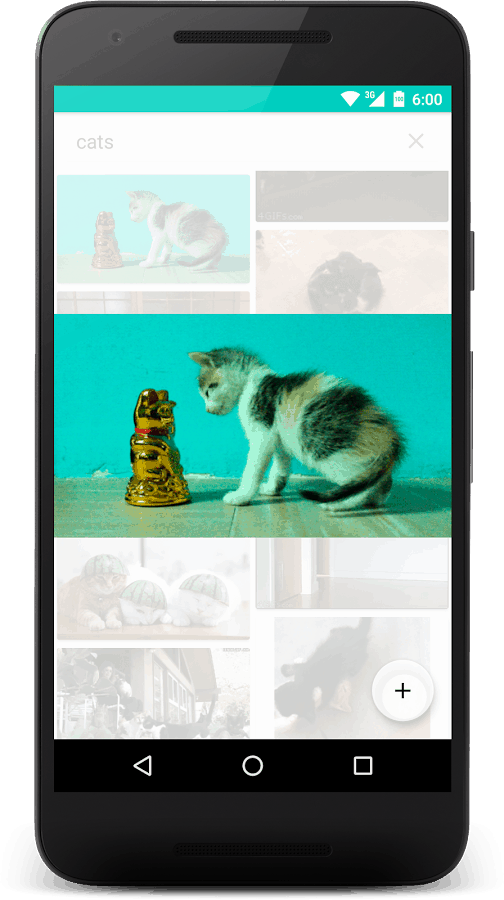 GIF Pager is an independent app that works with Giphy to allow fans of the humble GIF to search, explore and download all the wonderful animations that Giphy has to offer. The app uses Giphy’s public API to enable users to download and save their favorite GIFs. From there, users can do whatever they want with their GIFs, the app even allows users to download them in a video format, too. 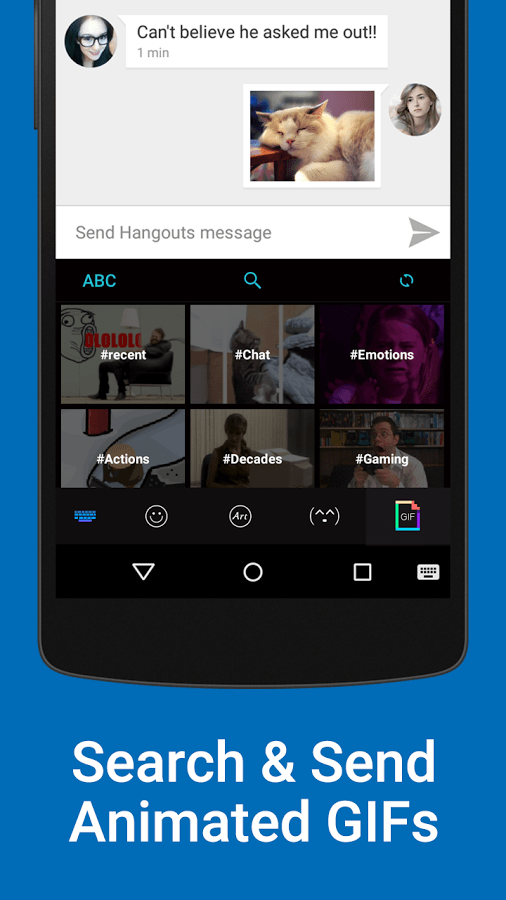 Being able to send GIFs to people using Android has always been pretty easy, as it is with pretty much any other sort of file type, but Kika Emoji Keyboard takes things to a whole new level. With Kika users get access to not only a whole host of different Emojis and such, but the ability to search for and send a GIF from Giphy right there and then from the keyboard. This means that users can load up and send off a GIF inside of whatever app they like – so long as it supports them, of course – without ever changing the keyboard that they’re using or zipping back and forth with other apps. 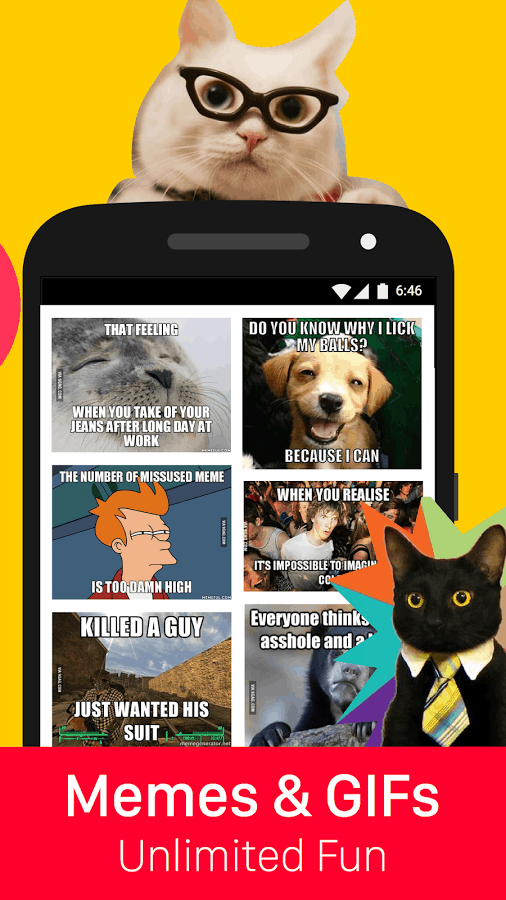 Much like Imgur, 9GAG is one of the best apps out there to consumer random funny stuff and of course, a whole lot of GIFs. 9GAG has become a staple in a number of people’s lives online, and it’s easy to see why, as 9GAG can be a quick way to brighten up a dark day, spread the funny with friends and more. GIF wise, 9GAG is full of fail clips, meme GIFs and a whole lot more, but there’s definitely some of the less broad, and weirder stuff that makes the Internet so great to be found here. 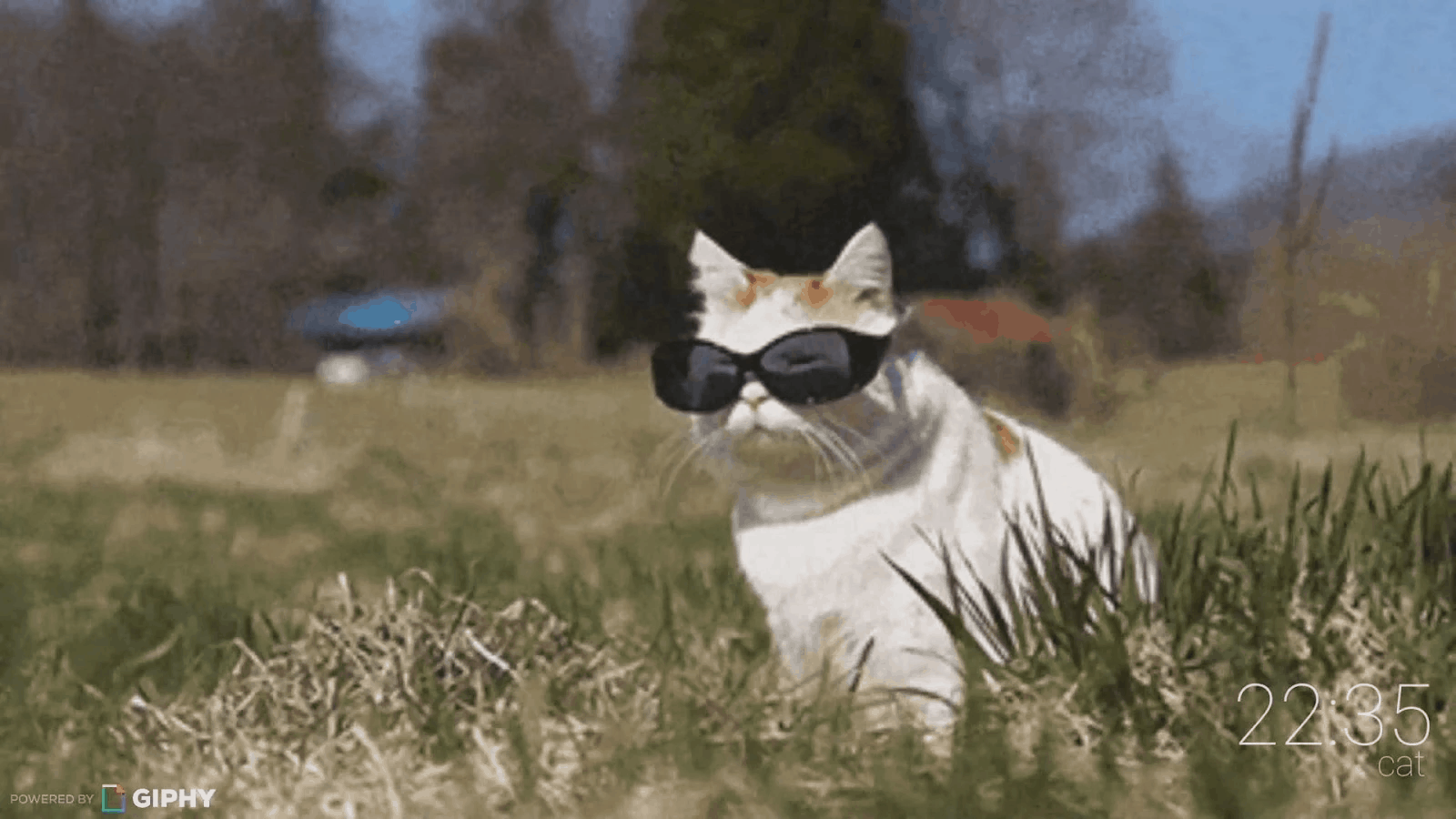 GiffyDream is a GIF app with a difference. It’s not designed as a simple browser of GIFs or way to share them with friends, but it’s a Daydream type app. Essentially a screensaver for your Android device, GiffyDream uses tags and GIFs supplied from giphy to display some cute, funny and otherwise entertaining GIFs on your device, be that a smartphone or a tablet. It’s recently been updated, and is just a simple app to get a little GIF fun on to your devices. 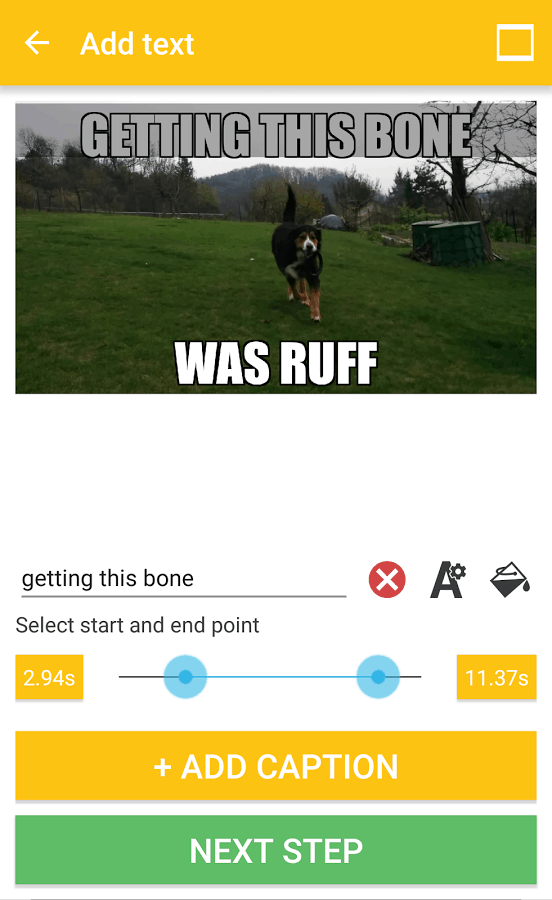 This is an app that, rather than just present you with other people’s work, allows you to create your own. The app allows you to import a GIF or image and then add the quintessential meme font with a message of your own choice. Users can change the length of the animation and choose the perfect moment their video for a GIF. The app is free to download, but it does appear as though it has a 15-second limit on the length of GIFs, which might be too short for some people out there. 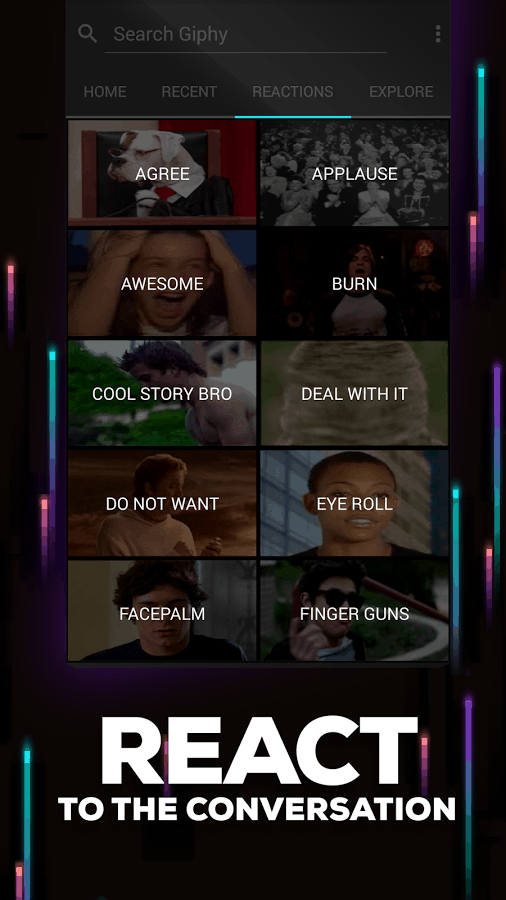 The official Giphy app for Android appears to be something of a mixed bag. It seems as though the developers were banking big on the support for GIFs which recently appeared in Facebook’s Messenger chat service. Which is nice, as there’s definitely a lot of people out there that are using the service, but limiting it to just that one service from Facebook is annoying. Still, the features here are all pretty comprehensive, and they allow users to quickly react with an appropriate GIF or search through the Giphy library to find something else funny and entertaining. 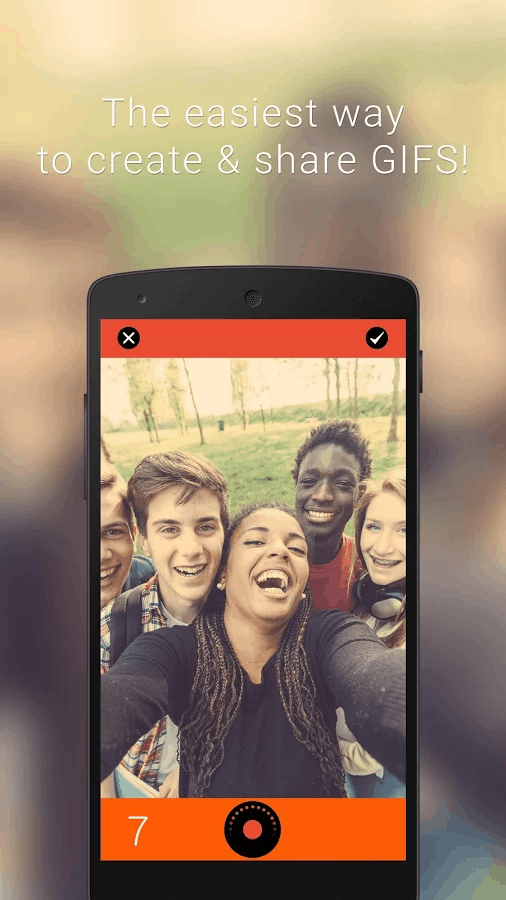 This is an app from the XnView developer, which has a number of other photo editing apps and the like under its belt. Using the app is super-simple, it captures a small moment with the camera on your device, and then converts that into a GIF. That’s all there is to it, really. This is definitely one of the easier apps to use when it comes to creating a GIF there and then, but it would be nice to see the ability to create GIFs from an already-taken video stored on your device. 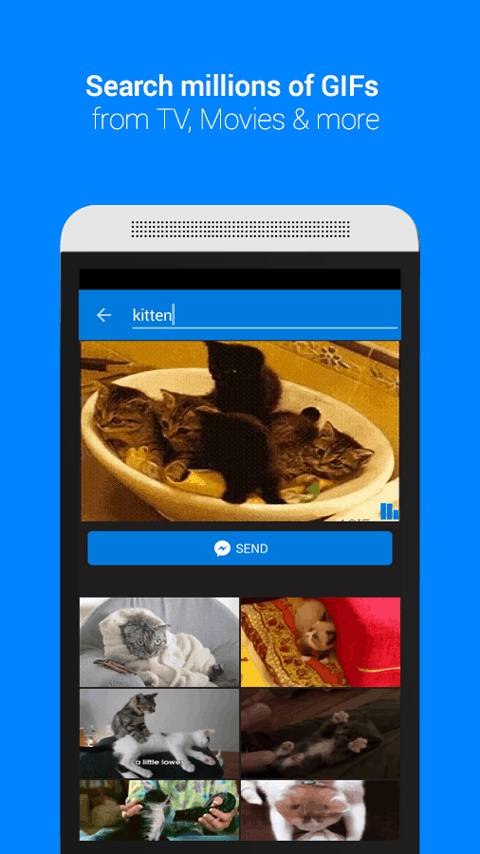 GIF Keyboard is another app that makes it nice and simple to send GIFS inside of Facebook Messenger. It seems to be a little more straightforward than the official Giphy app, but it does at least get the job done. It’s a shame that this is another app that only seems to support Facebook Messenger, but we suppose that Facebook users all over the world now have more than just the one option to cater to their Messenger GIF needs. 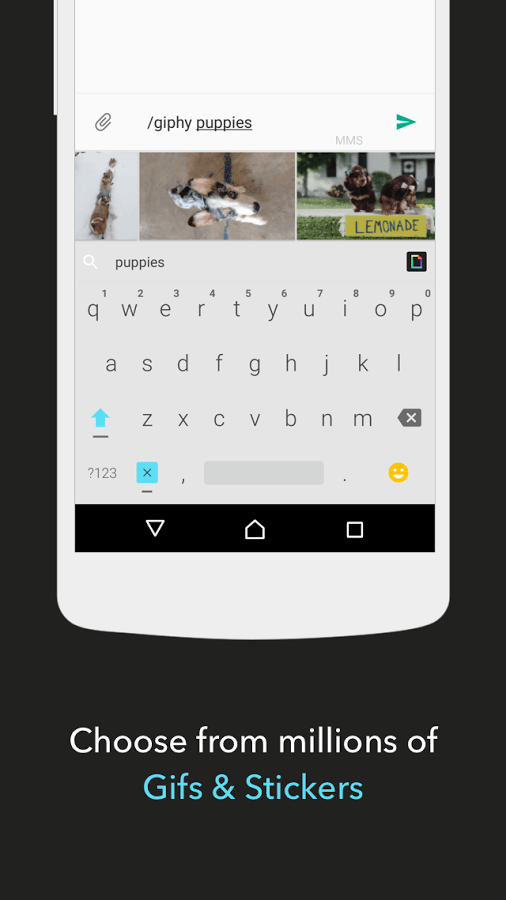 We know that list has featured its share of keyboard apps, but really, the best thing about GIFs is sharing them. Slash Keyboard makes that a real breeze. All you need to do is type “/giphy aintgottimefothat” and an appropriate GIF will be selected for you to send to your friends and family in whichever app of your choice. It’s also a pretty damn good all-around keyboard, too. This is one of the few apps that seems to strike a good balance of being a GIFtastic keyboard and being a good keyboard, period.