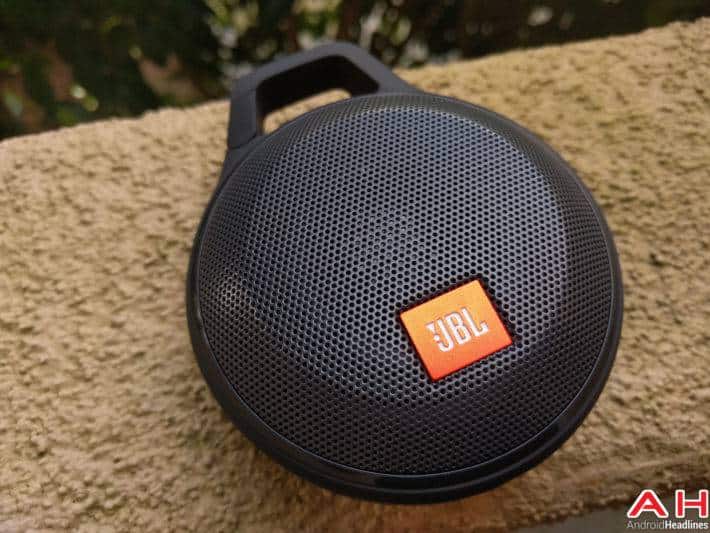 When it comes to Bluetooth speakers, a lot of the struggle for manufacturers is ensuring that while the price is right, the Bluetooth speaker is one which is portable and also powerful. This is the same battle endured by JBL with their Xtreme model offering a great deal of power but not being the most portable speaker available, unlike the Pulse range which are far more portable than they are powerful. Well, one JBL speaker which offers a surprisingly big punch from a very compact size is the JBL Clip+. This is a speaker which comes priced at the $49.95 marker.

In terms of the specs, this is a speaker which comes packing 3.2-watts, offers a frequency response of 160 Hz through to 20 kHz and a signal to noise ration of >80 dB. This is a Bluetooth-enabled speaker and one which comes equipped with a battery that is rated to offer up to 5 hours of playback between charges. In terms of its physical properties, the JBL Clip+ measures 4.2-inches in height, 3.4-inches in width, 1.6-inches in depth and weighs 150 grams. 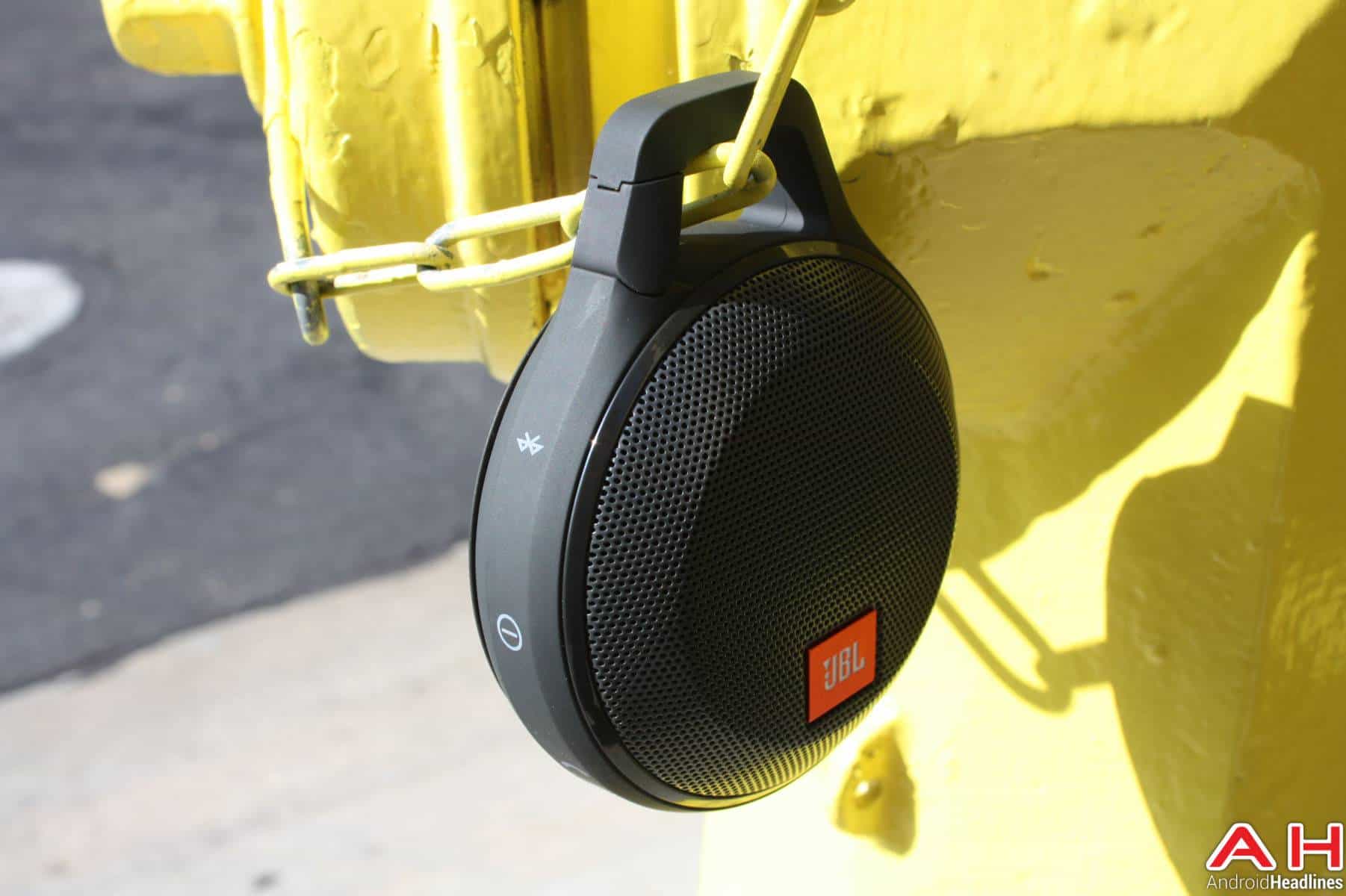 By any standards, the JBL Clip+ is a small speaker. This is one which is small by design and that is reflected in its appearance. As well as being small for a speaker, the design of the Clip+ is one which looks to be even more compact than its already small size. As a result the frame concaves on both the front and back of the speaker, resulting in a very curved and easy to hold design. In fact, this is a speaker which will easily enough fit in the palm of your hand. With such a compact design, this does mean that there is not a lot going on with the Clip+ and the rounded frame being where you find most of the functionality. On one side of the frame is the Bluetooth sync button, the power button and the call answer/hang up button. While the other side houses the volume up and down controls, along with a 3.5 mm headphone port. It is worth pointing out that these are not buttons which extrude and instead are under the surface buttons, so you do have to push reasonably hard to activate them.

Moving to the front of the Clip+ and the speaker adopts a generally minimal appearance. The outer grill domes outwards and actually very much gives off what could be thought of as a traditional speaker look. In typical fashion the meshed grill comes sporting the JBL logo and branding, while only a small power LED can be seen underneath the grill. 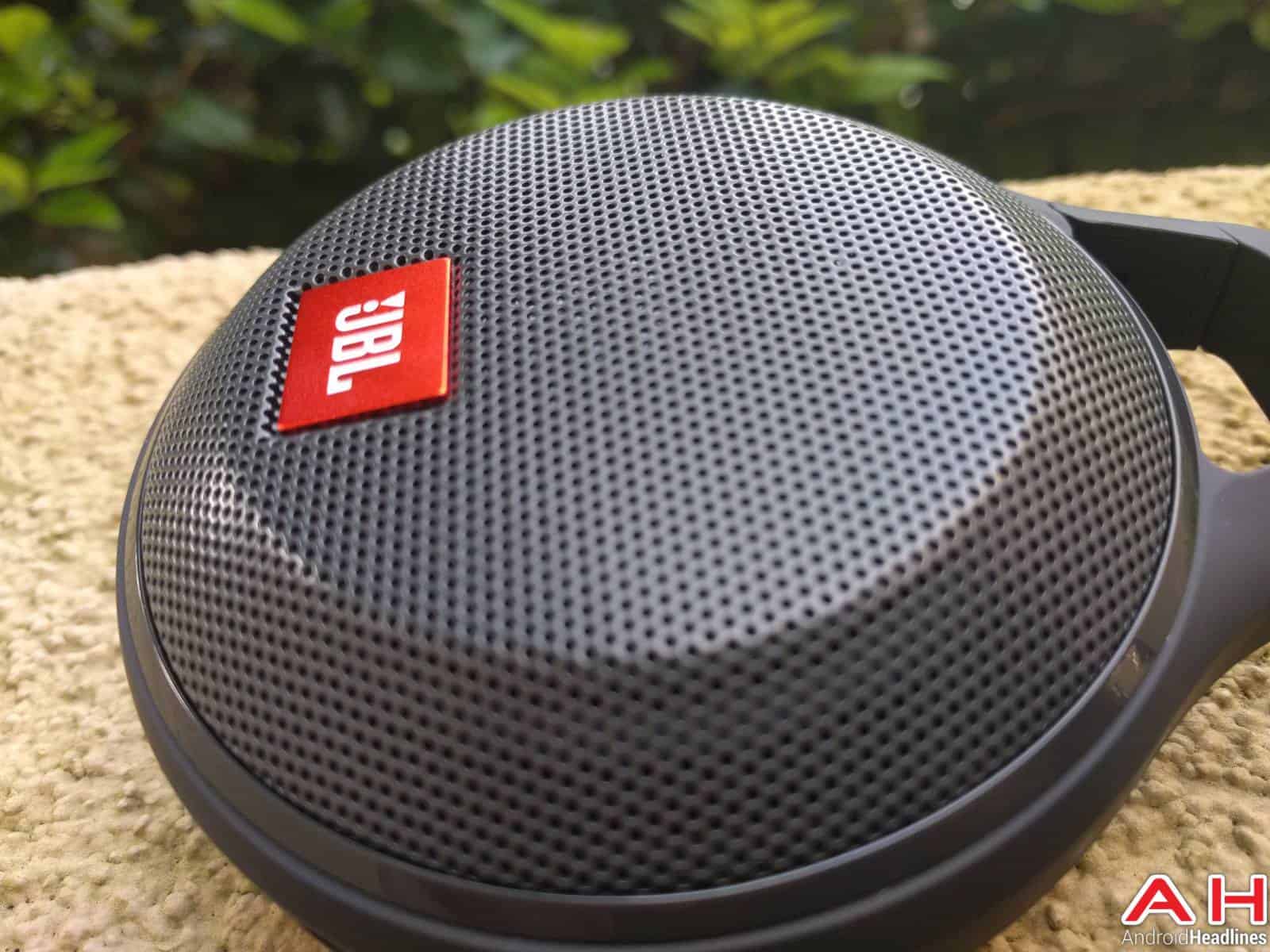 Moving to the back and this is where the first of its unique features starts to come to light. The JBL Clip+ is a speaker which comes with its own 3.5 mm input cable attached. What is even more interesting is how cleverly the cable has been embedded into the back. This is a very short cable and measures no more than a foot in total length. However the cable comes embedded in the back of the speaker within its own recessed cutout. The cable winds around the back frame (again in its own cutout groove) and the whole setup means the cable goes largely unnoticed until you actually need it.

Moving to the top and bottom and the bottom remains largely basic with only a microUSB charge port on offer. While the top is where the next obvious feature comes into play. Much like the previous model, the JBL Clip, the + version comes with its own hook which makes use of a carabiner clip that can be pushed inwards to open and allows for easy connecting to a bag, jacket or otherwise.

Overall, there is not a lot of design differences between the Clip+ and the original Clip. This is largely the same design with the exception of some very small differences like a slight change of the branding plaque. That said, one of the less visually differences is that the Clip+ is a speaker which comes with splash-proof casing. So while you can get it wet and not have to worry, you are not advised to get it submerged. 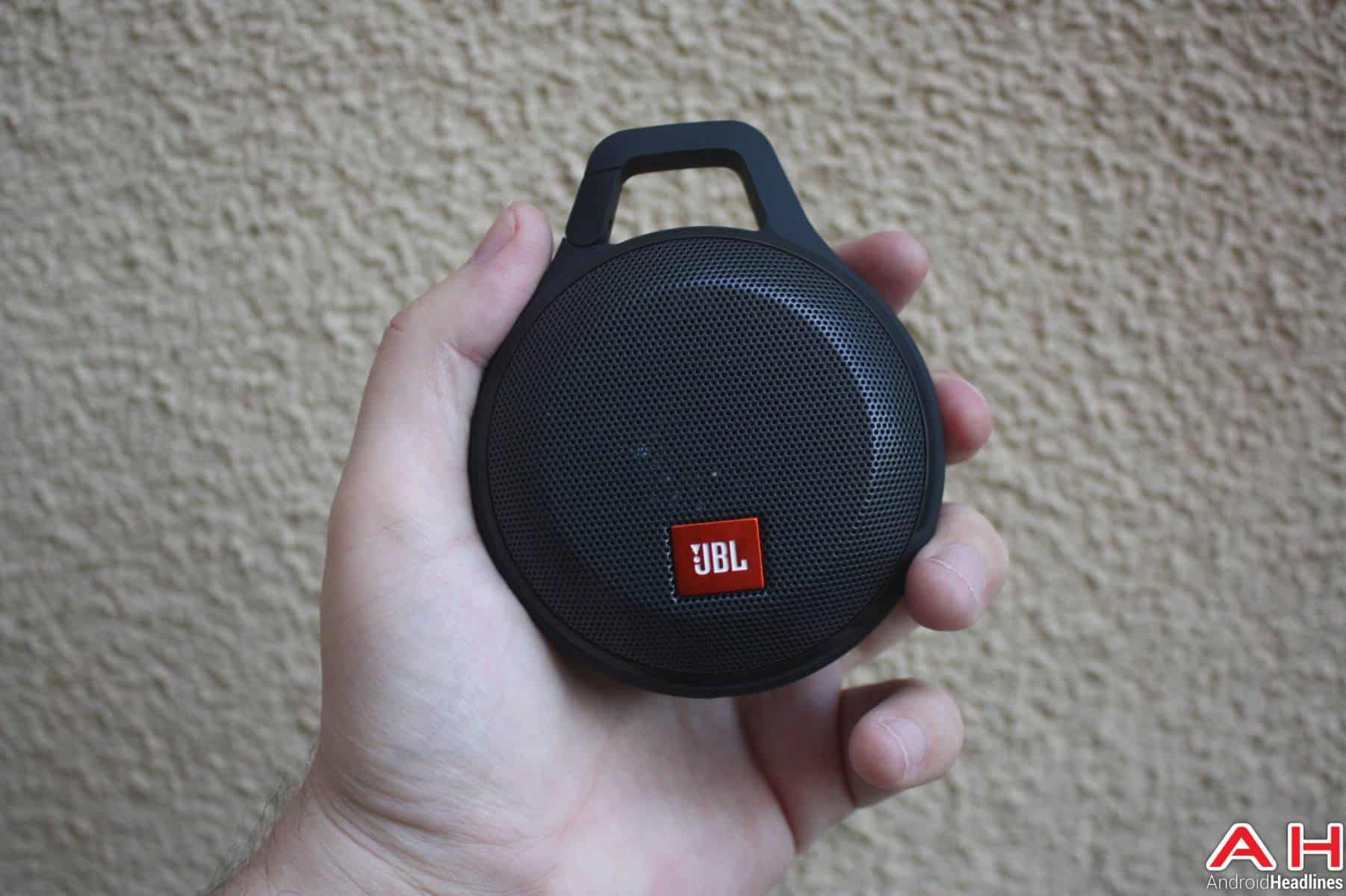 There is little arguing with the sound quality on offer with the Clip+. First and foremost, this is a very tiny speaker, not to mention this is also a very affordable speaker. Normally two aspects which often result in a comprising of the sound. However, when it comes to the Clip+ this speaker is able to deliver a very good sound and even at higher volumes. In fact, it is rather surprising as to how loud the sound output can reach from such a small speaker.

Of course, there are issues and there is always likely to be issues with a speaker this small. So you can expect that the louder you get, the less the Clip+ is able to effectively deliver and especially with the bottom end. But in fairness to the Clip+ these are likely to be issues that you are expecting before purchasing a speaker of this size. Its bass response is just not going to be as good as you will find on other larger JBL speakers. In fact, distortion does happen rather frequently with bigger bass-oriented tracks and especially at higher volumes. There is also a slight issue when the speaker is lying on a flat surface. Due to its lightweight nature, this is a speaker which when laying flat does fall victim to its own vibrations. Although, this is an issue which is easily remedied by elevating in any way or hanging from somewhere.

Criticisms aside, you are likely to be surprised as to how good the bass response is with the Clip+. While small, it is a speaker which is able to offer a decent bass playback at lower volumes. More impressively though, is the level of range that the Clip+ manages to output. While tops and bass are compressed a little, the mids come through extremely well on this little speaker and overall, the sound quality is certainly one to rival any speaker at the $49.95 price marker. Throw in the JBL name and the general compact nature of the Clip+ and it is unlikely anyone would be too critical of the level or quality of the sound on offer. 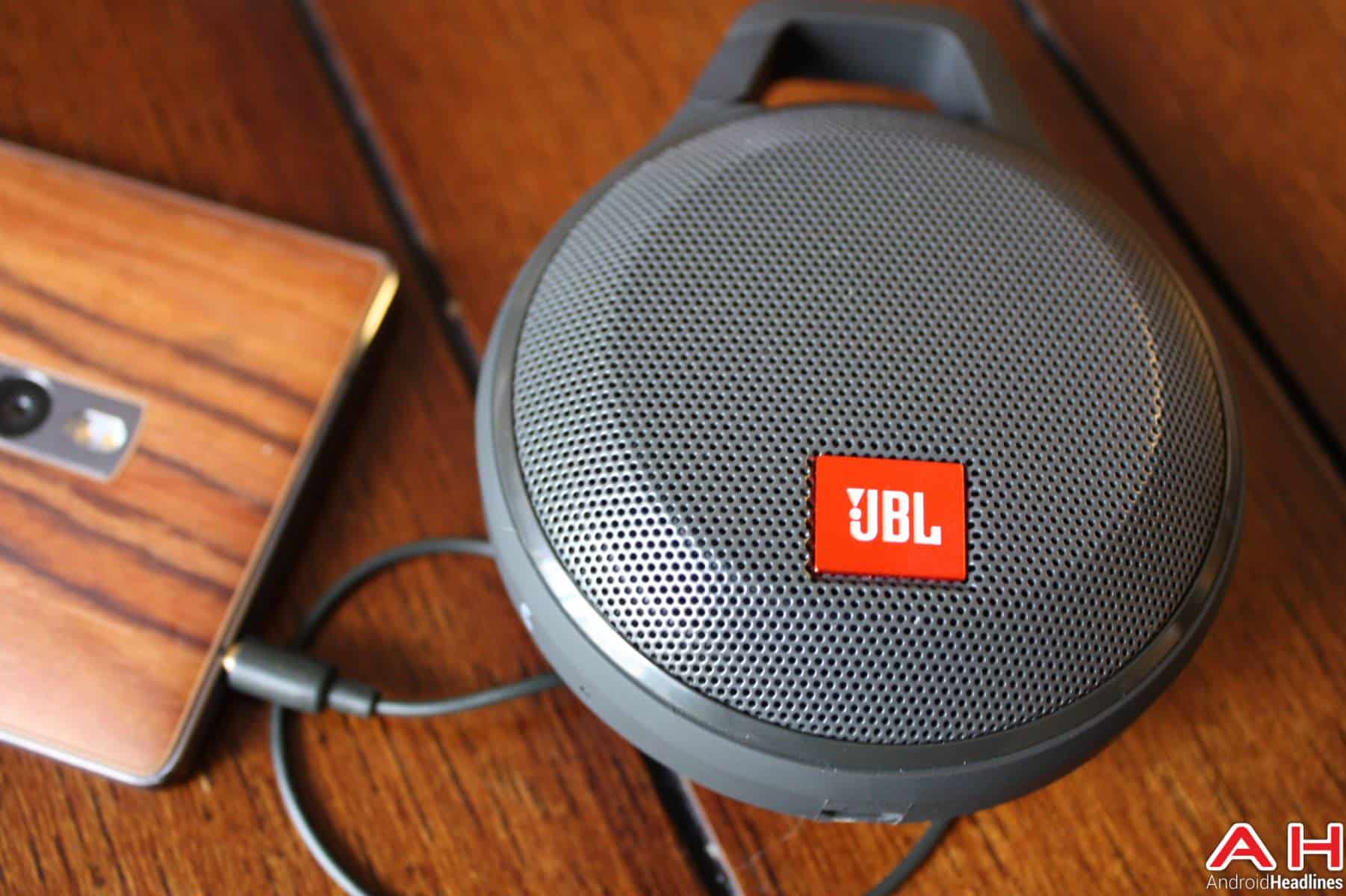 As this is a tiny speaker and a good quality one which can output a fairly decent volume level, it should be expected that the battery on offer is not going to be the best. It's not and especially compared to the general market where Bluetooth speakers are able to offer very good levels of battery life nowadays. In terms of specifics, JBL claim that this is a speaker which can offer up to five hours of usage. However, during testing that does seem to be the very utmost you can expect. What was far more commonly encountered at the volume played was the four-hour marker. The clip never drained in less than three and a half hours and also never really passed the four-hour marker in any noticeable manner. Fours hours does seem to be the number you should expect.

On a positive though, there did not seem to be a difference between the Bluetooth use or the attached 3.5 mm cable use. When both were tested, they both seemed to offer relatively the same length of playback before the battery went flat. So regardless of whether you are playing from a connected device or streaming directly over Bluetooth, the battery does not seem to be any further affected.

In terms of connectivity, this was also a little problematic. Generally speaking, there were no major issues with connectivity and the Clip+ remained strongly connected overall. However, randomly at times it would just stop playing for some reason. While this initially was thought to be a Bluetooth issue, it did happen as well when connected directly via the 3.5 mm cable. And as you might expect it does occur increasingly often as the battery begins to deplete. To reiterate, this was not an overly common issue, but is one which did happen enough to be noticed. If you are playing in small bursts then you will unlikely notice any issues with the connectivity, however during longer sessions, you may have to hit the power button once or twice to restart playback. 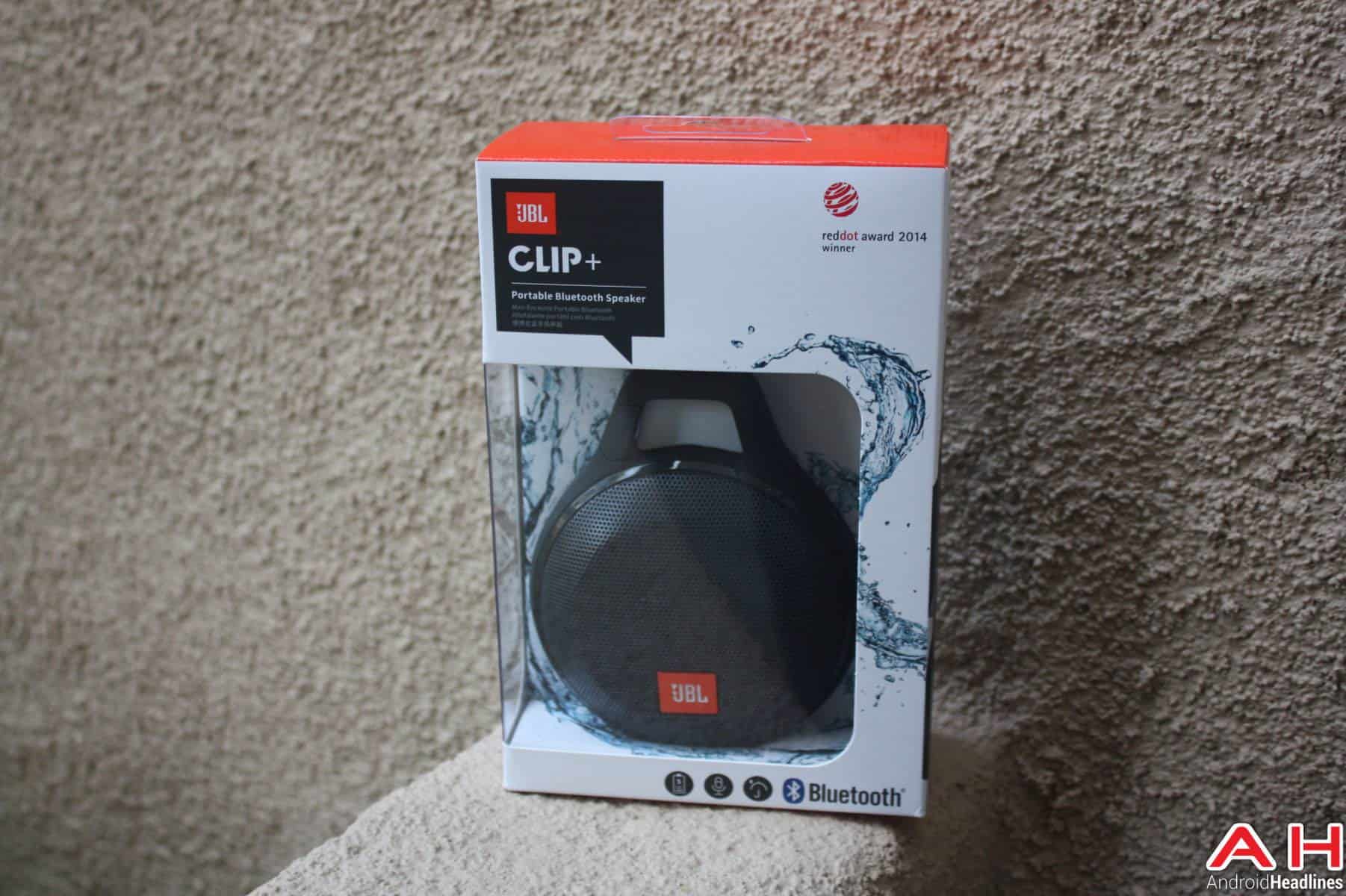 Overall, the JBL Clip+ is a Bluetooth speaker which does combine the best of both worlds. This does take compact to the next level with a speaker which is small enough to fit in your hand and light enough to really not be a burden to carry. In fact, there is a good chance that it is almost as light as your smartphone. However, as well as being light and ultra-portable, this is also a speaker which offers (for its size) a very good sound quality. There are issues as it does suffer on the lower end and a little with the tops, and does not seem to like staying connected for extremely long periods of time. But that all aside, when you factor in everything you are getting and all for under $50, it is hard to argue with the value on offer with the Clip+.

Should you buy the JBL Clip+?

If you are in the market for an ultra-portable speaker and one which is very well-priced, then you should definitely consider the JBL Clip+. While this is a speaker that is designed to be used when out and about, there are a number of prime places you will find for the Clip+ in the home. Due to its splash-proof nature, this would easily work as a bathroom or kitchen speaker. However, if you are the more adventurous type, then again, you are unlikely to find a better sounding and more portable speaker than the JBL Clip+. For those interested, although the JBL Clip+ comes with a $49.99 price tag, it does seem to be currently available in a selection of colors for only $39 through the link below.

Buy the JBL Clip+ Portable Bluetooth Speaker
Advertisement
Trusted By Millions
Independent, Expert Android News You Can Trust, Since 2010
Publishing More Android Than Anyone Else
25
Today
144
This Week
399
This Month
5143
This Year
106618
All Time
Advertisement