Android N was announced earlier today, much to everyone’s surprise and much earlier than the May launch that both Marshmallow and Lollipop enjoyed before it. The aim of the game with this latest Android release again appears to be refinement and the addition of a few new features. Much like Marshmallow focused on battery life and permissions, Android N appears to be focusing on controlling notifications and making better use of larger displays with the new multi-window feature. There are however, a number of other small – yet significant – changes coming to Android N as well.

One of those, as discovered by Android Police, is a “Data Saver” mode found in the now-familiar “Data Usage” settings menu. Chrome has a data saving feature of the same name included, and while that appears to compress data to lighten the load on not just your device, but also your cellular bill, this system-wide feature doesn’t seem so zealous. Instead, this Data Saver feature is more about limiting what apps running in the background can do with your connection. As we can see below, the feature essentially cuts off access to your cellular connection for background running apps. The original Data Usage menu was introduced to make it quick and easy to let users know when they were reaching a user-defined amount of data, making it simply to manage a 2GB or 4GB data allowance, for instance.

This new feature however, appears to tackle apps that are running in the background and also using your cellular data. These would be apps such as Facebook downloading and caching images for status updates or perhaps your pesky email app. This is a simple toggle sort of feature, and will be easy to turn on or off when roaming overseas or just to save a little bit of battery life, too. More features like these can’t hurt, and users with scant data allowances will surely appreciate such a feature. While not as big a feature as multi-window support, it’s small additions like these that help complete a major update and offer users more opportunities to tailor their overall experience to how they like it. 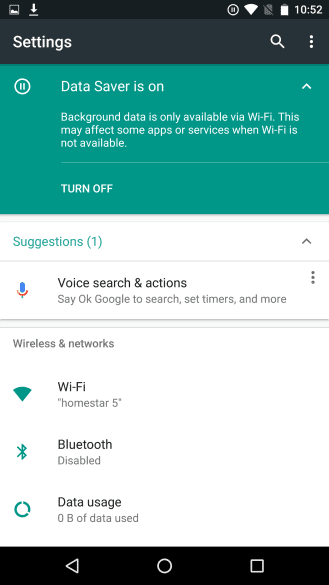