It’s no surprise that mobile gaming has become huge over the past several years, and while gaming in general is a large industry with a lot of money to be made, mobile gaming specifically has grown quite a bit larger than many likely thought it would, and is now currently the largest digital platform for games, with a reported $34.8 Billion in annual revenue in 2015 alone according to a report by App Annie and provided to Venture Beat. This annual revenue is expected to grow into a total of $41.5 Billion by the end of this year, and $74.6 Billion by 2020. While this is global revenue spread across all mobile gaming platforms, it displays just how much money there is to be made. The questions is, what is Google doing for mobile game developers to help them obtain a piece of that pie and are they doing enough to focus in on mobile gaming for Android?

Android has become a fairly large mobile platform for games, and although a lot of the revenue is made by larger companies, Google is doing its part to help promote smaller companies (indie developers) in the Play Store with the newly announced Indie Corner, a category that will cycle through a human-curated list of indie games. This is a big step to help level the playing field a bit for indie developers and it affords them a better opportunity to be seen by gamers, especially since the list will be changing. 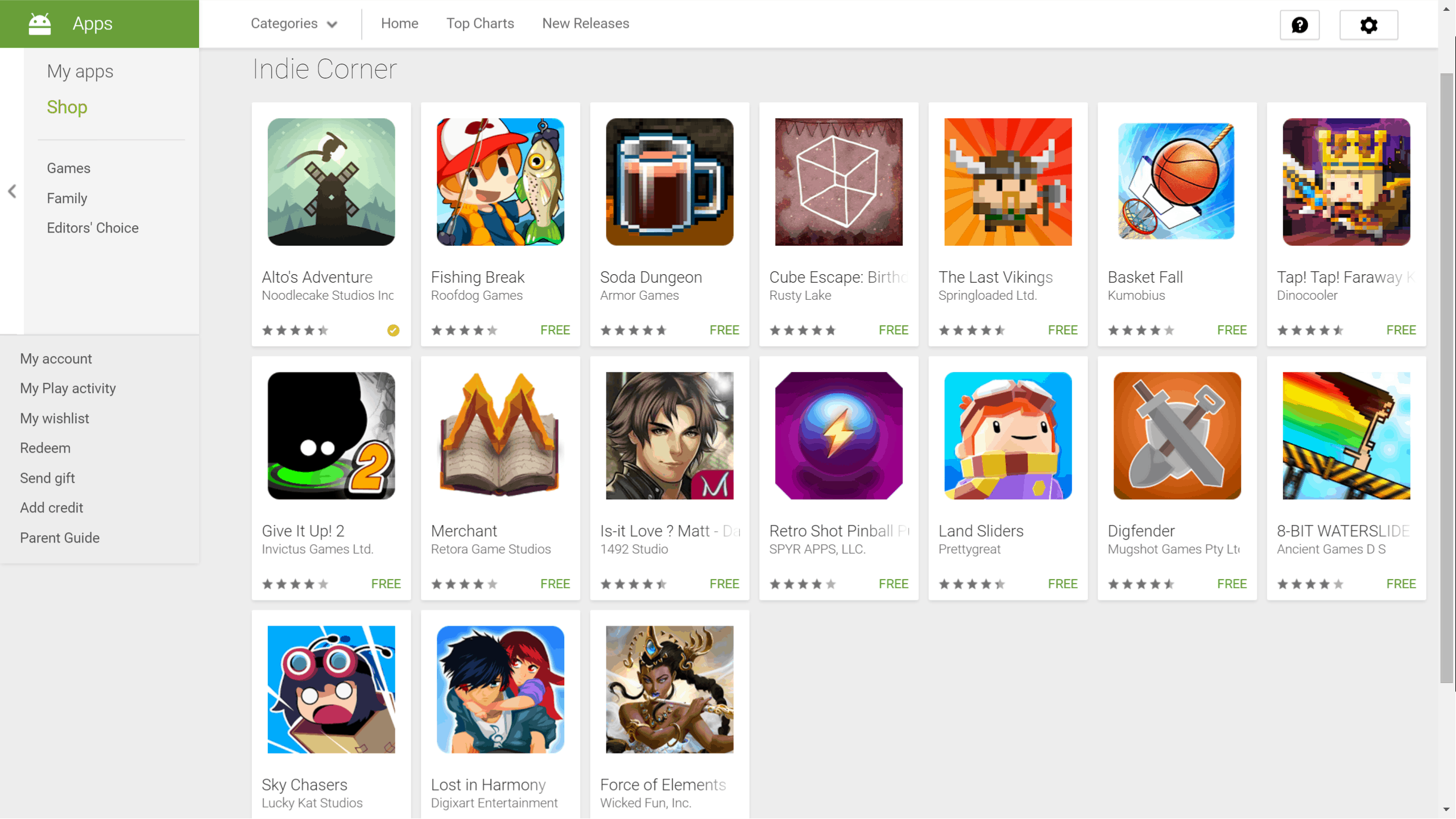 Aside from introducing a new corner of the Play Store for smaller indie developers, Google is making it potentially easier for gamers to experience the games they love, or may be interested in, by allowing the capability to demo Android games from Google search results. This new ability was announced yesterday as a feature set to roll out in the next few weeks for game developers, which would be able to set up trial runs of the game that mobile device users could access from Google search results and experience a small demo portion of the game, followed by a nudge to install if they so choose. This small update to Google Play Games should help expand the possibilities for game developers on Android as it’s one more tool they can utilize to reach more users.

These new changes to Google Play Games will certainly help mobile game developers on the Android platform, but they aren’t the only tools Google has provided. Over the past several months and throughout last year, Google introduced a handful of new changes to Play Games which assist developers in making the most out of their creations which are also aimed at providing a more enriched experience for gamers themselves. Last October, Google introduced the ability to record game content and upload it to YouTube, all gamers had to do was enter the Google Play Games app and hit the record button on their favorite games. As part of Google’s announcement on Monday, they introduced the Video Recording API which allows developers the ability to add video recording and video livestreaming capabilities directly into their games, making things that much easier for those that play them to engage viewers and share their gameplay with others. These enhancement tools make gaming on Android more interactive and potentially more fun for those that either enjoy playing or viewing others play.

Back at the end of January, Google introduced a suite of player analytics tools for mobile game developers that would allow them to gain a better understanding of the players who access their games, and understand the player behavior which might help developers engage gamers before they decide to quit playing. While new users are always a benefit, retaining existing users is always a more important factor as gaining new users will generally mean nothing if existing users continue to leave. With analytics tools available that could help developers understand why gamers may be churning, developers have a way to make their games more enjoyable for gamers or find a way to incentivize continued play.

While most of what Google does for games on Android revolves around helping the developers, Google does initiate changes that make gaming on the platform better for gamers too. The Google Play Games app itself is a good example of this. Although this is not a new introduction, it’s a wonderful example of how Google wants to make gaming on Android more fun for the gamer, by giving them a hub to oversee all of their installed games, alongside options to view other players’ game lists, as well as personal achievements and the achievements of friends. The app also features a category for displaying online game matches requests, gifts and rewards, and Quests players have accepted, and for those that strive to level up in just about any game they play, Google Play Games also allows mobile gamers to gain experience from completing in-game achievements which all contribute towards a level boost with a new title. These aren’t sweeping changes that have made gaming on Android so robust it’s impossible to turn away from, but they have made things more engaging and fun for a large portion of mobile device users, from those who enjoy playing the occasional casual game to hardcore gamers who like to dive deep into a handful of different titles until they complete them. 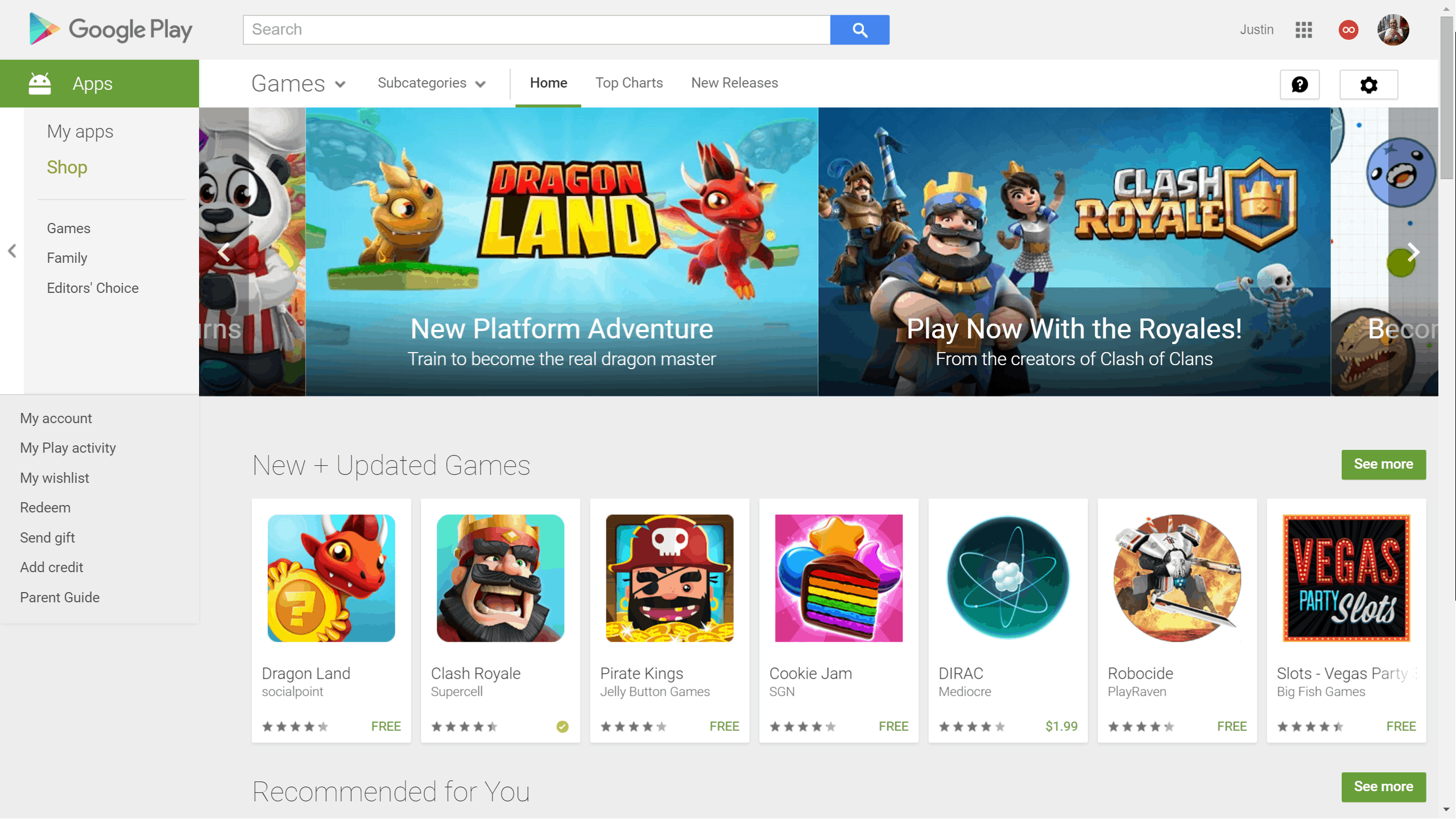 Gaming on Android has come a long way, surely, but there is still plenty of room to grow and ways Google could do more to make the gaming landscape on the platform more enjoyable. For example, they could still improve the way games are listed in the Play Store. While this particular area of mobile gaming on Android has gotten quite a bit better, it still feels like there are things that could use an improvement. Finding and searching for games is much better than it used to be, but it could still be better. There is no way to browse through games alphabetically on the Play Store, and while it would surely be a huge undertaking to catalog every single game in the Play Store from A-Z and this may never actually be something which Android users are able to do, it could allow gamers to find games more easily if they felt they might have missed something they could really enjoy simply because it wasn’t featured or displaying in a category. The reason that browsing in this manner is not already available could simply be due to the fact that this would potentially cause people to spend more time looking for games to play than actually playing them, and Google has been trying to make the Play Store simpler to navigate and more intuitive, but the ability to browse in such a way gives the gamer just a little more control over what they’re looking for.

While users can’t browse for games alphabetically, they can browse for games by publisher or developer if they happen to know the name of that particular company, and with the new flashy publisher pages Google introduced last year things look a whole lot better and games actually feel easier to browse through in regards to a specific developer. Of course, not all developers/publishers have pages that look like this and it tends to be just the big name companies who have the big header banners with images. Nevertheless, it’s simpler to see all games from a company like Square Enix for example as the page of their games and their games only will be denoted by the banner image, which is a whole lot easier than scrolling through a page of listed items having to read the text of every game listing just to make sure it’s by the publisher you’re wanting. Even though there are still improvements that could be made to the whole of gaming on Android, Google has been doing a pretty good job of making things better both for the developers and the gamers, and things are likely to continue going up as long as gaming continues to be big on the platform.