Motorola Moto G (2015) is the third-generation of the company’s entry-level Moto G line. This handset was introduced alongside the Moto X Play and Moto X Pure / Style back in August last year. The Moto G devices were always considered to be quite affordable, and yet quite capable at the same time, and the Moto G (2015) was not an exception to that rule, and our review of the device definitely proves that.

That being said, the Moto G (2015) has been available for purchase for a long time now in various markets, including India. This device has originally shipped with Android 5.1.1 Lollipop, and the Android 6.0 Marshmallow update has been out for a long time now, while the 6.0.1 Marshmallow version rolled out recently. Well, we have some good news for Moto G (2015) owners in India considering the fact that Motorola started seeding Android 6.0.1 Marshmallow to them as well. The changelog for the Moto G (2015) 6.0.1 Marshmallow update is pretty much identical to the one we’ve seen for the Moto X Play, aside for Unicode 8.0 emoji support. Motorola has opted to bring back the option to turn off the camera shutter sound, and now you can also double press the power button in order to launch straight into the camera. This update contains Android Security update for March 2016, while the company also included various stability fixes throughout the OS by squashing quite a few bugs. That is pretty much it as far as this update is concerned, there are not many new features, but there are a couple of camera-related ones as we’ve mentioned already. The update itself is 371.4MB in size, and will update your system to v24.61.55. The update is already rolling out to Moto G (2015) owners in India, but it is not available to everyone at once, so be patient. 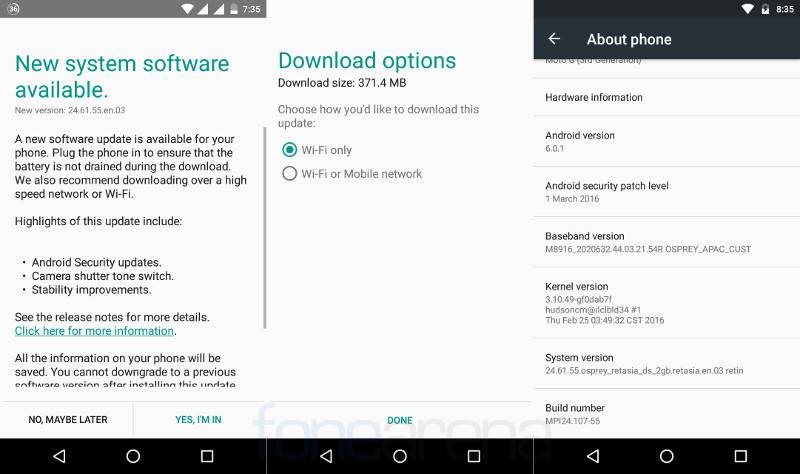