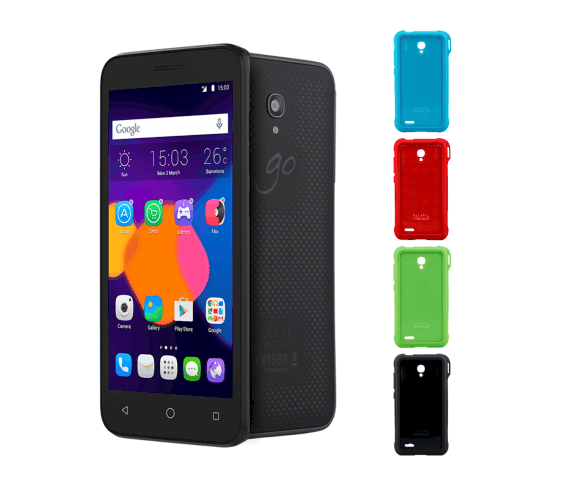 There were various announcements which came through during the recent MWC event held in Barcelona. Alcatel OneTouch was one of the companies present and they did make a number of new products announcements, including the launch of their twin Idol 4 smartphones. However, they also announced that they were changing the name of the company. More specifically, dropping the 'OneTouch' moniker and now operating solely as Alcatel. In spite of the event now being long over, Alcatel has today announced they have started selling a new Android smartphone, the Alcatel GO PLAY.

In terms of the specs, The Alcatel GO PLAY comes equipped with a 5-inch display which makes use of a 1280 x 720 resolution. Inside, the GO PLAY comes loaded with 2GB RAM and is powered by a Qualcomm Snapdragon 410 Quad-core processor (clocking at 1.5 GHz). Internal storage is set at 16GB as standard, although the GO PLAY does come equipped with a microSD card slot for expanding the storage when needed (up to 32GB). Cameras comes in the form of an 8-megapixel rear camera, which is coupled with a 5-megapixel front-facing camera. While additional features include a 2,500 mAh battery and water and dust resistant, thanks to an IP67 rating. Last but not least, this is a smartphone which comes running on Android 5.0 (Lollipop) out of the box.

However, the specs aside, there are two clear main selling points with this latest handset. The first is that it designed to be a more durable handset, so as well as its IP67 rating, this smartphone looks to offer a more durable build. Not to mention, Alcatel are selling a number of ruggedized cases specifically designed for the GO PLAY to offer a greater level of protection, cases which are available in a variety of different colors. The other notable selling point is that this is an affordable phone as Alcatel now have the GO PLAY up for sale for only $199.99 as an unlocked model. In addition, Alcatel are also currently throwing in a free ruggedized case for good measure. Along with free shipping for any purchases made during March. Those interested in finding out more about the Alcatel GO PLAY Or ordering one for $199.99, head through the source link below.