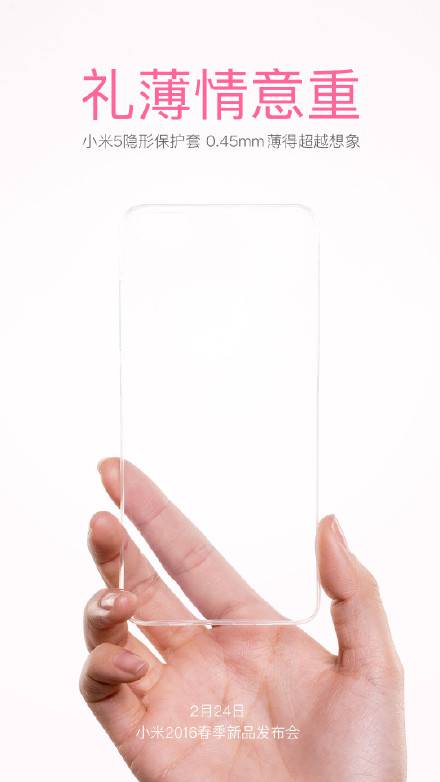 Samsung and LG aren't the only companies that will announce their new flagship during the upcoming Mobile World Congress (MWC) in Barcelona, Xiaomi will do the same. Xiaomi's long awaited Mi 5 flagship will finally going to get introduced at MWC, on February 24th, to be exact. The company has already confirmed that this phone will be fueled by the Snapdragon 820 SoC, and the company's officials also revealed that NFC and dual-SIM capability will also be a part of the package, not to mention the Mi 5 will sport a 1080p display, and not the QHD panel many people thought will ship as part of the Mi 5 package.

That being said, a new piece of info surfaced, Xiaomi has actually decided to reveal the Mi 5 case, which gives us a good idea of how big the smartphone will be. Many rumors and leaks actually said that the Mi 5 will sport a 5.2-inch panel, and judging by this case, that is very much possible. Keep in mind that a 5.7-inch device was also benchmarked recently, so either GFXBench was wrong, or we're in to see two different sizes of the Mi 5 (Mi 5 Plus perhaps?), we'll just have to wait and see what happens. Xiaomi has also revealed that this case will be 0.45mm thin, which is nice.

Now, someone has decided to tweak Xiaomi's image in order to reveal more detail. If you take a look at the other two images in the gallery down below, you'll get to see some additional details here. The phone's camera is located in the upper left corner (looking at the case from up front), and both power / lock and volume rocker buttons will be placed on the right-hand side of this phone. The USB Type-C port will be placed on the bottom of this phone, and will be flanked by two speakers. Now, as far as other specs go, we can only rely on previous rumors. According to that info, you can expect this phone to feature a 5.2-inch fullHD display, 3 / 4GB of RAM and various internals storage options. The phone will be fueled by the Snapdragon 820 SoC, and a 3,600mAh battery has also been mentioned. This device will feature two SIM card slots, and 4G LTE connectivity will also be a part of the package. The 16-megapixel main shooter has also been mentioned, and Android 6.0 Marshmallow will come pre-installed here, with Xiaomi's MIUI 7 OS on top of it. Keep in mind that two different MI 5 designs have also been mentioned, all metal and metal + glass variants.