It’s very clear that smartwatches have been gaining in popularity, every tech company seems to be building one or, at least, thinking about building one. Software specifically designed for these devices is also getting better and more useful, so people are starting to see additional benefits of smartwatches. According to a report from Strategy Analytics, this fact reflects in smartwatch sales from last year. The company states that in the fourth quarter of 2015, 8.1 million smartwatches were shipped which is quite a large number itself, but it was also mentioned that Swiss watch makers managed to ship 7.9 million watches, thus, being the first time that smartwatches outsell traditional Swiss watches.

On the other hand, sales of Swiss watches dropped a little bit, as in the fourth quarter of 2014, 8.3 million units were shipped and last year’s holiday quarter managed to ship 7.9 million units. This means that sales declined almost 5 percent compared to the previous year. Traditional watchmakers are either building smartwatches with a color touchscreen and its own operating system or they have been integrating connectivity features into some of their exclusive designs which still look like regular watches. Still, the report mentions that Swiss company TAG Heuer, which built a luxury smartwatch using the former strategy, only had a 1 percent of the total smartwatch shipments. According to a report from Strategy Analytics released in the summer, Apple’s smartwatch market share could be approximately 75 percent in the second quarter of 2015, and now that they have reported a decrease in market share one might wonder if Apple’s offering raised awareness for this kind of devices and now people are looking at smartwatches from other companies, especially now that watches running Android Wear are compatible with iOS devices. 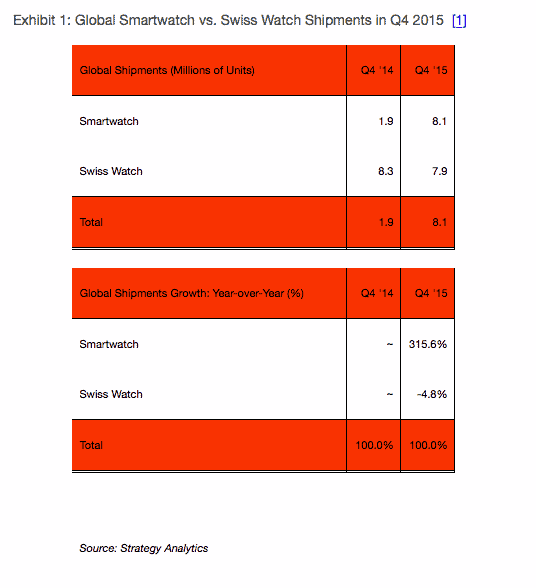