Samsung is the world's largest manufacturer of Android smartphones, offering a complete portfolio of different devices covering entry level, mid-range devices and two flagship grade lines, the headline-grabbing Galaxy S and Galaxy Note devices. Some of the devices have been a little difficult to place, such as the Galaxy A series: these typically offer a mid-range specification but with prices approaching the high end. Arguably, for many customers a current mid-range device is more powerful and proficient than a two and certainly a three year old flagship device, but some of the reason for this is because the manufacturer of the older device no longer sees fit to keep the software up to date. The Galaxy A series, then, offers a metal build quality with "good enough" internal hardware for many customers. The range is organized into size and capability order, with the A3 offering a smaller screen than the higher numbered models respectively. We've seen seeing rumors that Samsung is preparing a newer model for the range, which it's been reported is a Galaxy A9 Pro device.

Today's rumor is that a Samsung handset with the model designation of A9100 has appeared on the GFXBench website. This device could be the rumored Galaxy A9 Pro, but unfortunately the GFXBench site does not provide any clues as to the ultimate end model this handset could be. Taking a look at the specifications, it's unclear what this device will be: the A9100 is showing as using a 5.5-inch, 1080p resolution display, which is smaller than the existing Galaxy A9's 6.0-inch, 1080p display. Sometimes, the reported size of the display is inaccurate compared with the real device, but all the same it's possible that the A9100 is not the A9 Pro as had been previously suspected. The A9100 appears to use the Qualcomm Snapdragon 652, a newer generation, mid-range System-on-Chip, but with 4 GB of RAM, more than the current Galaxy A9 (with 3 GB). There's a higher resolution rear camera, too, at 16MP compared with the Galaxy A9's 13MP – this higher reported resolution rear camera is joined by a front facing 8MP camera. The new device was tested with 32 GB of onboard storage and Android 6.0.1 Marshmallow.

It's unclear how close the A9100 is to being released: most Samsung devices do not have Android Marshmallow yet, although we've recently seen Samsung update the Samsung Pay application to include compatibility for the newer version of Android. Customers must have the application updated by the 16 February, so perhaps this could be a pointer to the A9100 being released on this date? We do not have long to wait. 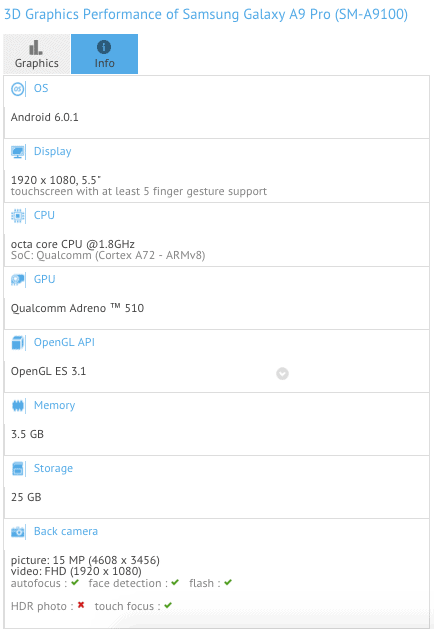