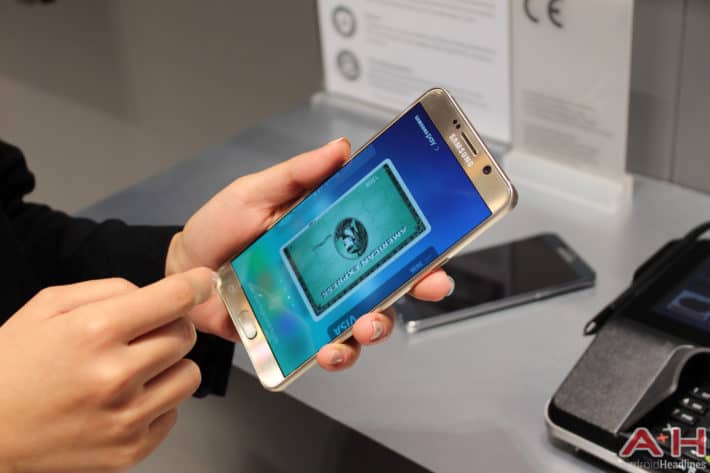 When Samsung first announced its Samsung Pay, Canada was conspicuously absent from the list of countries where it would be available.  After Samsung Pay hit the US on September 28, 2015, Canada thought surely they would be next, but nothing.  However, back in October some Samsung job openings appeared for the Vancouver area that very much sounded like they were for Samsung Pay.  This was either good news that Samsung Pay was coming or Samsung was just using Vancouver for the offices.  By adding Canada to its “2016 Roadmap” we now know for sure that Samsung Pay will eventually arrive in Canada, just not exactly what time-frame.

We are betting that whenever Samsung pay does arrive in Canada, it may have limited capabilities – so far only American Express is signed up to work in Canada.  Most likely Visa and MasterCard will jump onboard; it is just a matter of getting the Canadian banks that issue the cards to agree to the terms.  More customers use Visa and MasterCard, so it could slow Samsung Pay’s adoption rate.  In order to expand Samsung Pay, Samsung is promising it will support loyalty and gift card purchases at some point, but until it does, Samsung Pay will function a lot like Apple Pay in Canada.

What sets Samsung Pay apart from Apple Pay and Android Pay is that payments can be made two ways – via NFC (Near Field Communication) and via MTS (Magnetic Secure Transmission) or LoopPay.  The NFC purchasing is what Android Pay and to an extent, Apple Pay uses.  The retailer must have a machine that reads NFC transmissions and in Apple Pay’s case, they must have a reader specifically designed for Apple Pay.  Samsung was thinking ahead and purchased LoopPay allowing them to utilize MST payments as well, so most merchants that have the old swipe machine can accept a payment from Samsung Pay.  This opens the door to many smaller merchants that still require you to swipe your card.  Not only is it convenient for all involved, but it is also very secure since your credit or debit card number never leaves your device or enters the merchant’s reader.  It creates a random token number that only the bank can decipher so if a hacker steals a merchant’s accounting records, your card number is nowhere to be found.

One thing is certain – mobile payments are here to stay.  It gives consumers a method to carry around all of their credit cards, loyalty cards and rewards cards all on the one device that most people take everywhere with them.  I have not carried a wallet or cash around with me for years – I would grab my debit card and take off.  Apps have already allowed us to make easy mobile payments at retailers such as Starbucks and Tim Hortons.  From many studies, we know that Canadians love to shop online and Samsung Pay can only expand the amount of sales, while at the same time make it easier on the consumer.

When Samsung Pay hits Canada in 2016, they way Canadians make their purchase will quickly change, especially when Visa and MasterCard and the Canadian banks are onboard.  Now that the fingerprint sensor can be used to authenicate mobile payments, Samsung Pay will soon allow online shopping purchases to be finalized with the touch of your finger – no more information to enter online.  You will be able to make an Amazon purchase or order an Uber ride and pay for it by touching your fingerprint sensor.  As more and more Samsung devices are sold with Samsung Pay, the more prevalent it will become.  Samsung has even promised Samsung Pay support for its new Gear S2 smartwatch – talk about convenience.  It will take some time, but Samsung pay will quickly invade Canada once it started.