As Samsung takes the Galaxy S7 and Galaxy S7 Edge from the land of explosive leaks to a jam-packed official status, more and more accessories are cropping up for the iconic pair of flagship handsets. With Spigen having made the big reveal for their line of cases before the start of the Mobile World Congress in Barcelona, other accessory makers had a fairly high bar to reach for. In order to help them reach that bar for their biggest foray yet into official handset accessories, LINE Corporation, maker of the world-famous LINE messaging app, has partnered directly with Samsung to produce a line of accessories for the newly announced Galaxy S7 and S7 Edge.

LINE's accessories so far include a clear cover for the phones, a battery pack made to fit both phones and a matching set of stand-up wireless chargers, allowing users to take advantage of the Galaxy S7 lineup's always-on feature while the phone is charging. The accessories feature LINE's avatars, "Line Friends". Line Friends, according to LINE, each have their own personality and are featured heavily in their products, primarily as stickers, emoji and mascots for the LINE app. The LINE accessories will be produced in conjunction with Samsung as official accessories for the Galaxy S7 and S7 Edge, meaning that worries such as if the chargers or battery packs offer the right voltage and amperage will not be an issue.

These official accessories from Samsung and LINE have not seen an announcement as far as release windows and regions or availability for additional designs and different types of accessories. Since LINE is fairly popular in Asia, mainly China and Japan, it's safe to assume they'll likely see release there in the first wave, if not as the very first release regions. Thanks to Disney's fairly popular TSUM TSUM game, among other apps, LINE has seen a surge of popularity worldwide and in bigger markets such as the United States, as well, making a worldwide release over time fairly likely. These official accessories will also be available in more plain variants that don't feature LINE characters, lending a more conservative and traditional design. 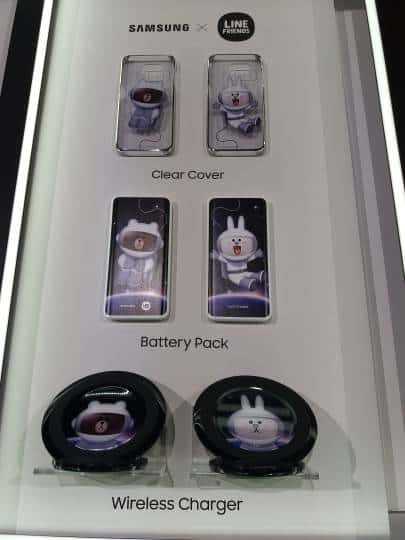