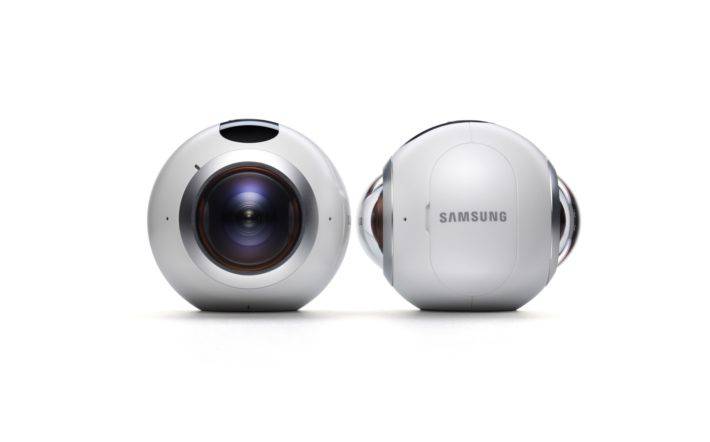 At this year's Samsung Unpacked event in Barcelona at Mobile World Congress 2016, Samsung made huge strides in presenting as much content as possible in virtual reality.  The show started as the stage unfolded like a box, revealing a 360-degree stage representing what was about to be shown.  This 360-degree theme continued throughout the show with the unveiling of the Galaxy S7 and S7 Edge, where Samsung had everyone in the audience put on Gear VR headsets located below their seats, presenting the new phones literally in front of everyone's eyes.  To prove a point Samsung continued to unveil a brand new consumer-level 360-degree camera dubbed the Gear 360.

This little camera, designed to be portable and simple to use, captures 360-degree video designed for VR consumption without complicated setup or configuration.  The design of the Gear 360 goes perfectly with the name, as two 15-megapixel cameras sit on either side and feature fish-eye lenses to envelope as much of the world as possible.  These capture a full 360-degree video or image by blending the two images together in a spherical fashion.  The 0.5-inch display included on the unit will help you see exactly what you're filming, and since this sort of device isn't intended for ultra-accurate close-ups or perfectly framed shots the small size of the display won't be a problem.

Below the sphere sits a handle, making it easy to tote the Gear 360 around and film your world without hands getting in the way.  If you'd rather place it on a flat surface to record video or images instead, the handle opens up to reveal a hidden tripod for keeping the camera straight and steady.  As far as quality goes these dual 15-megapixel sensors capture video at 3840 x 1920, 30FPS, which is just a hair shy of 4K VR video.  Images will be considerably higher resolution and are the full 30-megapixel size of both cameras combined.  It's even designed for low light capabilities with a Bright Lens F/2.0 as Samsung calls it, and is both water and dust resistant at IP53.  The biggest downside here is that many of the connected features, such as viewing or editing the video, can only be done from specific Samsung phones.  The microSD card slot inside will help store plenty of pictures and video, up to 128GB, and the 1,350mAh battery will last for quite a few hours of constant video too.  The Gear 360 will be available in Q2 2016 in select countries, but has no set price just yet.