Several years ago, smartphones slowly but surely began replacing point-and-shoot cameras in the sense that consumers found it more convenient to use their handsets for capturing moments, rather than carrying an additional device. This led to a fierce competition between smartphone makers and resulted in new camera technologies being developed for the mobile market. While the main focus was initially directed towards increasing the number of megapixels of any given unit, nowadays smartphone manufacturers try to win the hearts of consumers and photography enthusiasts by offering advanced technologies like image stabilization, improved performance in low light conditions, and fast autofocus. This is the reason why the new Samsung Galaxy S7 sports a 12-megapixel camera as opposed to a 16-megapixel unit like last year’s model, and it’s also the reason why the Galaxy S7 introduced a new technology called Dual Pixel autofocus.

The 16-megapixel camera found on last year’s Samsung Galaxy S6 uses phase detection autofocus (PDAF) regardless of whether you’re looking at the model with Sony’s IMX240 sensor or the one using Samsung’s in-house ISOCELL sensor. However, the Samsung Galaxy S7 introduced at MWC 2016 ditches PDAF in favor of a different technology called Dual Pixel autofocus. In fact, the Galaxy S7 is the world’s first smartphone to utilize Dual Pixel autofocus technology. What does it mean exactly? For starters, let’s explain how PDAF works in order to better understand what Dual Pixel brings new to the table. Roughly 10% of pixels on a sensor using phase detection autofocus are paired with focusing photodiodes. These pixels / photodiodes are placed strategically across the sensor’s area, and take measurements in order to figure out where the camera’s lens needs to be focusing.

Dual Pixel autofocus works on the same basic principle. However, technically speaking it can achieve much higher focusing speeds and greater image quality in a wider range of conditions on account that 100% of the pixels are paired with two photodiodes each. In other words, Dual Pixel technology allows each and every pixel to contribute to better focus, whereas PDAF utilizes only up to 10% of pixels to do so. Combined with 1.4um pixels and an f/1.7 aperture which allows 25% more light to hit the sensor, the Galaxy S7’s camera should deliver blazing-fast focusing speeds and higher quality images, even in low-light conditions. It all sounds very exciting on paper, but how the Samsung Galaxy S7 and the Dual Pixel technology will fare against its rivals, in practice, remains to be seen. Let’s not forget that Sony also introduced a new autofocusing technology with the release of the Xperia X lineup at MWC, called Predictive Hybrid Autofocus. 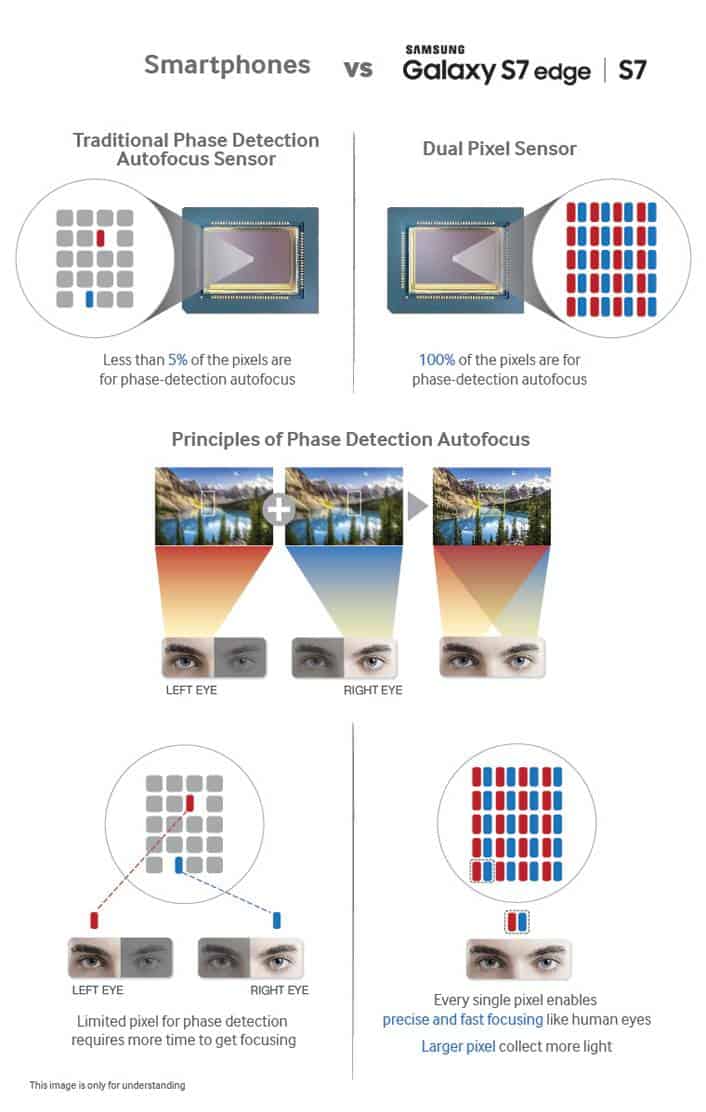