We’re getting closer and closer to the launch of the Galaxy S7, which is set for this Sunday in Barcelona at their annual Unpacked event prior to Mobile World Congress kicking off on Monday. The Galaxy S7 and Galaxy S7 Edge have already been rumored to be available for pre-order right after the event, with the retail date being March 11th (and with the Gear S2 Classic 3G launching carriers in the US that day, it seems pretty likely). However, now we have another leak. This time it shows us plenty of the headlining features of the new devices from Samsung.

According to this leak, it looks like we’re sporting a 5.1-inch QHD display for the Galaxy S7, and a 5.5-inch QHD display on the Galaxy S7 Edge both of which we had heard from other leaks. It’s also running Android 6.0 Marshmallow along with “new TouchWiz skin”, again we pretty much knew it would launch with Marshmallow and a revamped version of TouchWiz as it does each year. We’re looking at a Qualcomm Snapdragon 820 powering the show with 4GB of LPDDR4 RAM and 32GB of storage. Although it’s worth noting that the promo states “From 32GB” so we’ll likely see a 64GB and possibly a 128GB model. It also notes that there will be a microSD card slot this time around. Other features include 3,000mAh and 3600mAh battery capacities, respectively, as well as pressure sensitive display and IP67 water protection.

Many of these features here have been rumored and leaked for weeks now. While this should still be treated as a leak and taken with a grain of salt, it’s looking more and more likely that these are the feature-set for the Galaxy S7 and Galaxy S7 Edge. The promo also notes that pre-orders start on February 21st and the launch date is March 11th. Also coinciding with the information we got yesterday. All will be revealed on Sunday as Samsung takes the stage in beautiful Barcelona, Spain to announce the Galaxy S7 and Galaxy S7 Edge to the world. We are already live in Barcelona and will be at Unpacked to bring you the latest from Samsung’s event. 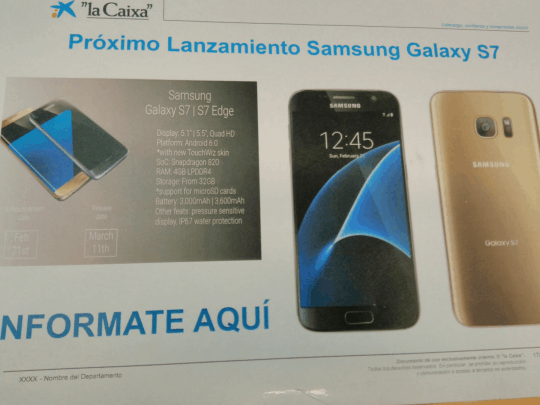