Over the last few weeks and months the rumor mills have been in full swing ahead of MWC 2016. Most of the talk of course, is surrounding the latest devices set to be released by Samsung, the Galaxy S7 and the Galaxy S7 Edge. However, they are not the only devices which are now expected to be unveiled at the event, as it largely rumored that Samsung will also unveil a new Gear VR 360-camera as well. One which until now, had been going by the ‘Project Beyond’ moniker. Either way, with the launch date creeping ever closer and following on from the 360 point, Samsung today has announced that those who are tuning into the launch event, can do so in 360-video. In fact, the announcement makes it clear that regardless of whichever device you are using, there is a ways specifically designed to maximize the experience of Samsung’s unpacked event in Barcelona.

If you happen to be the proud owner of Samsung’s Gear VR headset, then you will be able to watch the event by heading over to the Oculus Store and searching for the ‘Unpacked 360 View’ app. If you would like to watch the event in 360 but don’t have the Gear VR and are making use of another headset you can always download the Unpacked 360 View app from the Play Store (head through link below). While, if you are watching from a desktop, you can simply head over to the company’s unpacked site and watch the event there.

Whether you plan to watch the event on your desktop, mobile or through a virtual reality headset, you will want to make sure you are tuning in on February 21 at 7 p.m. (CET) as this is when the live streaming is due to begin. For those in the U.S., this will work out to be 1pm EST and 10am PST. Although watching through any of these mediums won’t exactly replace the experience of being there live in Barcelona, the option to take part in Samsung’s first ever 360 live streaming of the event will likely be an experience in itself and one worth considering. 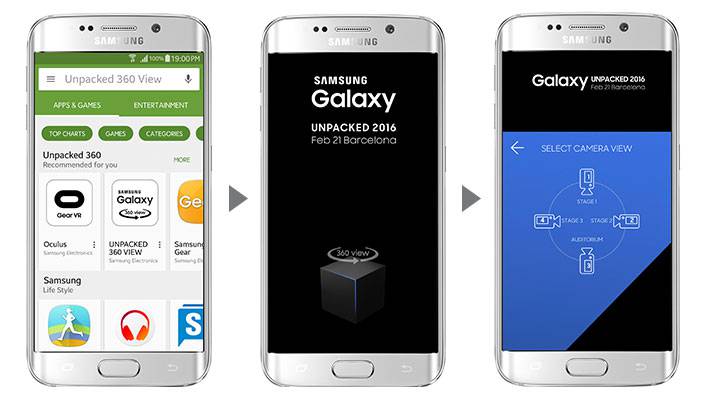