Do we have a good one for you today – the newly released LG G5 goes up against the newly released Samsung Galaxy S7 Edge.  We have the clash of the Android titans from South Korea to bragging rights for the best new smartphone of this year so far.  The completely redesigned LG G5 looks to compete with the refined Galaxy S7 Edge that had its complete makeover last year.  The all-metal G5 tackles the glass and metal Galaxy S7 Edge with its dual curved display.  Which device packs the best specifications and makes use of its features the best way possible – is there any real innovation left when it comes to smartphones? Let’s take a look just to see what these two devices have in common and then we will take a closer look at each individual device.

The LG G5 and Samsung Galaxy S7 Edge are quite different in design, but have much in common, and it starts with an almost identical physical size and weight.  Both displays use the QHD resolution or 2560 x 1440 pixels, but use different technologies and slightly different sizes.  Both devices are running Android 6.0 Marshmallow on a 64-bit processor, and in some cases the same Snapdragon 820 and Adreno 530 GPU for graphics.  They both pack 4GB of DDR4 RAM, they both offer a 32GB variant and they both offer a means to expand the memory by 200GB via a microSD card.  Although they achieve the results in a different manor, they both offer an excellent camera area – a real battleground between LG and Samsung.  Both come with a fingerprint sensor for unlocking the device and authorizing mobile payments.  They have the usual suspects – WiFi, Bluetooth v4.2, GPS, NFC, a microUSB port (Type-C on the G5 an V2.0 on the S7 Edge) and they both offer a means to quick charge their batteries. 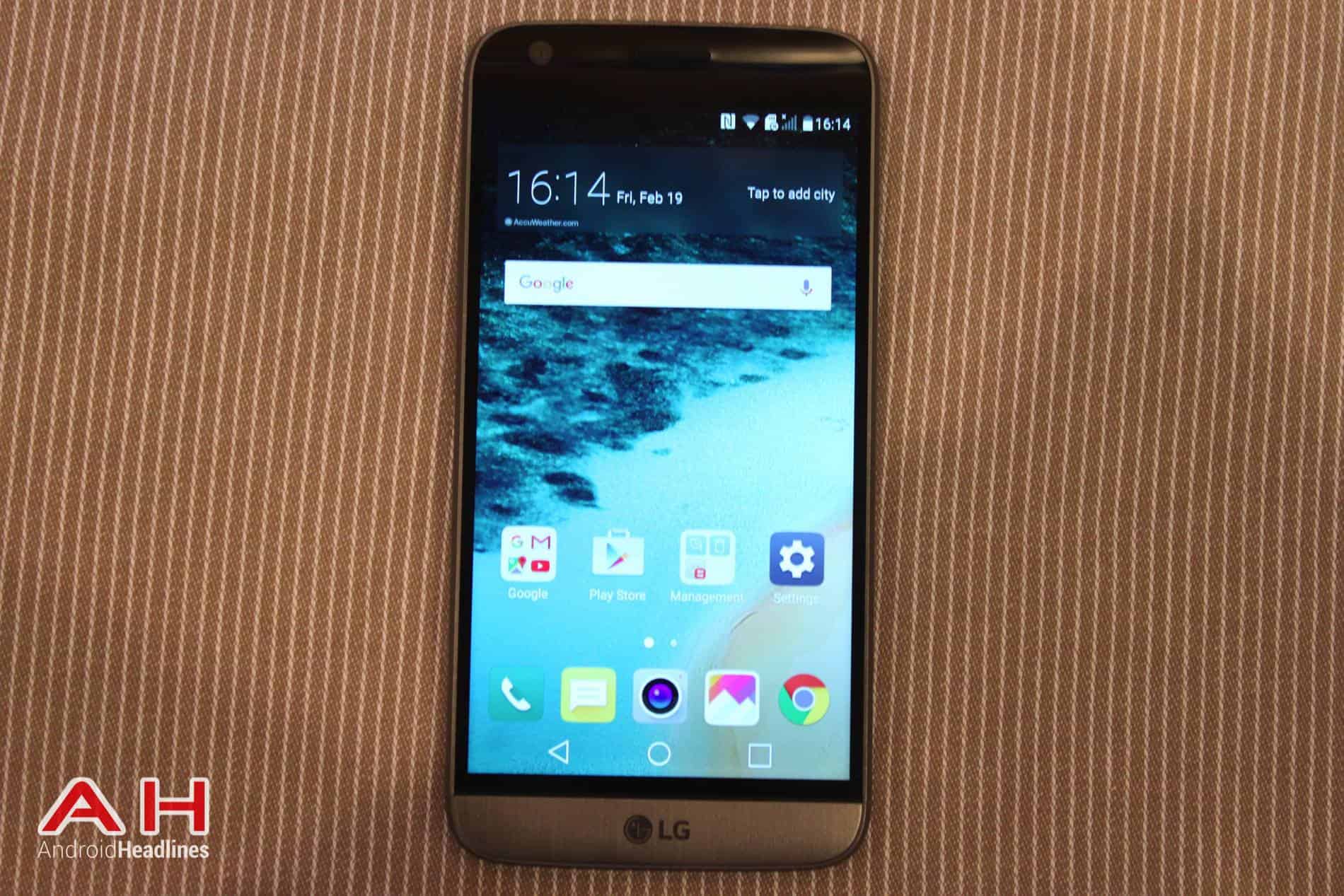 The new LG G5 is a complete makeover of the LG G4 – LG changed just about everything when they designed the G5.  While G4 lovers may still be in disbelief, I would bet that they are at the very least curious of this new beast.  LG really put some thought into its design and upgraded where upgrades were need – plastic to metal body – and yet were able to keep those features most dear to users – memory expansion and removable battery.  Who said that you couldn’t have a metal body and still remove the battery?  Let’s take a closer look at the new LG G5 and see just how the specs and design hold up to the new Samsung Galaxy S7 Edge.

The LG G5 sports a 5.3-inch IPS LCD QHD display with a resolution of 2560 x 1440 pixels and 554 pixels-per-inch (PPI) that is slightly smaller than its predecessor’s 5.5-inch display and the Samsung S7 Edge’s 5.5-inch display and 534 PPI.  Both the G5 and S7 Edge use the ‘always-on’ display feature.  The brains come from the newest Qualcomm Snapdragon 820 quad-core processor with 4GB of DDR4 RAM and 32GB of internal memory, expandable to 200GB via a microUSB card.  This goes up against the same processor or Samsung’s own Exynos 8890 with comparable specs and 4GB of DDR4 RAM and 32GB or 64GB of faster UFS 2.0 flash memory with room to expand up to 200GB.

The LG G5 upped the camera area from a 16MP sensor on the G4 to one 16MP and another 8MP for dual cameras and new software…the 8MP has a wider angle to it allowing the user to capture more in the photo.  This goes up against a completely revamped S7 Edge camera area the uses a new 12MP sensor with Dual Pixels.  The LG G5 retains the 8MP FFC from the G4 for selfies and video chatting and the S7 Edge uses a 5MP FFC.  LG dropped the battery from the 3,000 mAh found on the LG G4 to 2,800 mAh, but it is removable and has quick charge capabilities.  Samsung increased the non-removable S7 Edge battery to 3,600 mAh but it has quick charge and quick wireless charge built-in.

The big news are the modules that can be used with the LG G5 – by pushing a button on the side, you can slide out the battery and slide in different modules.  One such module adds a larger battery and camera controls and there is another one by B&O for higher sound quality, etc. LG kept its built-in IR Blaster and LG finally added a fingerprint sensor at the expense of the rear set of buttons, although the sensor also clicks inward and acts as an on/off switch as well.  The volume controls return to the side of the device.  LG also followed Google’s lead by starting to use the Type-C USB port on the G5.  The LG G5 measures 149.4 x 73.9 x 7.7 mm, weighs in at 159 grams and comes in Silver, Titan, Gold and Pink.  It should be available in April, with Verizon, AT&T, Sprint and Best Buy already announcing they will carry the LG G5. 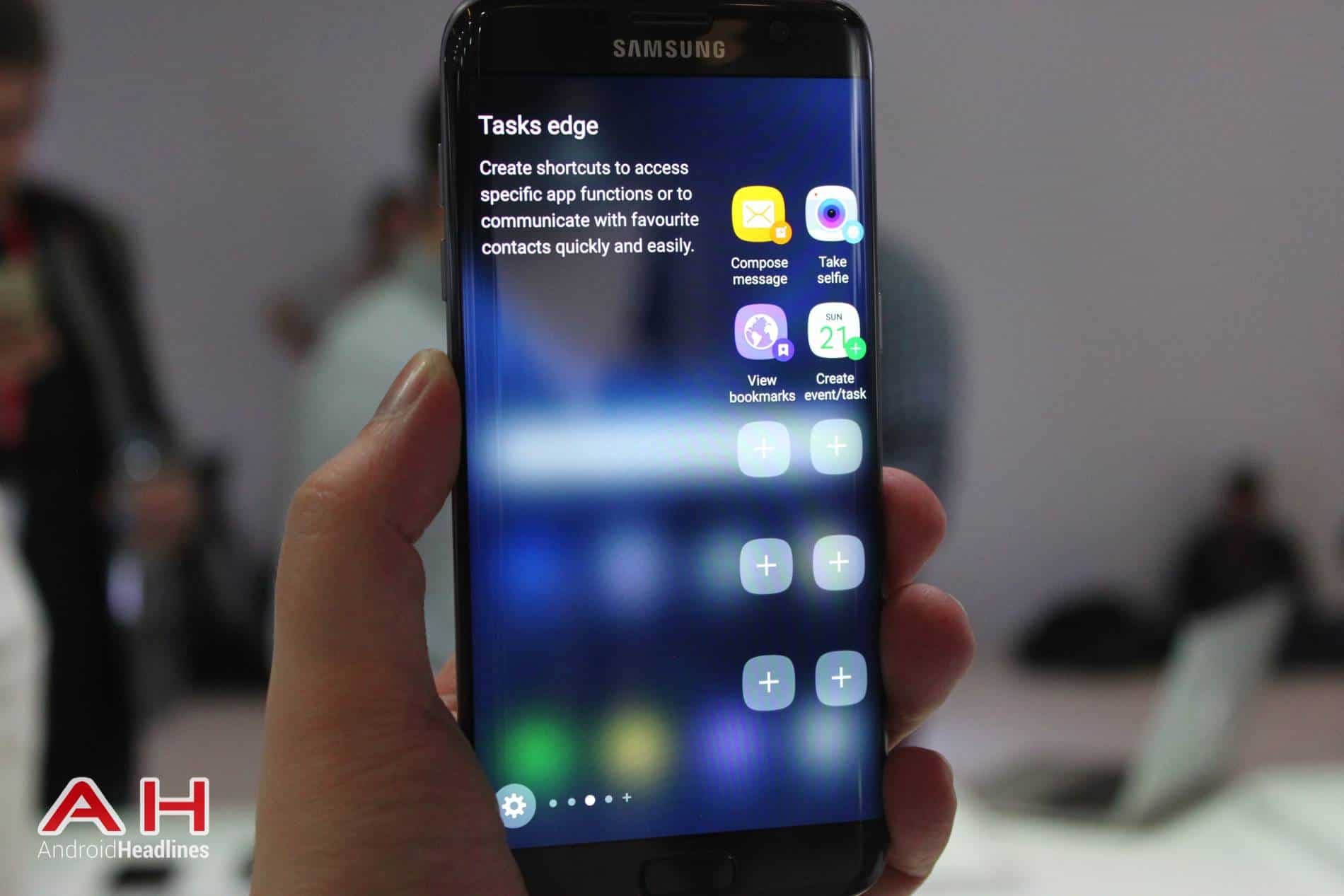 The new Samsung Galaxy S7 Edge is more evolutionary in nature after last year’s newly redesign Galaxy S6.  This is not to say that many improvements were not made, however, most of the upgrades are inside the device and not visible on the outside.  Does that make it any less exciting than its main competitor, the LG G5…well, sort of?  The Galaxy S7 Edge is still a beautiful device, possibly even more so than the LG G5’s all-metal body.  In this competition we are looking at specifications and the innovations that comprise those specs, so let’s take a look at the new Galaxy S7 Edge and see what conclusions we arrive at.

The Galaxy S7 Edge has a beautiful 5.5-inch Super AMOLED display with a QHD resolution and 534 PPI as compared to the 5.3-inch IPS LCD QHD display on the LG G5 with 554 PPI.  The S7 Edge also sports a dual-curved display that can function on its own to access quickly your ten favorite contacts and more.  The Galaxy S7 Edge uses either an Exynos 8890 octa-core processor or the same Snapdragon 820 quad-core  processor found in the LG G5 depending where you live.  Both devices pack 4GB of DDR4 RAM and the S7 Edge offers either 32GB or 64GB of faster UFS 2.0 memory – the LG G5 offers 32GB of memory.  Both offer room for expansion up to 200 GB via a microSD card.

The camera area of the Galaxy S7 Edge was changed quite a bit this year – gone is the conventional 16MP award winning shooter from the S6 models and instead is a new Dual Pixel 12MP with a larger sensor, allowing it to take in more light and information than the smaller 16MP sensor.  They also added a very large aperture of f/1.7, made autofocus much faster and retained OIS.  This goes up against a new 16MP camera and an 8MP dual camera setup in the LG G5.  The S7 Edge uses a 5MP wide-angle lens and Live HDR for its FCC and this goes up against the 8MP FCC on the LG G5.  The S7 Edge includes a large 3,600 mAh non-removable battery with quick charge and quick charge wireless charging as well.  This goes up against the LG G5’s smaller 2,800 mAh removable battery, also with quick charge, but no wireless charging.

The distinguishing things found on the Galaxy S7 Edge have to start with the dual-curved edge – it is stunning to view and even slightly functional.  The S7 Edge also offers IP68 water and dust protection – great for those beach goers or users that work in dusty environments.  You can also use Samsung Pay to make mobile purchases just about anywhere you can swipe a credit or debit card.  The S7 Edge also has a heart rate monitor and oxygen saturation sensor that ties in with S-Health from Samsung.  The S7 Edge offers built-in quick wireless charging, something the all-metal LG G5 cannot muster.   The S7 Edge measure 150.9 x 72.6 x 7.7 mm, weighs in at 157 grams and will be offered in Black, White, Gold and Silver. 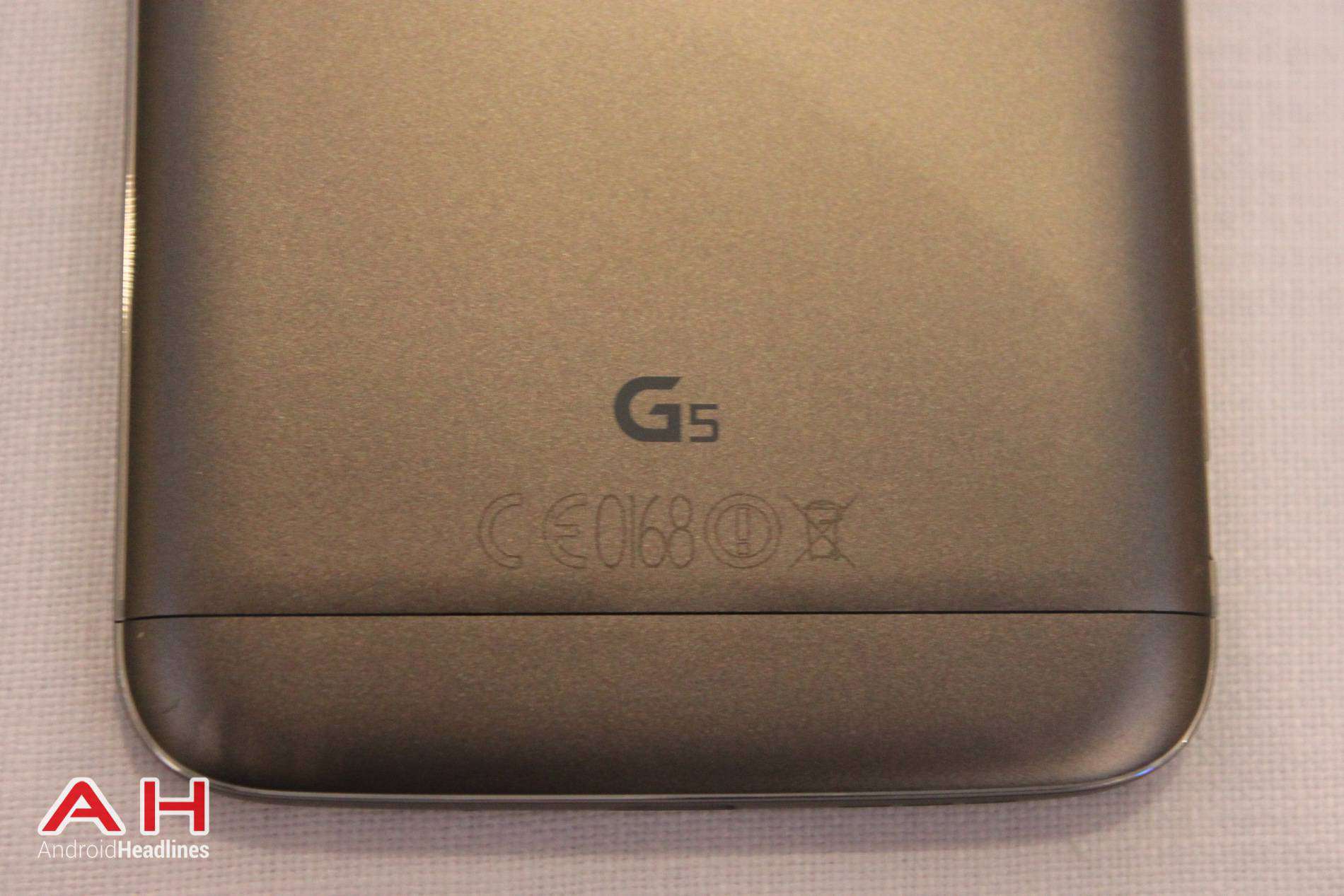 This was a tough decision, but I am picking the LG G5 as the winner of this specification comparison. While it is true the S7 Edge looks nicer, added back expandable memory, offers wireless charging, a heart rate monitor, oxygen sensor and Samsung Pay, the new LG G5 just seems to offer more innovation.  LG took a huge chance redesigning the G5, but it seems that they really put a lot of thought into the design and really offered options that customers want.

They both use a QHD display, almost the same size, even the processor is the same or certainly equivalent to one another, both have 4GB of RAM and they both offer a means to expand the internal memory.  Both manufacturers are taking a big step in their camera areas – Samsung reduced the number of megapixels from 16 to 12 and LG is offering duo cameras…neither worked out too well for HTC.  Both devices offer the ‘always-on’ display and offer their own unique twist.  So you can see that these two devices offer leading edge technology, making selecting a winner a little tough.

However, then we come down to the one thing that the Galaxy S7 Edge does not have an answer – the removable battery – but it is so much more than simply a tray that slips out to replace the battery.  If all goes well, it will extend the use of a smartphone by allowing users to install ‘modules’ to perform different tasks.  That my dear readers is called innovation and that is why I am selecting the LG G5 as the winner of this comparison.  Does that make the Galaxy S7 Edge any less of a great device…no…but it takes away a little of its excitement in my eyes.