It is no secret that smartphones are data hungry devices. In fact, it is also no secret that they seem to becoming more data hungry with each generation. Thanks to smartphones continually becoming capable of doing more for their owners. Additional features, which although make life a little easier, usually come at the cost of the amount of data they consume. Although, it is not really the fault of the smartphone, as it is typically apps that are the root cause for data consumption and thanks to their always-in-use levels of performance, they can sometimes drain far more data than owners might realize.

In fact, this seems to be exactly what was found by an app-usage study by Opera. The company behind the Opera Browser and Opera Max pulled the results from millions of Opera Max users and found that apps running in the background can account for as much as 30-percent of all mobile-data usage. Of the apps noted, it seems Facebook Messenger and Gmail were two of the most data hungry, with as much as 73-percent of the data consumed by these apps, being consumed while running in the background. Likewise, Google Drive and WhatsApp were two more background data hungry apps, albeit not to the same extent with their background consumption levels coming in at the 50-percent marker.

As a direct result of the findings and in a move to combat such background data drainage, Opera has today announced the introduction of ‘Smart Alerts’ to Opera Max. As the new feature’s name suggests, the purpose of the new feature is to offer device owners a smarter way to deal with background data draining apps. Smart Alerts achieves this by firstly identifier which apps are running in the background and then which apps are consuming too much data. Following which, Smart Alerts can notify the user of the consumption level and suggest how to better manage the app(s) in question, including offering a quick tap ability to stop the app from consuming any more data while not in use. Smart Alerts will appear in the app as a card in the “Data usage timeline”, under “App management” and will also take shape through the use of pop-up notifications – for the apps which seem to be consuming heavier amounts of background data. As such, the feature is one which Opera states will offer you an ever greater level of app control, then you will find with the likes of Android 5.0 (Lollipop) or even Android 6.0 (Marshmallow). You can check out some of the Opera Max findings in the infographic below or if you have yet to try out Opera Max, download the app through the link below. 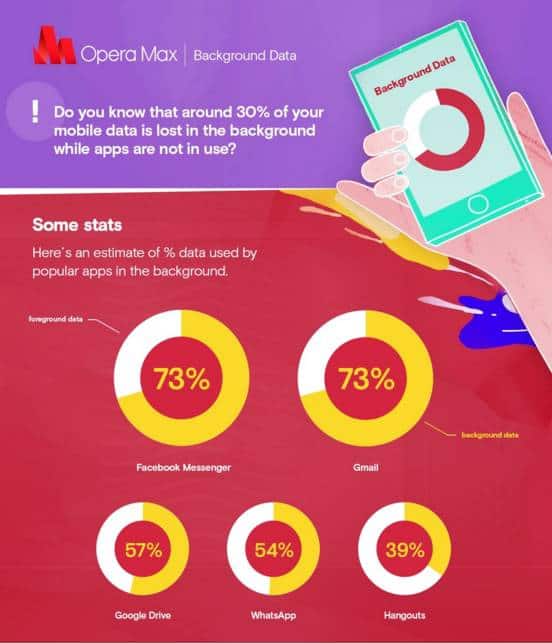