Over the better part of the last decade, smartphones have become ubiquitous globally. Or so many of us would like to believe anyways. To be honest though, they are pretty much everywhere you look and you couldn’t miss ’em even if you wanted to. While most smartphone users would agree that the devices have indeed enriched our lives by allowing us to do things that would have needed a bulky laptop a decade ago, many others would complain that the smartphone in particular (and technology in general) is to be at least partially blamed for a number of problems being faced by twenty-first century society. From being safety hazards on the roads, to being responsible for privacy and security breaches, the complaints against smartphones are a dime a dozen.

Indeed, most observers and behavioral psychologists agree that such devices have had a negative effect on the social skills of today’s youngsters but the way things are today, life as we know it will be well-nigh impossible with those glass slabs that we tend to carry around everywhere these days. While many around the world seem to be of the opinion that smartphones have become a “necessary evil” for large sections of the society, the results of a new study by Pew Research Center seem to indicate otherwise. According to the Washington D.C.-based think tank and public policy research group, the world is pretty much still divided along the lines of the ‘haves’ and the ‘have nots’ when it comes to smartphones. As per a chart posted on Twitter by the group’s demographer, Mr. Conrad Hackett, smartphone ownership varies wildly between one part of the world to another.

As can be seen from the chart below, as many as 88 percent of South Koreans use smartphones, but only 4 percent of the inhabitants of sub-Saharan African countries like Ethiopia and Uganda actually have access to such devices. While most of the other numbers, admittedly, are along expected lines for those in the know, the real surprise for some might be the numbers pertaining to Japan. Apparently, only 39 percent of people in the tech-crazy and financially well-off nation own smartphones, which puts it squarely in the same group as emerging economies like Vietnam (35 percent) and Brazil (41 percent). As for the three largest smartphone markets in the world, the US has the highest smartphone penetration at 72 percent, while China comes in at 58 percent. Meanwhile, only 17 percent of the Indian population use smartphones, which puts it below Senegal (19 percent) and Ghana (21 percent) in terms of smartphone penetration. 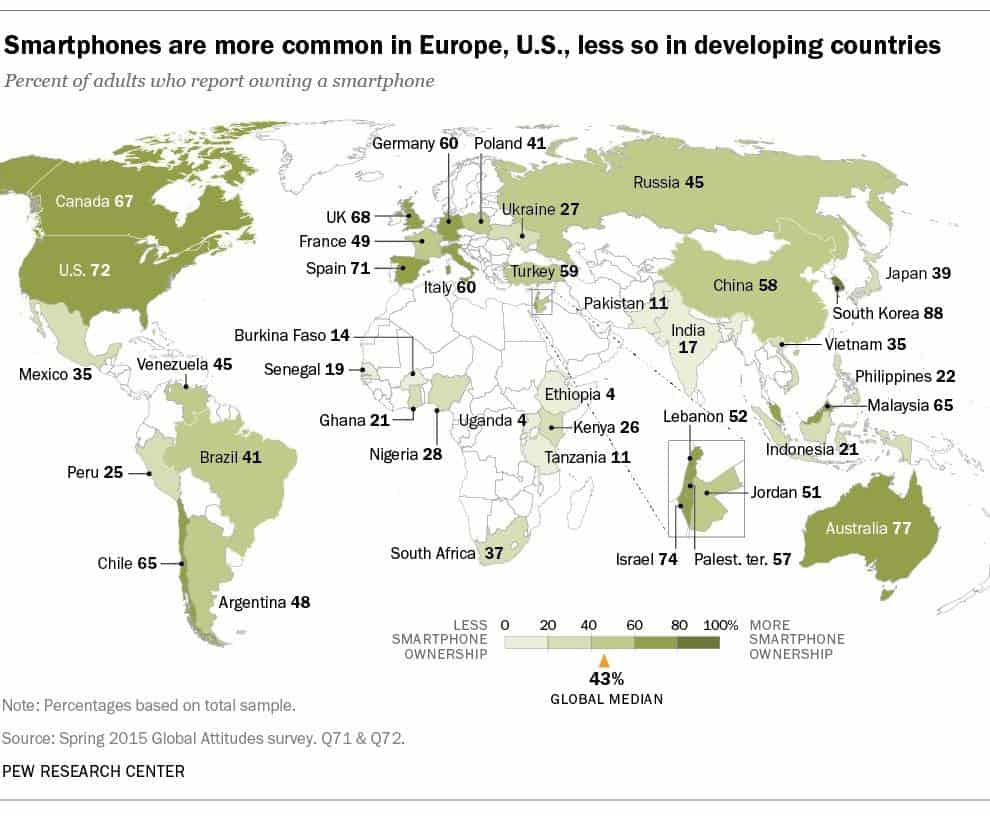