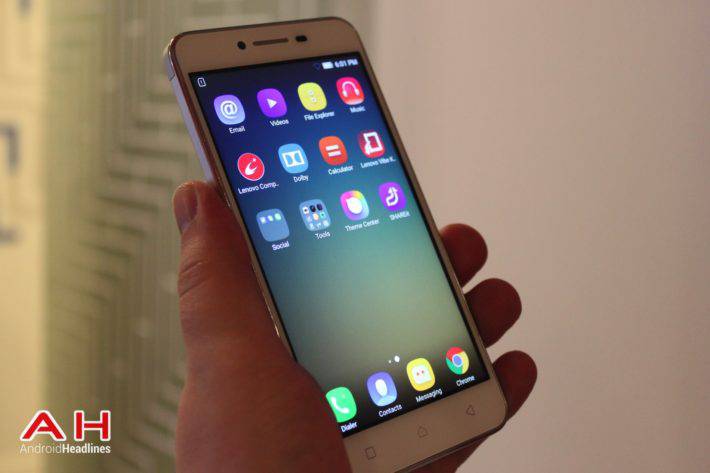 Lenovo has been quite active as far as smartphone announcements go lately. The company has introduced quite a bit of smartphone this year, including the Vibe K4 Note, K5 Note and Vibe P1 Turbo. Now, this China-based company has actually opted to announce five additional smartphones and tablets during the Mobile World Congress (MWC) in Barcelona which is currently ongoing, the Vibe K5 and K5 Plus smartphone, along with the TAB3 series of tablets. That being said, we've already covered the main announcements of all those products, and are here to take a closer look at the Vibe K5 Plus, read on.

We've actually paid a visit to Lenovo's booth at the Mobile World Congress today, and managed to get some really nice shots of their newly-announced Vibe K5 Plus handset. Now, the Vibe K5 wasn't there, but the design is completely identical, so you're basically looking at both of those devices. As you can see, the Vibe K5 Plus is made out of metal, and it sports three capacitive buttons below the display, overview (multitasking), home and back, respectively. Physical keys are placed on the device's right-hand side, and the speaker grills are located in the lower part of the phone's back. All in all, Lenovo K5 Plus is a nicely designed handset, and it comes in Silver, Champagne Gold and Graphite Gray color variants, and as you can see, we played around with the Graphite Gray variant.

The Lenovo Vibe K5 Plus sports a 5-inch fullHD (1920 x 1080) display, along with 2GB of RAM and 16GB of expandable internal storage. This smartphone is fueled by the Snapdragon 616 64-bit octa-core processor, and an Adreno 405 GPU is here for graphics processing. The 13-megapixel snapper is placed on the back of this smartphone, and a 5-megapixel camera can be found up front. The 2,750mAh battery is also a part of this package, and it is not removable. There are two SIM card slots (2 x micro SIM) available on the inside, and the device weighs 142 grams. 4G LTE connectivity is also a part of this package, and the Vibe K5 Plus measures 142 x 71 x 8.2mm, in case you were wondering.