Today at Mobile World Conference, we got to see two of the most awaited smartphones finally arrive on the big stage. The Galaxy S7 and S7 Edge made their debut shortly after LG’s new G5 made an early morning appearance. Along with the Galaxy S7 series, LG’s beautifully crafted LG G5 was the talk of the town. Not only did LG bring back a microSD card slot, but they introduced a feature that many smartphone manufacturers should take note of. Along with a Snapdragon 820 processor and dual cameras, LG decided that for their device, a 2,800 mAh battery would be plenty.

The reason for this is that LG made the battery removable so the user can replace it when low on charge. Now of course with the latest and greatest from Samsung, you can’t exactly remove the back plate and replace the battery if needs be. LG however, not only included a removable battery but also thought of a better way to remove it. On the LG G5 you can pull down on the bottom which will release the battery. From there you just add your new battery and slide the contraption back together.

With the LG G5 replenished with new hardware and features, the company took to twitter today and shot off a few warning shots at Samsung. The first tweet the company started off with was a picture of the LG G5 with its microSD card slot extended out and the user placing one in. The tweet said “Welcome back to Team microSD,” with Samsung’s handle attached while hailing the hashtag “#TheNextGalaxy.” That tweet of course was to poke fun at Samsung for removing expandable storage from their Galaxy S6 last year and bringing it back with the S7. If that wasn’t enough, LG charged at Samsung again by replying to a tweet of the Galaxy Note 4 and how you can exchange the battery. This time LG tweeted “RIP” with a skull emoji, boasting about how much easier it is to replace the battery in the G5. While these two are direct competitors, it is always good to see the light-hearted exchanges between them. 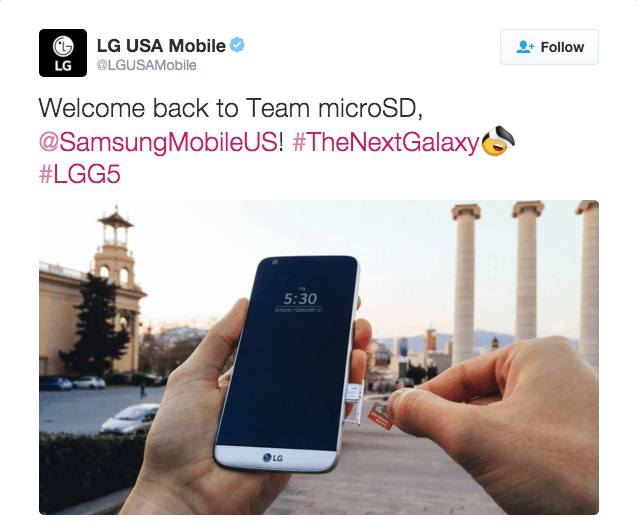