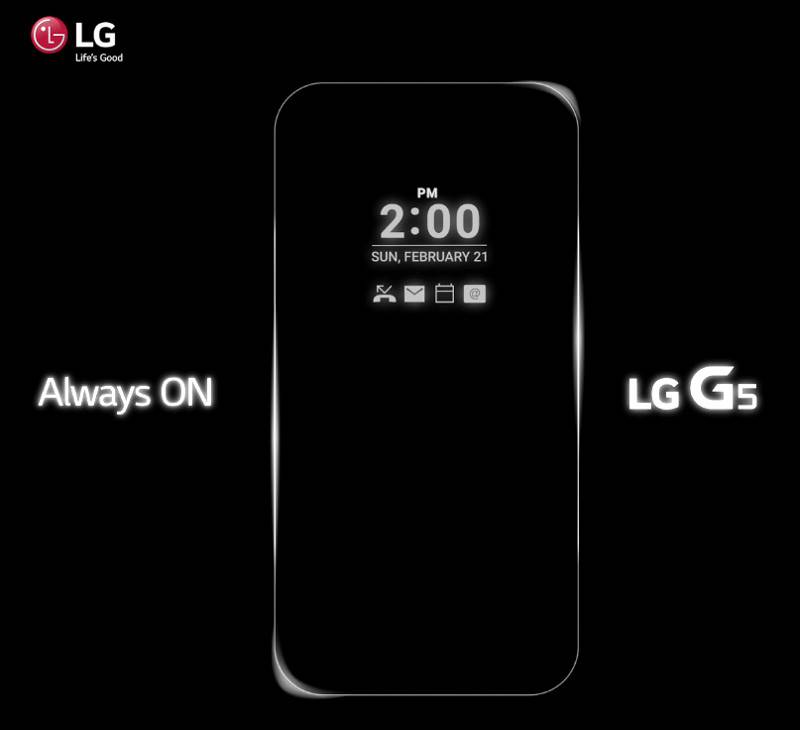 LG has managed to surprise quite a few people when the company announced that the G5 flagship press event will be held on February 21st. This basically means that both Samsung and LG will introduce their flagship offerings on the same date as part of the MWC, and it will surely be a really interesting day for all of us who love mobile technology. That being said, we’ve seen quite a few LG G5 rumors and leaks thus far, a number of alleged cases for this device leaked, and we’ve seen some leaked renders as well.

It was just a matter of time before LG starts teasing their upcoming flagship, and that has just happened. This Korea-based company has just confirmed, via their official Facebook page, that the LG G5 will feature an always on display. This is not exactly a subtle confirmation by LG considering they actually showcase the info on the phone’s display, and have also included the following caption: “Never go asleep while others do. LG G5, Always ON,” and this is a pretty obvious confirmation. The confirmation came in the shape of a GIF image which you can check out down below. So, it seems like the LG G5 will ship with an always on display, but it won’t be a separate panel like we’ve seen on the LG V10. Now, it is worth mentioning that Samsung also trademarked ‘Always On Mode’ at USPTO quite recently, so it seems like the Galaxy S7 and Galaxy S7 Edge might also sport a similar feature, which is quite interesting.

The LG G5, if the rumors are to believed, will ship with a 5.3-inch QHD (2560 x 1440) display, along with 3 / 4GB of RAM and more than one internal storage option. You’ll quite probably going to be able to expand the device’s native storage, and a 2,800mAh battery will, reportedly, going to be included on the inside. This smartphone will be fueled by Qualcomm’s Snapdragon 820 SoC, along with an Adreno 530 GPU for graphics. The 16-megapixel OIS shooter will be placed on the back of this phone, along with a Laser Autofocus, and an 8-megapixel snapper will be available up front. The phone’s power / lock key will be placed on the back of the device, and will double as a fingerprint scanner. Android 6.0 Marshmallow will come pre-installed here, and on top of it, you’ll find LG’s custom UI.