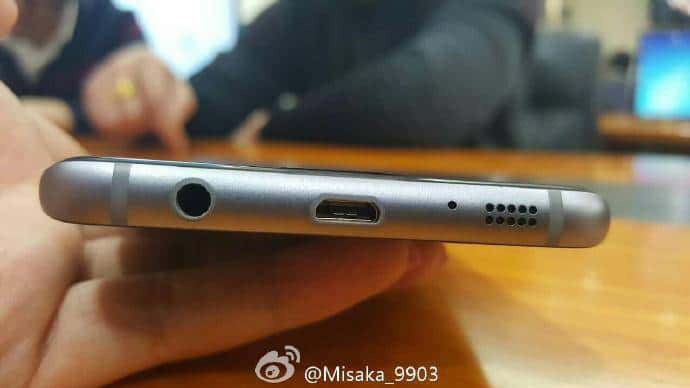 With Unpacked just a few days away, we're starting to see more and more leaks of the upcoming Galaxy S7 and the Galaxy S7 Edge. Both of which will be announced at the event in Barcelona on Sunday. Many have been wondering whether Samsung might jump on the USB Type-C bandwagon, after seeing many other smartphone manufacturers do so. Samsung had jumped on the micro USB 3.0 bandwagon too early and no one else adopted it. Likely a reason why they are sticking with micro USB at least for now, as you can see in the image above.

As you can see it is a micro USB connector, along with a 3.5mm headphone jack, a microphone hole and a speaker on the bottom there. That means no front-facing speakers here, but it's better than a rear-facing speaker. Although when you're gaming on the device, you're likely to cover up the speaker and that'll muffle the sound unfortunately. It's pretty similar to the Galaxy S6's layout, however the microphone hole is a bit higher up this time around – lined up with the top row of speaker cut outs versus the bottom row in the Galaxy S6. The micro USB port also seems to be a bit further up than last year's.

No real surprises here on the Galaxy S7. It was pretty much expected that it would feature a micro USB connector instead of a USB Type-C connector, although many of us would have much preferred them sticking with USB Type-C this year. Especially with more and more manufacturers using USB Type-C and forcing customers to buy new cables. On the bright side, this could mean more sales for Samsung, as customers won't need to buy new cables, like they would with USB Type-C. We'll find out once the device is announced and available for sale.

Rumors are pointing towards the Galaxy S7 going on sale as soon as March 11th. That's less than 3 weeks after their February 21st unveiling. And would be a first for Samsung, as they usually push out their Galaxy S model in April, nearly 6 weeks after the announcement.