The big, blue app is looking than smaller than ever right now in India, as their ambitious and expensive Free Basics project gets shot down in flames. What has been described as a “zero rating” service by a lot of net neutrality supporters has been effectively banned by the Indian Government. On Monday, February 8th 2016 India’s Telecom Regulatory Authority of India (TRAI) had issued “Prohibition of Discriminatory Tariffs for Data Services Regulations, 2016,” which should not only have a profound effect on net neutrality as a whole, but hit Facebook’s Free Basics plan right where it hurts.

As Facebook is an online business, it makes sense the firm needs more people from around the globe to come online in order to get more eyeballs to view ads and boost membership figures. Facebook had the bright idea of Free Basics (which was once known as Internet.org), a plan to offer up free access to the Internet for those in parts of India, but the plan had its holes from the very beginning and was always going to face an uphill battle. For those unfamiliar, Facebook would provide free Internet access but only to a select few websites. That selection would be made exclusively by Facebook, therefore limiting just what users can do online when using Free Basics. Imagine your local coffee shop offering free WiFi but only to a handful of selected sites and free WiFi becomes only free in price, not in name.

The new regulations introduced by the TRAI state that “disallow[s] service providers to offer or charge discriminatory tariffs for data services on the basis of content being access by a consumer” effectively clipping Free Basics’ wings before it takes off. This is a big move for Internet in India on the whole, as it will prevent other firms charging more or offering a discount to customers depending on what they want to do with their Internet connection. This is being hailed as a big win for net neutrality, and it’s easy to see why. As services here in the West, such as T-Mobile’s Binge On come under fire for net neutrality it’s refreshing to see India lead by example in their dealings with Facebook’s Free Basics program. 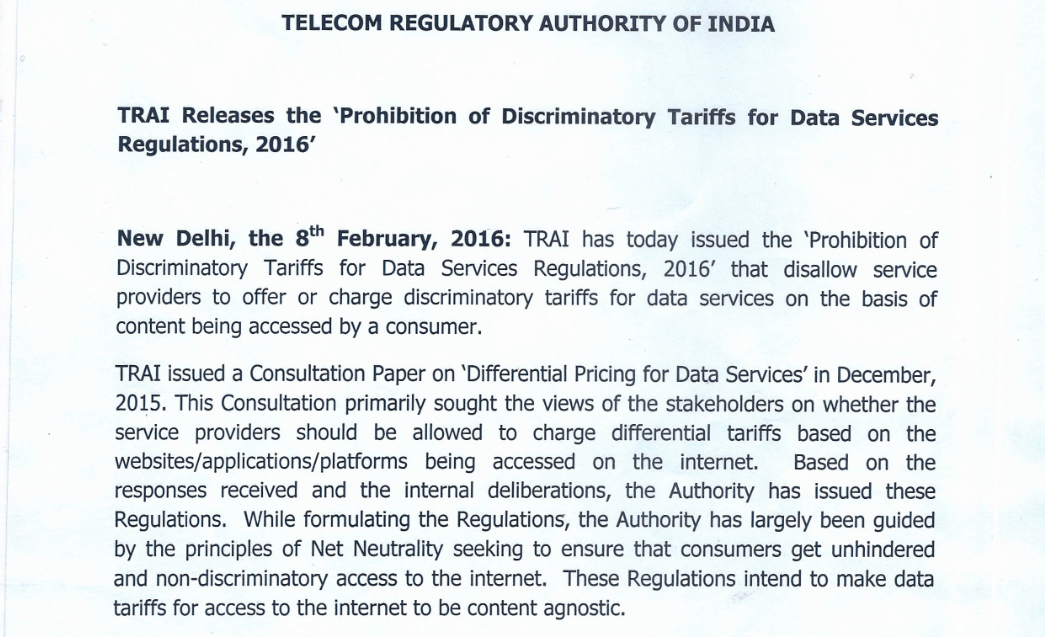