India is currently the second largest smartphone market in the world. A number of statistical confirmation arrived in the last couple of months which show that India is growing at an incredible rate, which means that the gap between India and China is closing, but Chinese smartphone market is still miles ahead of India. Tons of smartphone manufacturers started selling their products in India in the last couple of years, and the ‘Make in India’ initiative even convinced plenty of them to not only sell their smartphones in the country, but to manufacture them in India as well. There’s plenty more room for India to evolve and grow, but we’ll see what will happen in the coming years. That being said, 91mobiles, an India-based gadget research site, came up with a comprehensive report on the mobile phone landscape in India for last year. This report basically gives insight on how India’s smartphone market behave last year, which also reveals what might happen in the coming years, if the trend continues, of course. We’ll basically take a look at some of 91mobiles’ findings in order to get a better idea of which might happen. Keep in mind that this research is based on graphs, so you’ll find quite a few of those in this article, read on. If you take a look at the first graph above this paragraph, you’ll notice that phone launches in India grew immensely since 2013. 957 phones launched in the country in 2013, and 1,137 were released a year later, which represents a 19% increase. Now, this is a significant improvement, but if we take a look at 2015, things change even more. 1,622 devices were announced in 2015, which is a 43% increase compared to 2014. This is not a small different, as you can see, the growth is quite staggering, and analysts expect this to continue in 2016, maybe not at that scale, but the growth will continue. Now, keep in mind that the first graph above represents phones in general, both feature and smart phones. Well, the second graph above represents only smartphones, which is more interesting overall. So, 566 smartphones were launched in 2013 in India, while 691 and 895 units were announced in 2014 and 2015, respectively. If we look at the percentage, 22% more smartphones were launched in 2014 compared to 2013, while 30% more launched in 2015 compared to 2014. So, if we take feature phones out of the equation, things look somewhat different, but the growth is quite obvious regardless. 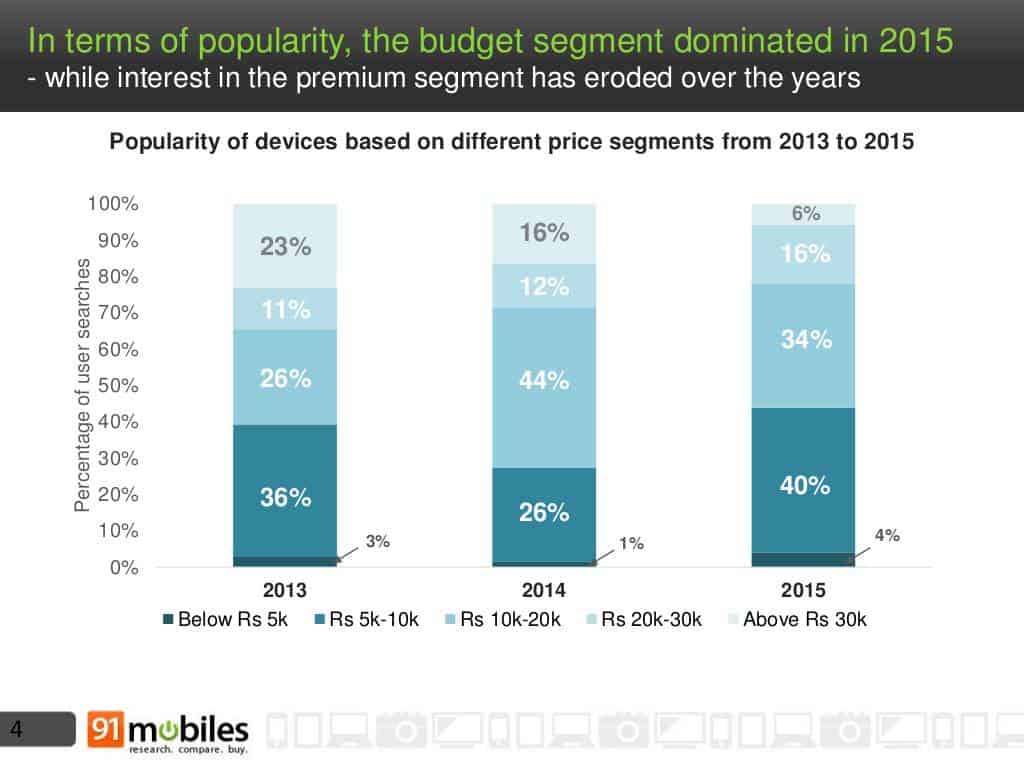 Now, as most of you know, budget devices are the most popular in India, which is why homegrown companies like Micromax and Lava tend to release tons of affordable phones throughout the year. If you take a look at the graph above this paragraph, you’ll get to see the popularity of devices based on different price segments from 2013 to 2015. Now, according to this data, the most searched devices in 2014 were those which are priced between Rs. 10,000 and 20,000, while the popularity of those priced between Rs. 5,000 and 10,000 rose in 2015, considerably. 40% of searches were for devices between Rs. 5,000 and 10,000, while 34% of people were interested in devices priced between Rs. 20,000 and 30,000. If you’d like to know more info, take a closer look at the graph above. 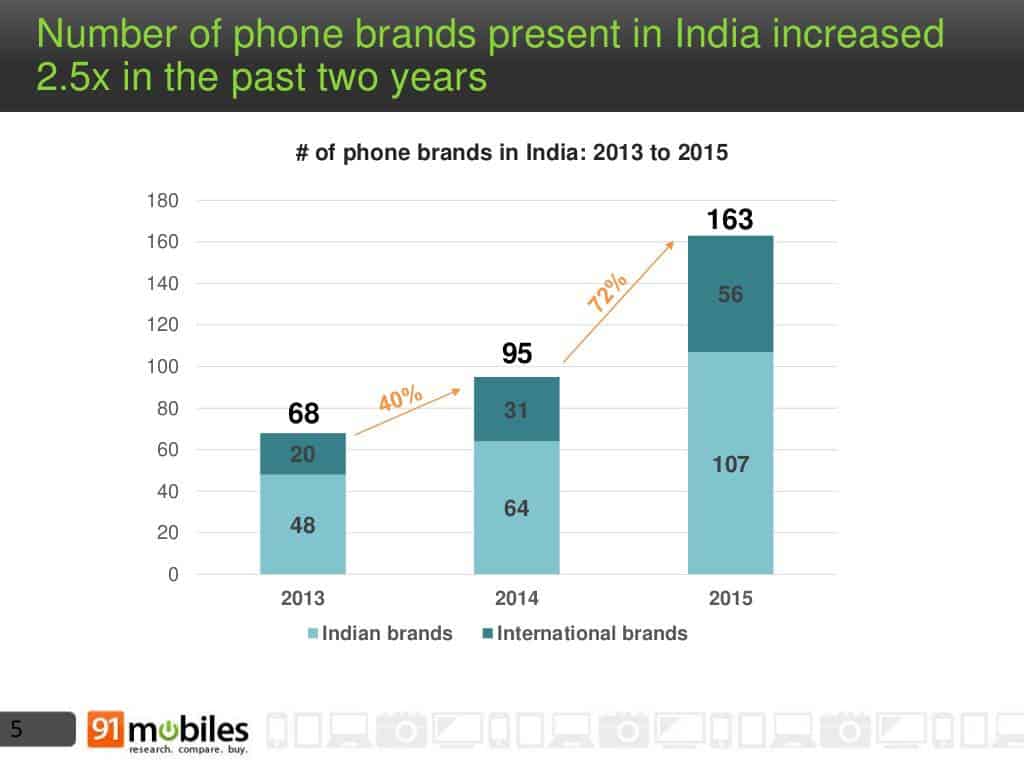 Another interesting piece of info came out of 91mobiles’ research, and it regards smartphone manufacturing companies which are active in India. The graph above shows us that 48 India-based companies were active in the country in 2013, while only 20 international brands were present. Now, looking at 2014 and 2015, you’ll notice the significant growth of both homegrown and international companies. There were 64 and 31 Indian and international companies active in the country in 2014, while that number grew to 107 and 56 in 2015. This represents an increase of 72% YoY from 2014 to 2015, which is quite staggering. This is quite probably the best representation of how fast this market is growing, and how many companies are interested to take a piece of it. Now, according to the first graph above, Intex launched the most smartphones in 2015 in India, by far. This India-based company has introduced 88 smartphones, and it is followed by Micromax (56), Karbonn (46), Lava (36), and Samsung (30). Looking at the second graph, you’ll get to see that Lenovo actually grew quite a bit, while Asus also marks an increase, while Sony didn’t fare all that well. A ton of debutants actually joined these ranks last year, including OnePlus and YU.