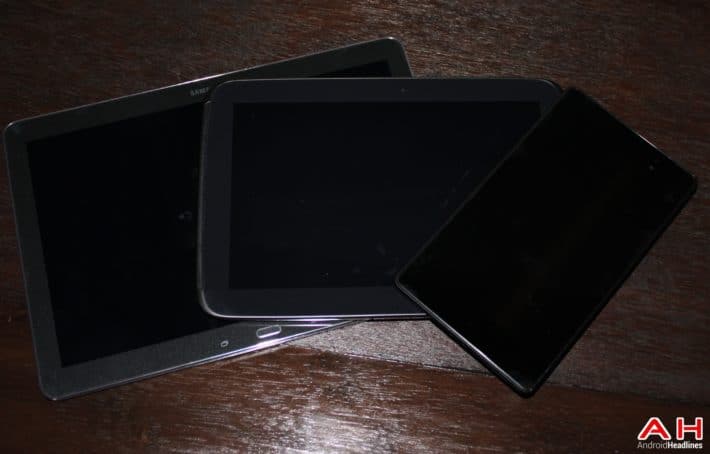 While the smartphone market may be slowing down, it is still registering growth, unlike the tablet market, which seems to be in a perpetual decline without any signs of revival any time soon. According to the latest data from market research and analysis company, International Data Corporation (IDC), the tablet market shrunk by over thirteen percent in the year-ending quarter compared to the same period in 2014, thereby capping an entire year of decline in the tablet market for the very first time since the category went mainstream earlier this millennium. Back in late October, IDC had reported about tablet shipments declining for the fourth straight quarter, so this marks the fifth quarter in a row that the market has seen a downturn. Amidst all this gloom and doom, the one silver lining, however, comes from the growing market for ‘detachables’, 8.1 million units of which, were reportedly shipped last year.

While market leaders Apple Inc. and Samsung Electronics continue to remain at the top in terms of total shipments, both companies are facing steadily-eroding market shares, if the latest data from IDC is to be believed. Lenovo, Asus and Huawei are apparently the three other companies on IDC’s list of top five tablet vendors last year. According to company’s quarterly tablet tracker, the worldwide tablet market contracted drastically in Q4, 2015, by as much as 13.7 percent on a year-on-year basis, and over twenty percent sequentially. While 76.4 million slates were reportedly shipped in Q4, 2014 by all OEMs combined, only 65.9 million left the factory premises this time around. As for the whole year, the numbers are just as dire. While vendors managed to ship an estimated 230.1 million units globally in 2014, only 206.8 million units were shipped last year on account of the ongoing downturn in the fortunes of the tablet industry.

As for the individual companies, Apple and Samsung continue to lead the overall market, although, with fast-diminishing market shares. While Apple managed to sell 21.4 million iPads in Q4, 2014, only 16.1 million units were ever shipped by the company in the corresponding period last year. That represents a loss of almost 4 percentage points of market share, from 28.1 percent to 24.5 percent. Samsung, meanwhile, managed to sell just about 9 million units last quarter, as opposed to exactly 11 million units in the last quarter of 2014, which represents a loss of almost 1 percentage point of market share, from 14.4 percent to 13.7 percent. While Lenovo has managed to hold onto 4.8 percent of the market (even on 13.5 percent lower volumes), the only companies to have actually improved their sales as well as market shares seem to be Amazon and Huawei.

Amazon went from 2.5 percent share of the market with 1.9 million shipped units to 7.9 percent of the market with 5.2 million tablets, thanks largely to the $50 Fire tablet the company launched last year. Huawei also managed to more than double both its shipments as well as market share in the quarter. The company went from 1.0 million units and 1.3 percent share of the global market in Q4, 2014 to 2.2 million units and 3.4 percent of the market in Q4, 2015. While Amazon’s figures represent a massive 175 percent YoY growth, Huawei also shows an equally impressive 124 percent YoY growth for the quarter. Huawei also happens to be the only company within the top five with higher shipments in 2015 compared to the previous year, with 6.5 million units shipped, as opposed to just 3.0 million units in 2014. 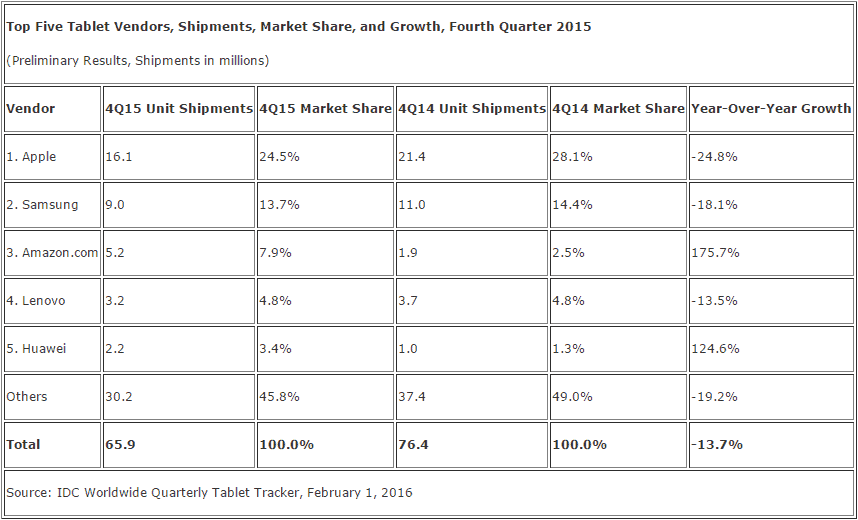 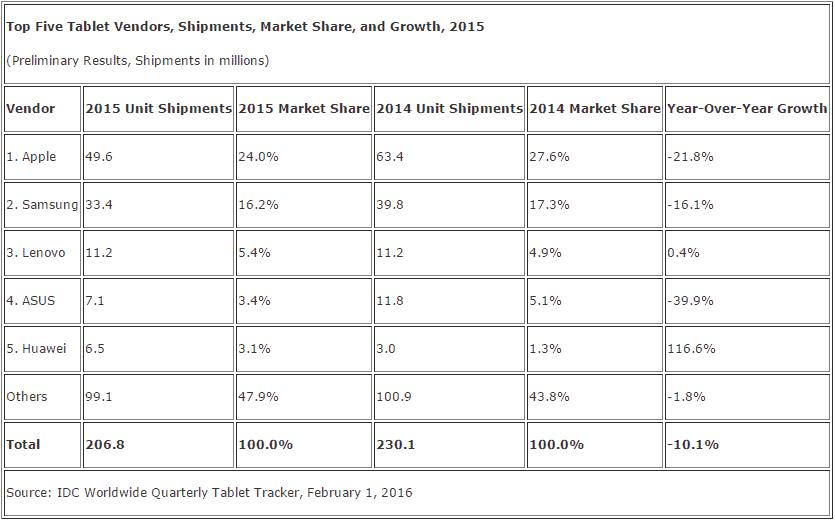