Huawei has managed to become world’s third largest smartphone manufacturer in 2015. The company enjoyed great success last year, and has released qutie a bit of compelling devices. The most notable Huawei-branded products are quite probably the Mate 8 flagship phablet, Android Wear-powered Huawei Watch smartwatch, and the Nexus 6P smartphone which this company manufactured for Google. Now, the Huawei P8 lineup is also worth mentioning, not only are there three really compelling phones included in this lineup, but the company has been selling quite a few of these phones.

Speaking of which, Huawei has just reached out to us and shared some P8 sales info. The company says that the Huawei P8 Lite sold in over 10 million copies at the moment, and that they sold 16 million Huawei P8 units in general (P8, P8 Lite and P8 Max). Huawei has also mentioned that most of these sales occurred outside of China, which is quite interesting, Europe must have been a big market for Huawei last year, they’ve sold quite a few of those devices to European consumers. On top of all this, Huawei has also mentioned that they’ve managed to sell 12 million smartphones last month, which is a 93% increase compared to the same period last year. This actually means that Huawei managed to ship over 10 million devices four months in a row, which is quite commendable. Analysts were claiming that Huawei shipped 109 million smartphones last year, and Huawei more or less confirmed that, they say that they shipped 108 million handsets, which is close to predictions made by analysts. Now, this also means that the company managed to sell 44% more devices in 2015 compared to 2014. Huawei P8 Lite has been quite a success for the company, a device which sports a 5-inch 720p display, 2GB of RAM and is fueled by the Kirin 620 octa-core SoC. The P8 Lite actually offers a really sleek design, and very much resembles the P8 and P8 Max.

Judging by the numbers the company shared, Huawei’s year started off great. It will be interesting to see how long can they keep this up and sell over 10 million devices a month. So, what’s the next step for Huawei? Well, the Mobile World Congress (MWC) in Barcelona is right around the corner, and we do expect to see new hardware introduced during the show, but we’re still not sure what to expect. Either way, the company is expected to introduce P9 devices in the coming months, and we’ll see what happens after that, stay tuned. 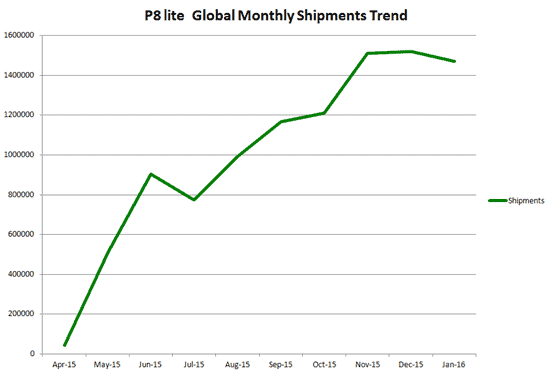