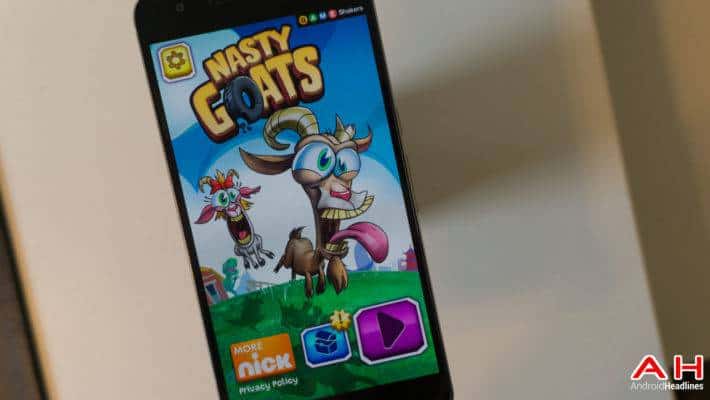 Now here's a pretty interesting new game from the folks at Nickelodeon. It's called 'Nasty Goats' and the premise of the game is quite simple. There's a bunch of Nasty Goats on the loose, as they have escaped from their farm to go and eat some garbage. What you're there to do is to eat as much junk as possible, before they are captured by the farmer and put back in their home. Which Nickelodeon says is a "boring home". Sounds like a pretty simple game, and it is. Nickelodeon also says that you can play a real game from their new TV Show, Game Shakers.

Within Nasty Goats, there are 5 different locations as well as a secret hidden one that is to be found while playing the game. There are also 6 different goats to play and also connect, as well as 13 power ups that will help keep the goats eating that junk. Within the game, there are 50 different wearable items that you can use to customize the nasty goats and finally, you can do crazy combos to add bonus points to your score.

Nickelodeon notes in their app description that the game does collect user data. They also note that this is in accordance with the appropriate laws like COPPA. Nickelodeon says that user data can be used to respond to user requests, as well as enabling users to take advantage of certain features and services. Most apps collect user data like what Nickelodeon collects, however it is nice to see that they are pretty up front about what they collect instead of doing so behind your back. Definitely a good way to go about things.

Nasty Goats is a completely free game from Nickelodeon. There are no in-app purchases whatsoever within the game – however that could change in the future as there's currently no way for them to monetize this game. There are no ads either. Nasty Goats works with Android Tablets and Smartphones running on Android 4.0 Ice Cream Sandwich and above – which should cover the vast majority of devices out there today. You can grab Nasty Goats from the Google Play Store today.

Trusted By Millions
Independent, Expert Android News You Can Trust, Since 2010
Publishing More Android Than Anyone Else
34
Today
152
This Week
152
This Month
3318
This Year
104795
All Time
Advertisement