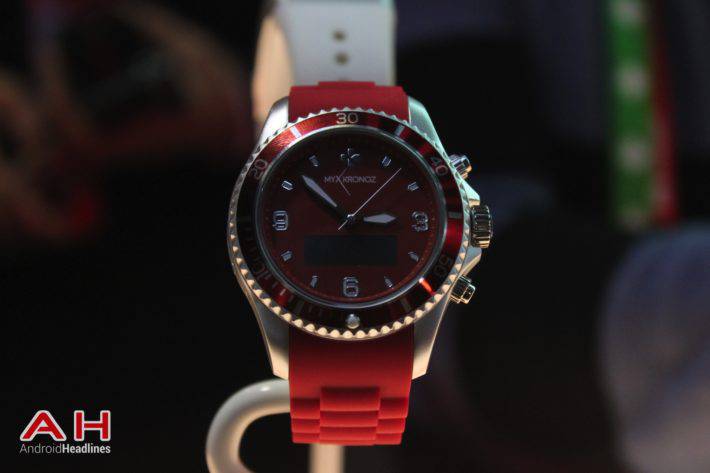 Android Wear might not have been all the rage at this year's show in quite the same way it was last year, but the smartwatch is alive and well during this year's show. As we found out looking at the likes of the ZTE Axon Watch as well as the more surprising Haier Watch. From Switzerland however, comes a range of different smartwatches that offer different sorts of features and are all fairly affordable compared to other options out there. We've been taking a look at no less than six different options from MyKronoz during MWC 2016, and have a handful of pictures showing off each of them.

Starting with the ZeSplash 2, this is a device that is – unsurprisingly – designed to be as waterproof as possible, with an IP66 rating. It's available in a range of different colors, and will offer the standard smartwatch capabilities of tracking your activity, pumping out notifications and more. There's an image in the gallery below that has all of the relevant specs and such, but the highlight here is perhaps its price of â‚¬130 and the ability to make and take phone calls from the watch.

Stepping down to something a little more low-key is the MyKronoz ZeWatch 3, which is a pretty standard device, truth be told. There's a simple OLED display here, which only displays the time and other indicators, but will display notifications, but with little detail to them. This is â‚¬80 and will, as the ZeSplash 2 will, allow users to make and take phone calls from your wrist. It's plain to see that the ZeWatch 3 is purely a device to allow people to get a little something extra out of their watch, but then again the sub-â‚¬100 price tag is quite attractive.

The ZePhone however, is a pretty interesting device as it's not just a watch, but also an Android 4.2 smartphone complete with a homescreen and the ability to install apps. Obviously, this means that the device is a little bulkier in its appearance, but with room for a SIM card and all the trimmings, it's not surprising this looks a little larger in person.

On to the ZeTel, and astute readers will notice a little Galaxy Gear look and feel here, complete with a Samsung-style speaker grill and home button. Much like the above ZePhone watch, the ZeTel is a smartphone, but is only capable of running on a 2G network. This features the ability to make and take calls, and can also be used as a smartphone, albeit with a tiny screen and slow network speeds.

On to something a little more exciting, the ZeClock is a standard-looking sort of analog watch with smart features built right into the device. What's nice about the ZeClock here is that it features an OLED display for notifications and such, but also the ability to make and take phone calls from your wrist. Which might be a recurring feature across the MyKronoz line, but it's something that few analog-come-smartwatch devices can offer people these days. The only thing that doesn't seem too nice here is the fairly cheap-looking strap, but for just â‚¬100, there's not much more we could expect, really.