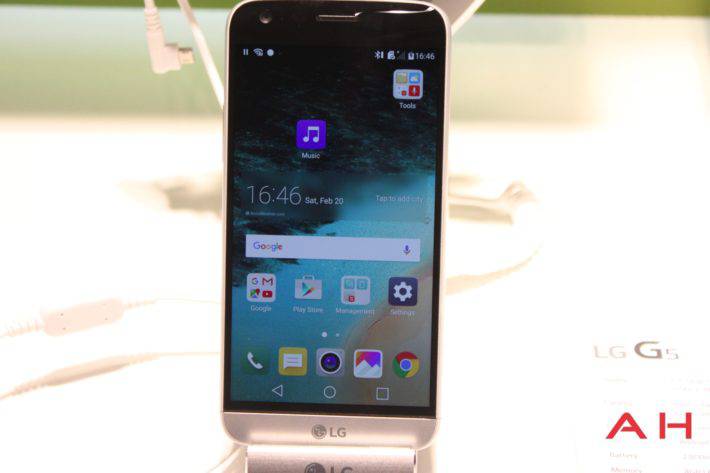 This year there wasn't just one South Korean smartphone manufacturer the world was looking forward to seeing, but two. LG have bought the fight to their staunch rival Samsung during this year's Mobile World Congress and have announced the G5 just hours before Samsung. We've been covering all things LG today, and have the full announcement to read and a closer look at what's on the inside here. For now though, we've been able to take a look at what LG's latest flagship Android smartphone looks and feels like, with a raft of images and remarks below.

The LG G4 was more of the same in terms of design from LG, but this year LG have thrown out the rulebook and started again from scratch. The modular-type G5 features a more modern design, one that's reminiscent of last year's Nexus 5X and Nexus 6P to some, but also distinctly-LG to others. One notable difference is that the display has shrunk from the 5.5-inch size we've come to know and love to a more manageable 5.3-inch display. On the whole, it feels like a step forward for the firm, but those hoping for more of last year's leather-looks might come away disappointed this time around. Instead, the G5 is a fully-metal unibody design, save for the party-trick that is LG's Magic Slot found at the bottom of the device. Despite the 5.5-inch display, LG have once again outdone themselves with their screen-to-body ratio, creating a compact device that belies its large display.

This year, LG wanted to introduce a smartphone that could offer extra features to different types of users on demand, and they've done that through the Magic Slot. The bottom of the G5 comes away to allow for accessories to be interchanged into the phone itself. These include the CAM Plus extension to offer more physical controls and better battery life, an external audio DAC developed in conjunction with Bang & Olufsen and the removal battery option. This is perhaps the best way LG could stick it to Samsung regarding expandable storage and removable batteries, while also taking it to a whole new level.

In the hand, the G5 will feel noticeably different to those familiar with either the G3 or G4, but is thin enough and light enough to be held comfortably for long periods of use and can even be used in one hand with little to no fuss. It's got the distinctive LG plate at the bottom of the phone, as well as the curve at the top of the phone, but for the majority of users this will feel like a big departure from LG's previous designs. Regardless, people can take a closer look in the gallery below.