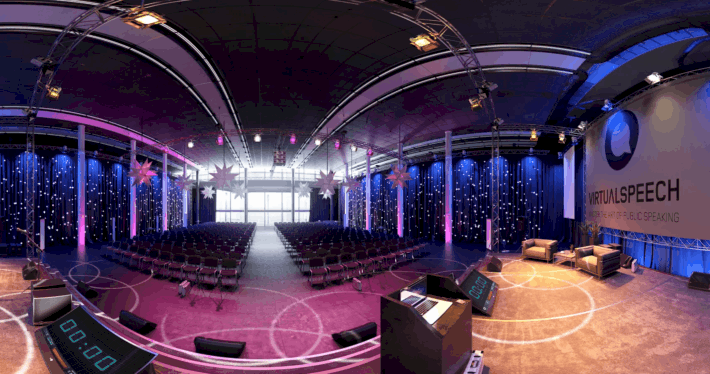 Many of us are a bit scared of speaking in public. Whether it's in front of a handful of people, or hundreds of people, it can be pretty frightening. Many techniques for practicing public speaking have included doing your speech in front of a mirror. But now, with Cardboard you have another way to practice. And perhaps a better way to do so.

On Friday, Public Speaking for Cardboard launched on the Play Store. The app is pretty simple, it puts you in front of a crowd, to basically simulate how it would be to be speaking in front of a crowded room. There are a few different environments included here. One is in front of a ton of people, like if you were delivering the keynote at Google I/O, others include in a board room meeting with fellow executives and such. It's a great way to practice speaking in public and attempt to get over your fear of speaking in public. Something that everyone is scared of.

With this being in Cardboard, you're able to look around in 360-degrees and see the entire room while you're practicing. Really making it feel like you are actually there speaking in public. Unfortunately, since this is on Cardboard and not Gear VR, you will have to hold the headset up to your face while you look around, however it's still a great app to check out if you have Cardboard.

Google's Cardboard seems to be more about being useful instead of great for media. While Samsung's Gear VR, the Oculus Rift and HTC Vive have all been about playing games, watching videos and more, Google Cardboard has apps like this Public Speaking app, as well as field trips, allowing kids in a class to take a virtual field trip to many places including the White House for Christmas. Google Cardboard is also much cheaper than its competitors. Coming in at under $20 (depending on where you pick it up from), and as the name states, it is quite literally made of cardboard. Additionally, it supports Android and iOS devices up to 6-inches. Meaning that it supports just about every device. Public Speaking for Cardboard is available on the Play Store now.

Public Speaking for Cardboard
Advertisement
Trusted By Millions
Independent, Expert Android News You Can Trust, Since 2010
Publishing More Android Than Anyone Else
0
Today
253
This Week
254
This Month
4999
This Year
106474
All Time
Advertisement