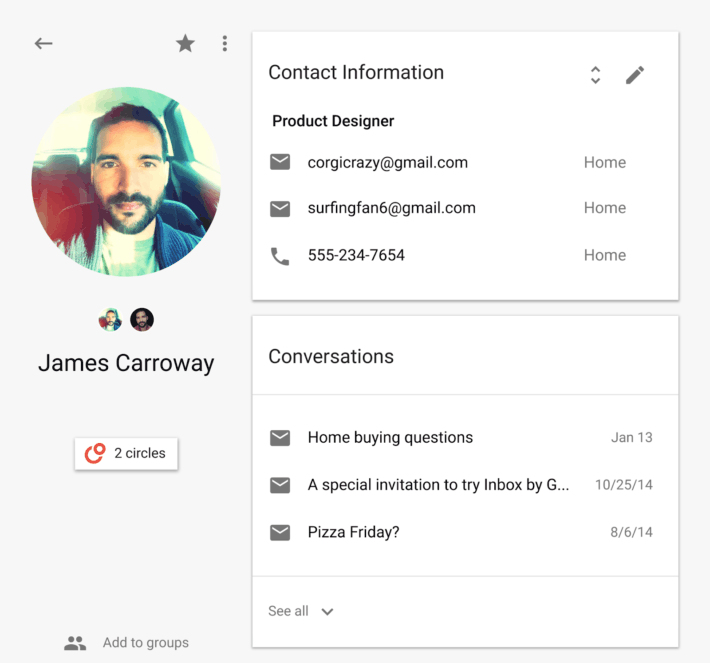 Google is always steadily giving developers more tools to work with to better their applications and to more easily integrate features of Android into them, and this usually consists of a combination of improved Android software functionality and new and improved APIs. The latest new tool developers can now work with is the People API which Google is introducing so developers can have easier access to contact data once a user has granted the application permission to view it. This new API dedicated specifically to the data of contacts of users makes things easy and straightforward for developers as they will no longer have to access the Google + API and the contacts API for a compiled set of what was basically the same data.

To that end, Google states that the Contacts API will eventually be phased out, because the new People API uses the latest technologies and protocols to get the same job done, so essentially there will be no need for the Contacts API anymore. For the developers who understand the language of Google's technical breakdown of the new API, it's built using HTTP and JSON which Google states will allow any standard HTTP client to "send out requests and parse the response." Things won't just automatically work though, because apps will still need permission to view any data which the user must grant.

The largest benefit for developers is the fusion of sources for the contact data they used to have to call out to into one single API. This puts a more efficient spin on things for developers. That isn't the only benefit of the People API though as Google notes that it also afford developers access to new information that wasn't previously available, including birthdays, personal addresses, phone numbers, and emails. Again though, this is all data that is only accessible if the user first grants permission to the app, so the new API is not allowing developers unfettered access to private data with a user's knowledge. If you're a developer and are interested in working with the new People API, you can gather all of the needed details from the official Android Developers blog post on the announcement.