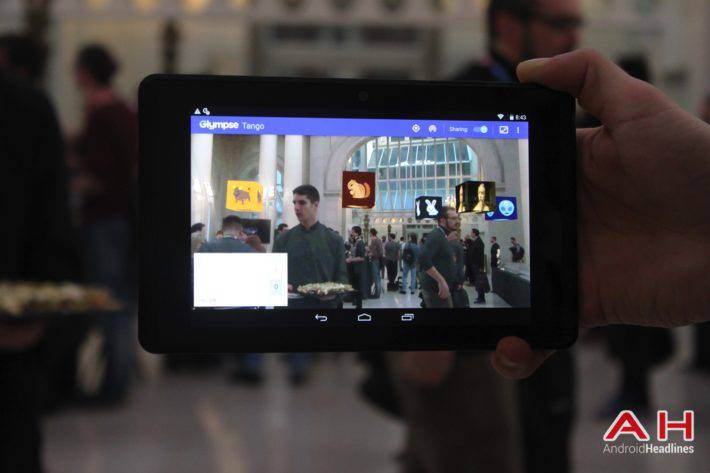 Project Tango may not yet be in the hands of consumers, but Google's endeavors into the realm of augmented reality continue forward. Following the announcement from CES earlier this year about their partnership with Lenovo to build a Project Tango smartphone, Google's Project Tango technology is now being paired up with real-time, temporary location sharing service called Glympse that could bring consumers some rather impressive functionality. Using a combination of the cameras and the depth sensor on the back alongside Glympse's real-time location sharing and Google's navigation mapping technology, using a Project Tango device would allow anyone to do a number of different things from finding a lost party member in a shopping mall or a crowded sea of people, to navigating around various public areas.

During the first day of Mobile World Congress this week, we had the pleasure of checking out this technology in action at the Lenovo/Project Tango press event, and during our time there we were taken on a tour around the Museu Nacional d'art de Catalunya, using the Tango tablet as a means to navigate ourselves around the museum floor to the next piece of art for viewing. Through Google's indoor mapping technology and navigation mapping, the tablet was capable of directing us with augmented reality visual navigation, displaying a visible line when pointing the tablet's cameras at the floor.

Once the point of interest was reached, a marker would pop up alerting you that you have arrived. Where Glympse comes in is through the real-time location sharing technology. Using a Tango tablet, one could view other people on screen displayed as an AR avatar. You can see this in the image above. If you've never heard of Glympse before, their service allows users to temporarily share their location with people in real-time, and permission has to first be given to another user by the person who is sharing. This allows for more of a level of privacy, and utilizing Google's mapping technology, the shared locations can then pop up on screen. These examples described here are just the tip of the iceberg with many more possibilities awaiting, and working with Google is not the first time Glympse has seen their services in devices that the public use every day, as they have also just announced that they have partnered with Samsung to allow Galaxy S7 owners the same location sharing capabilities from various apps. With Lenovo's Project Tango phone on the horizon and still on track to be coming this year, many more consumers will have the opportunity to experience these kinds of features.