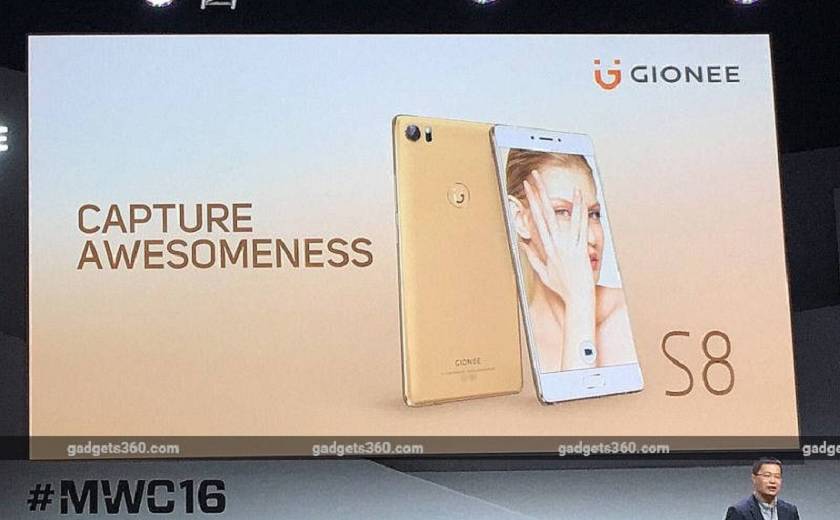 This year's edition of Mobile World Congress is going on in Barcelona, Spain, and since it is one of the largest consumer technology shows in the world, several tech companies announce some of their best products for the year. This is a special date for Android fans since Samsung, LG and other big players release some important smartphones. This year the stars were the Galaxy S7 & S7 Edge and the LG G5, but there's much more than LG and Samsung in the show. Gionee, a Chinese phone maker famous for its sleek, thin metal Android smartphones has just announced its latest flagship, the Gionee S8.

The device features an all-metal body with invisible antenna lines and thin bezels to give it a nice look. There's a 5.5-inch Full HD (1080×1920 pixels) resolution AMOLED display and it is pretty thin for its size, at only 7mm thick. Despite the "low" screen resolution, the hardware is on par with flagship phones. Powered by an octa-core Helio P10 SoC by MediaTek, the S8 has 4 GB of RAM and 64 GB of internal storage. The main camera comes with 16 megapixels, a phase-detection autofocus coupled with a laser sensor, and an LED flash. The home button has a built-in fingerprint scanner and to juice up everything, there's a generous 3000 mAh battery, which should offer respectable battery life since the screen resolution is not that high. Additionally, the S8 has 4G LTE dual-SIM functionality capable of global roaming.

On the software side, the handset is powered by Android Marshmallow with Gionee's Amigo OS 3.2 Android overlay on top. The company put some interesting features there, including "dual WhatsApp" and "dual WeChat", which allows two instances of WhatsApp and WeChat to run on the phone, meaning you can have two accounts at the same time of these services. The Camera app also got a revamped interface and now there's optical image recognition (OCR), which can detect text from images – although only tests will tell how well it performs in real life. Additionally, the device comes with 3D Touch (yes, the same name Apple uses), which offers pressure-sensitiveness for the display.

Priced at $494 (â‚¬449), the Gionee S8 will be available in several markets, arriving in Europe and India by the end of March.