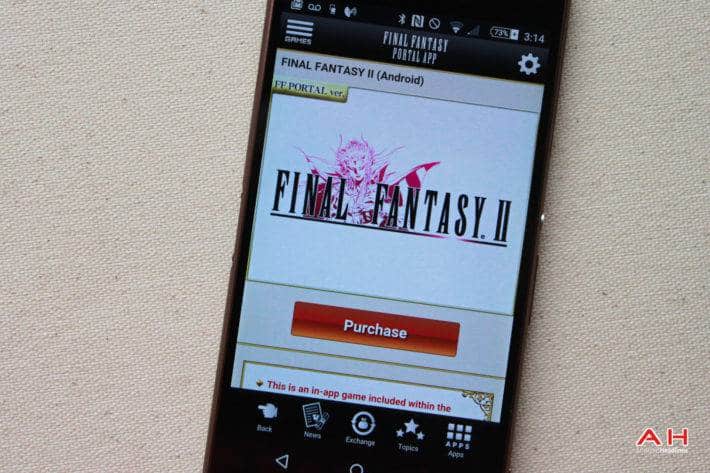 It's been just over a year since the Final Fantasy Portal App, which serves as an aggregator of news related to the popular series of Japanese role-playing games, launched on Google Play Store. As of yesterday, the app is in full celebration mode and is giving away the Android port of Final Fantasy 2 free of charge. This isn't an insignificant gift either, as FF 2 is not only a solid installment in the series that is always present in lists of best Android RPGs in one way or another, but the regular version of the game still sells for $7.99. That's right, this free, anniversary version of the classic RPG technically isn't the "regular" one, but the only difference between it and the mobile game you can still buy on Play Store is the fact that the app claimed through the Final Fantasy Portal App can only be launched through the Final Fantasy Portal App. It's to be presumed that's also how potential future updates of the game will be delivered, though, given the fact that FF2 hasn't been updated since February 26th of last year, it's questionable if another day when there's a new version of the app to download will ever come again.

This cult classic was originally released on Family Computer, i.e. Nintendo Entertainment System in 1987, but has received 13 new versions on 12 other platforms since then. Remakes, ports, reimaginings, ports of remade reimaginings, you name it – Final Fantasy 2 has it. Therefore, the Android version of the game released in 2012 is actually a port of the 2007 PlayStation Portable remake of the original, almost three decades old RPG which comes with higher-resolution 2D graphics, a remixed soundtrack, and full motion video (FMV) sequences. The latter refers to videos much longer than normal cutscenes which usually use completely different character models and appear during important plot moments of games which utilize them. Remember those cutscenes between chapters of Final Fantasy Tactics: The War of the Lions? You've guessed it – those are FMV sequences and are used in most PlayStation, PSP, and Nintendo DS remakes of earlier FF installments.

You can get your free copy of Final Fantasy 2 by downloading the FF Portal App from the Play Store and clicking on the first announcement from the top where you'll see a big "Purchase" which you will use to "purchase" the game for $0.00. Again, this seems like a really sweet deal and who knows, maybe those extra patient mobile gamers will get to see the upcoming FF IX free of charge sometime in the future as well?