Samsung's latest refresh of its affordable Galaxy J-series of smartphones have already started hitting the headlines as well as store shelves in some markets around the world. While reports on the more entry-level Galaxy J-series models like the J1, J3 and J5 (2016 editions) have been plentiful, some of the specs on the comparatively more premium Galaxy J7 (2016 model) have also recently started leaking out, thanks to the device showing up on the GFXBench database earlier this month. While that particular listing was for the Snapdragon-powered version of the handset, the latest development regarding the upcoming gadget seems to suggest that there will also be an Exynos version of the latest iteration of the Galaxy J7, much like its last year's first-gen avatar.

This latest revelation, too, comes by way of a listing on the GeekBench database, but this time around, the model number of the device happens to be SM-J710FN. According to the listing, the chipset powering the handset will be the Exynos 7870 SoC, which is part of the Exynos range of mobile chipsets that are designed, developed and manufactured in-house by the South Korean consumer electronics giant. As for the rest of the hardware specs of the SM-J710FN, the quad-core CPU that's a part of the Exynos 7870 SoC is clocked at a frequency of 1.69 GHz, and the device sports 2 GB of RAM. The Snapdragon variant, however, will likely come with 3 GB of RAM, as per previously revealed specs. The phone is also listed to run Android 6.0.1 Marshmallow out of the box, which is definitely something to look forward too.

Overall, the latest device seems to be a decent upgrade over the original Galaxy J7 that was launched last year, seeing as this one clocks 793 points in terms of its single-core performance, and 4368 points as its multi-core score. While we are still no closer towards getting an official release date or the pricing for the device, it is likely to be fairly affordable, seeing as Samsung is making a concerted effort to win back some of its lost customers in a number of critical emerging markets around the world, where mid-range handsets still rule the roost. 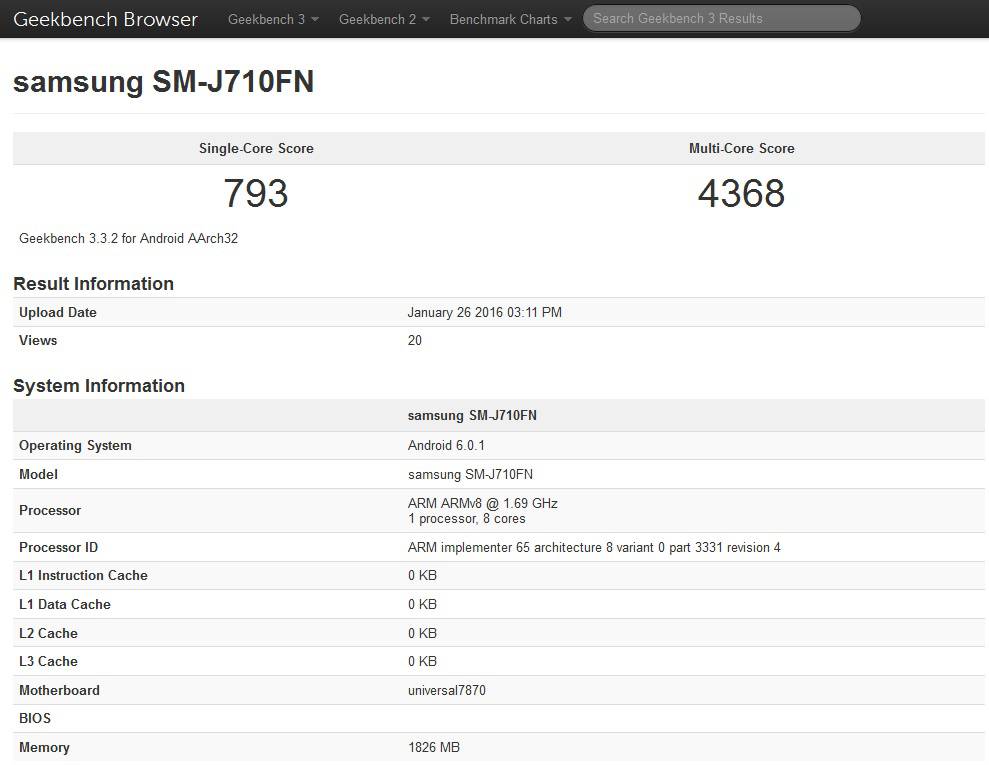