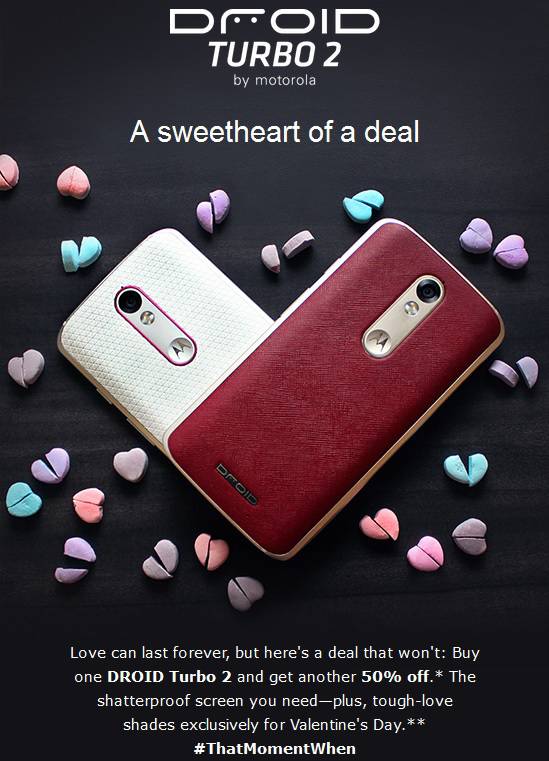 Valentine's Day is almost upon us, and businesses everywhere are leaving no stone unturned to make sure that they can get as much mileage out of it as possible. While the hospitality sector is expected to have a busy time catering to young couples, consumer electronics companies are also looking to use the event to their advantage by rolling out deals and discounts so as to lure users to choose their products over those of their competitors'. Motorola Mobility is one of those companies which is aiming for a big week leading up to the Valentine's Day weekend, and is currently running a discount offer on its latest premium smartphone, the 'shatterproof' Droid Turbo 2. According to the deal being offered by the Lenovo-owned company, those buying a Moto Droid Turbo 2 will be eligible to get a second one at a 50 percent discount.

The offer actually went live on the 19th of January, and will be valid till the 25th of this month, so that's about another three weeks or so before time runs out on those who are interested in taking advantage of the promotional offer. Motorola is marketing the scheme under the tagline, "A Sweetheart of a Deal", as part of which, the company is offering as many as four "Sweethearts Special Edition designs" – "I'm Yours", "You're Mine", "Be Mine" and "All Mine". The phone of course, can also be personalized by users according to their choice and taste, thanks to Motorola's Moto Maker customization options. The device costs $624 at full retail, but customers with good credit can get it for zero down and $26 per month over a two-year period.

For those as yet unfamiliar with Motorola's latest premium handset, the Droid Turbo 2 is a smartphone that was launched exclusively on Verizon in the US. Internationally, the device is marketed as the Moto X Force, but is essentially the same device underneath, with support for different LTE bands as applicable for the regions they're being sold in. The Droid Turbo 2's USP happens to be its 'ShatterShield' display, which renders its screen virtually unbreakable. Motorola has already launched the device in multiple markets around the world, and the company's CEO has promised the launch of more such handsets with ShatterShield displays this year.