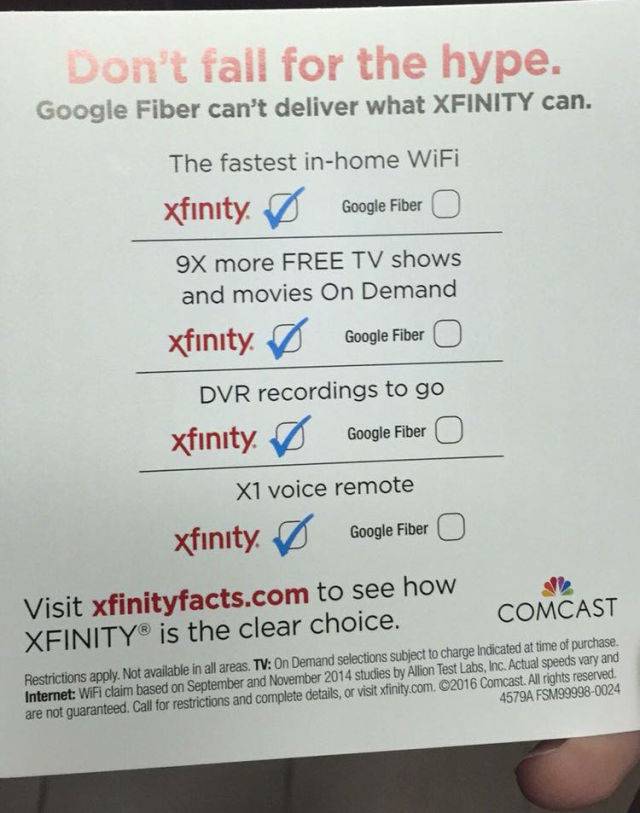 Google has recently announced a rather aggressive plan to expand Google Fiber in 2016. Google Fiber, being Google's own cable and internet service, is superior in some cases to similar local offerings in price, performance or both. Many were excited to hear that Fiber was planning a wider roll out, but not cable companies. Traditional cable providers are already feeling plenty of heat from Silicon Valley and the mobile industry with the upcoming spectrum auction, as well as the FCC threatening to upend the standard practices revolving around cable boxes, one of the most profitable sectors for providers. One provider in particular, Comcast, sees the writing on the wall and is making moves to keep customers around. The card pictured above, received in the mail by Reddit user TheBen91, is one such move.

In Atlanta, Georgia, some apartments and condos are already seeing Google Fiber become available, with a wider residential and business roll out destined for the near future, if all goes well. The nation's largest cable provider, Comcast, is one of the dominant forces in the cable scene in Atlanta and they'd like to keep it that way. Reddit user TheBen91 said of Comcast's pleas, in particular the card above, "So I got this in the mail today. I think someone is scared of Fiber coming to Atlanta,". Notably absent from the mailer is any mention of rates and caps, with speed data pulled from a study that Allion Test Labs, Inc. did back in 2014. While Google Fiber offers a basic plan with 100 megabit speeds for $50 and a gigabit plan for $70, Comcast offers a 2 gigabit plan for $300 a month, as well as more basic packages. All of their packages, however, include a cap; after 300 gigabytes, users must pay $35 to have unlimited access. Google Fiber has no such restriction.

Comcast's customer service issues may be additional incentive for some users to switch. The issues are fairly well documented, including a comment in the via link at Ars Technica; "I've been getting the same thing in Nashville ahead of Google Fiber… The first one showed up right before my Comcast cable and internet went out all night." Google's Fiber installers are said to arrive on time for at least 96 percent of all appointments, while Comcast has a two hour approximate window. Many users commenting on TheBen91's Reddit post took the chance to make fun of Comcast's apparent fear of Google Fiber, with one user pointing out that Fiber's arrival may be the reason that Comcast is rushing to get gigabit service to Atlanta.