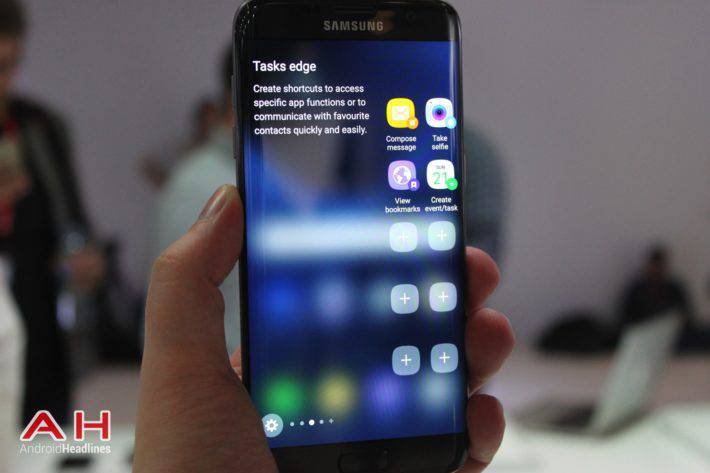 The Galaxy S7 Edge is one of two new devices Samsung announced at MWC in Barcelona today. While both of the handsets are likely to be in high-demand, there are some notable differences between the two and for those looking for a more feature-rich handset, they are unlikely to find a smartphone more feature-heavy than the Galaxy S7 Edge.

Of course, the first and most obvious feature on offer with the Galaxy S7 Edge is the use of its dual curved edges. These edges will make use of specifically designed Edge software to offer a more interactive and customized experience. Much like on last year's model, although this updated model will come with great improvements in this area. As a result, Galaxy S7 Edge users can make use of the standard Edge mode to display information from apps which are compatible with the Edge display. While there is also a much more expanded compatibility with more apps now able to be fully used from the Edge screen. New Edge features include "Tasks Edge" and "Edge Panel". The first allows for specific tasks to be set and then used as shortcuts, while the second is more of a quick access solution to select widgets.

Moving past the Edge specific functionality and the S7 Edge will see the return of two particular features which will likely be very welcomed by the Samsung masses. The first is the reintroduction of a microSD card slot. This will mean that although you have only 32GB internal storage, you will not be limited to the internal storage on-board and instead, will be able to make use of up to 200GB of expandable storage. The second return to form is the use of an IP68 rating which means the Galaxy S7 Edge will be water-resistant. Of course, it is not waterproof, but it will be far less prone to water damage and certainly more than its predecessor. One more feature worth pointing out is that the Galaxy S7 is also seeing a bump in its battery capacity. This is a bump compared to the Galaxy S7 and a massive bump compared to last year's Galaxy S6, as the Galaxy S7 comes equipped with a massive 3,600 mAh battery in tow. This in addition to the wireless charging feature which was introduced on last year's model and of course, quick charging.

It is worth keeping in mind that these features are not the 'be all and end all' of the features on offer, as both the Galaxy S7 and S7 Edge will also come equipped with a number of (now) staple Samsung features like Samsung Pay – which will allow for the use of the smartphone as a method of payment and at a very large number of retailers due to its ability to be used with NFC as well as MST technology.